MCAULIFFE: VIRGINIA WILL REGULATE CARBON EMISSIONS; 'THE THREAT OF CLIMATE CHANGE IS REAL'... 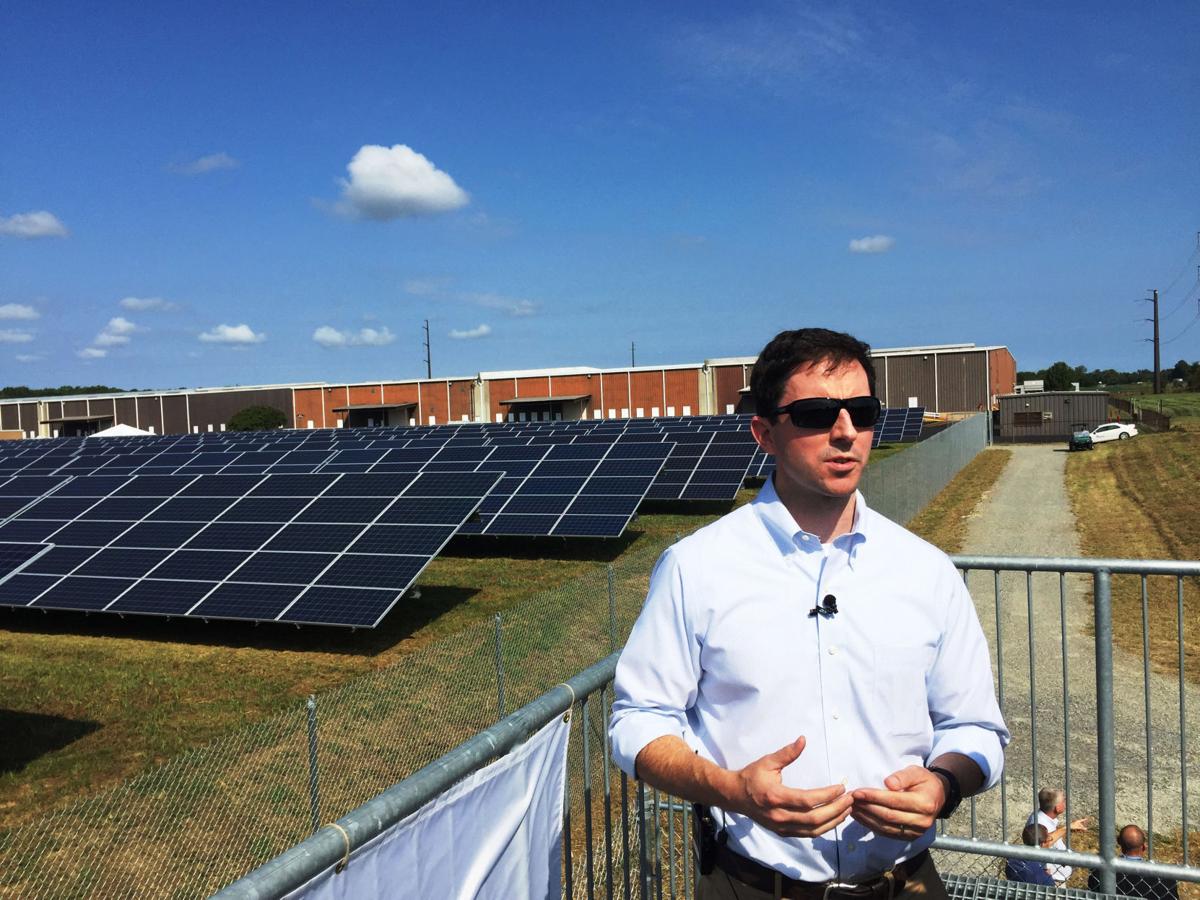 Nathan Frost, a Dominion manager, talks in September about the company's solar array installed at the Philip Morris facility on Bermuda Hundred Road in Chesterfield. Hundreds of megawatts of solar capacity are under development in Virginia, part of the company's push to expand its renewable portfolio. credit: Robert Zullo

Gov. Terry McAuliffe today directed the Virginia Department of Environmental Quality to begin assembling regulations to reduce carbon emissions from Virginia power plants, a move that was celebrated by environmentalists and renewable energy businesses who see the state as a laggard when it comes to solar and wind capacity and energy-efficiency programs...

Virginia Republicans, however, condemned the Democratic governor's carbon directive as overreach that would raise electric prices and hamper economic growth.

"The threat of climate change is real, and we have a shared responsibility to confront it. Once approved, this regulation will reduce carbon-dioxide emissions from the commonwealth's power plants and give rise to the next generation of energy jobs," the governor said in a statement. "As the federal government abdicates its role on this important issue, it is critical for states to fill the void. Beginning today, Virginia will lead the way to cut carbon and lean in on the clean-energy future."

Though it does not lay out the 30 percent reduction in carbon emissions by 2030 that environmental groups wanted, McAuliffe's executive directive instructs the DEQ to develop a proposed regulation for the State Air Pollution Control Board to abate, control or limit carbon dioxide from power plants that will "allow for the use of market-based mechanisms and the trading of carbon dioxide allowances through a multi-state trading program." The proposed regulation is due to be presented to the board by Dec. 31, just before McAuliffe leaves office.

Last summer, McAuliffe convened by executive order a working group consisting of cabinet officials and leaders of the state Department of Environmental Quality and Department Mines, Minerals and Energy to develop recommendations on cutting carbon from power plants. The market-based carbon trading aspect was a key component of the group's report, which was sent to the governor last week.

Dominion Energy, the state's largest utility, has recently pointed to its own emission reductions, a push toward developing new solar installations and acceptance of carbon regulation as "settled public policy."

"Dominion has been preparing for carbon regulation for some time now and appreciates being a part of the stakeholder engagement process," spokesman David Botkins said, adding that the company's two new gas-fired power plants in Brunswick and Greensville counties are subject to some of the strictest carbon-dioxide limits "on record."

Environmental groups, who were some of the largest contributors to his 2013 campaign, hailed McAuliffe's move as strong climate leadership in the face of a March executive order by President Donald Trump aimed at unwinding the Clean Power Plan, former President Barack Obama's signature regulation aimed at cutting emissions from power plants. Trump's order was seen as a death blow for the plan, which has been stalled in federal courts.

"This bold action demonstrates that when Washington fumbles and falls, with the right leadership, the states can lead," said attorney Will Cleveland of the Southern Environmental Law Center in Charlottesville. "Hopefully Gov. McAuliffe's actions today will inspire policymakers in other states to follow a similar course."

The Virginia Conservation Network, a consortium of more than 100 environmental groups that includes the law center as well as the Virginia League of Conservation Voters, the Natural Resources Defense Council, the Virginia Chapter of the Sierra Club and Appalachian Voices, called McAuliffe's directive "the largest step taken in the United States to tackle climate change since President Trump took office."

"Climate change is one of the most pressing issues of our time, especially when it comes to its devastating impacts on Virginia's most vulnerable communities," said Mary Rafferty, the network's executive director. "It is imperative that every level of government steps up to be a part of the solution."

The Republican Party of Virginia, however, was less impressed.

"Governor McAuliffe's executive order is the worst kind of virtue signaling," spokesman David D'Onofrio said. He criticized Obama's Clean Power Plan as an expensive and ineffectual measure that he said would have reduced global temperatures by .015 degrees while increasing electricity costs by billions.

"If reducing emissions for the entire country gets .015 degrees, how much less would a Virginia-only plan do? D'Onofrio said. "Meanwhile the free market has led to significant year-over-year reduction in CO2 emissions in the U.S. Terry McAuliffe's decision to ''resist' common-sense environmental policy will drive up prices for consumers, cost Virginians jobs and make it even more difficult to grow our economy."

Environmentalists argued that the final Clean Power Plan rule was too soft on Virginia and that opponents greatly overstated the cost of compliance. Dominion itself filed a legal brief in support of the plan, saying that "effects on power plants and customers can be successfully managed" provided that the rule allows market-based compliance measures, such as emissions trading, and allowed states to create flexible timelines.

"The rule is compatible with long-term industry trends influenced by market conditions and prior environmental regulations," the company wrote.

"They're going to have to get cracking to get that thing done," he said. "It will be a significant rulemaking and it is no question going to be challenged at every opportunity."

And though Virginia Attorney General Mark Herring issued an opinion last week that the air board can regulate carbon under its existing authority, Martin predicts that the issue will surface again.

"The question will be does the board on its own have the ability to promulgate these regulations or does the General Assembly have to pass legislation to authorize it?" he said. "There's going to be many parties participating in it and it's going to result in litigation. If any regulations get enacted it will be after the governor leaves office."

Virginia House of Delegates Speaker William J. Howell, R-Stafford, who is retiring, said McAuliffe's directive is "a broad assertion of regulatory authority, Washington-esque in both its nature and scope" that ignores the legislative process.

"Policy of this scope and magnitude should be debated and voted on by the people’s representatives, not unelected bureaucrats," he said, predicting hindered economic growth and higher energy prices. "We are carefully reviewing today's announcement and will take every action necessary to ensure that the voices of Virginia's citizens are heard and that major policy changes are adopted through the legislative process.”

The working group's report, dated May 12, says climate change and associated rise in sea level, which could increase by 5 feet in Virginia by the end of the century, pose "potentially devastating risk" to the state.

Virginia has seen a 33 percent increase in heavy rainstorms and snowstorms in the past 60 years and an 11 percent increase in precipitation from the largest storms, the report says, citing data from the Georgetown Climate Center and Old Dominion University's Mitigation and Adaption Research Institute. Climate change poses threats to water supplies, agriculture, property and human health in the form of asthma and cardiovascular disease and increasing numbers of disease-spreading insects like ticks and mosquitoes.

"In the last year alone, the number of solar jobs in Virginia has increased by 65 percent, from 1,963 to 3,236," the report says. "Virginia's solar job market is the ninth-fastest-growing solar jobs market in the nation. The commonwealth is already home to over 75,000 energy efficiency workers. Clean-energy business revenue in Virginia has increased from $300 million in 2014 to $1.5 billion in 2016, a five-fold increase."

The group recommended that the state develop regulations that include a "trading-ready carbon-emissions reduction program for fossil-fuel fired electric generating facilities that will enable participation in a broader, established multi-state carbon market."

Some state lawmakers, including Del. Ron Villanueva, R-Virginia Beach, have unsuccessfully pushed legislation that would bring Virginia into the Regional Greenhouse Gas Initiative, a cooperative effort between nine northeastern and mid-Atlantic states that sets regional yearly caps for carbon emissions, regulates emissions from fossil-fuel power plants above 25 megawatts and auctions off those carbon-dioxide "allowances." The proceeds are invested in programs that improve energy efficiency and advance renewable energy technology.

McAuliffe's working group also recommended updating state building codes to reflect current technology and standards and convening an Environmental Justice Advisory Council "to ensure fair treatment and meaningful involvement by all people with respect to policy decisions that impact the environment and health of local communities," among other findings.