The country was struck by an 8.2-magnitude quake, the strongest in decades, killing at least 30 people and leveling areas in some southern states.By CAMILLA SCHICK on Publish Date September 8, 2017. Photo by Luis Alberto Cruz/Associated Press. Watch in Times Video »

U.S. Geological Survey map of Mexico earthquake epicenter (Sept. 8, 2017)
MEXICO CITY — The most powerful earthquake to hit Mexico in 100 years struck off the nation’s Pacific Coast late Thursday, rattling millions of residents in Mexico City with its violent tremors, killing at least 32 people and leveling some areas in the southern part of the country, closer to the quake’s epicenter...

About 50 million people across Mexico felt the earthquake, which had a magnitude of 8.2, the government said. In the capital, the force of the temblor sent residents of the megacity fleeing into the streets at midnight, shaken by alarms blaring over loudspeakers and a full minute of tremors. Windows broke, walls collapsed, and the city seemed to convulse in terrifying waves; the quake even rocked the city’s Angel of Independence monument.

While Mexico City seemed to have been spared extensive damage to infrastructure, according to the government’s preliminary assessment, the effects in the southern states of Chiapas and Oaxaca were probably more severe. The tally of damage — and death — probably will be difficult to assess initially, given that many areas are remote.

Alejandro Murat, the governor of Oaxaca, told the Televisa network that at least 23 people had died in the state, and local officials said residents were buried under the rubble of buildings.

Luis Manuel García Moreno, the secretary of civil defense for the state of Chiapas, said the toll there had risen to seven, and two children died in the state of Tabasco, one when a wall collapsed, the other after a respirator lost power in a hospital.

The effects were also felt in Guatemala, where at least one person died and homes along the border with Mexico were leveled. 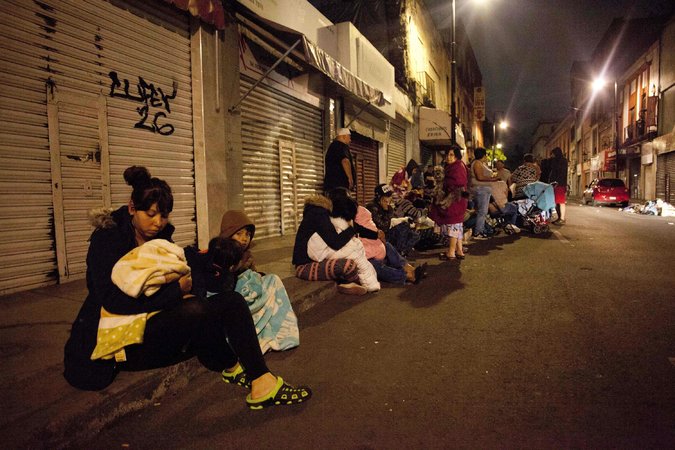 Still, the resounding feeling in the country was one, at least initially, of relief that the damage was not more widespread, given the nation’s vulnerability to earthquakes and the capital’s extreme density.

“We are assessing the damage, which will probably take hours, if not days,” said President Enrique Peña Nieto, who addressed the nation just two hours after the quake. “But the population is safe over all. There should not be a major sense of panic.”

Mexico is situated near several boundaries where portions of the earth’s crust collide. The quake on Thursday was more powerful than the one that killed nearly 10,000 people in 1985.

While the quake on Thursday struck nearly 450 miles from the capital and off the coast of Chiapas State, the one in 1985 was much closer to the city — so the shaking, coupled with Mexico City being on an ancient lake bed, proved much more deadly.

After the 1985 disaster, construction codes were reviewed and stiffened. Today, Mexico’s construction laws are considered as strict as those in the United States or Japan.

After the quake hit, people in Mexico City streamed out of their homes in the dark, wearing nightclothes, standing amid apartment buildings, cafes and bars in upscale neighborhoods and dense warrens of the city’s working-class communities. In the Condesa area, neighbors watched in awe as power lines swayed alongside trees and buildings. In several neighborhoods, the power went out, though it was restored within an hour, at least in the wealthier parts of the capital.

For a city used to earthquakes, Thursday’s quake left a lasting impression on residents, for both its force and duration.

“The scariest part of it all is that if you are an adult, and you’ve lived in this city your adult life, you remember 1985 very vividly,” said Alberto Briseño, a 58-year-old bar manager in Condesa. “This felt as strong and as bad, but from what I see, we’ve been spared from major tragedy.”

“Now we will do what us Mexicans do so well: take the bitter taste of this night and move on,” he added.

The earthquake appeared to hit Juchitán, a city of about 100,000 people on the Pacific Coast of Oaxaca state, the hardest.

The regional hospital, a church dedicated to the city’s patron saint, San Vicente Ferrer, and half of the city’s nineteenth-century city hall collapsed, said Juan Antonio García, the director of a local news website, Cortamortaja. Hospital staff managed to evacuate the patients in time and treated them by the light of their cellphones through the night in an empty lot, he said.

Juchitán’s city hall was a handsome two-story building, famous for its 30 arches occupying the entire block of the city’s central square. But as the earth shook just before midnight, half of the structure was reduced to rubble.

“Countless houses have collapsed,” Mr. García said, adding that it was too early to say how extensive the damage was.

In a video posted on the Facebook page of a local television station, Pamela Terán, who introduced herself as a city councilor, begged the state and federal authorities for help.

“Please, we urgently need as much help as you can send,” she said. “We need hands and manpower to try and dig out the people that we know are buried under the rubble.”

The quake occurred near the Middle America Trench, a zone in the eastern Pacific where one slab of the earth’s crust, called the Cocos Plate, is sliding under another, the North American, in a process called subduction. 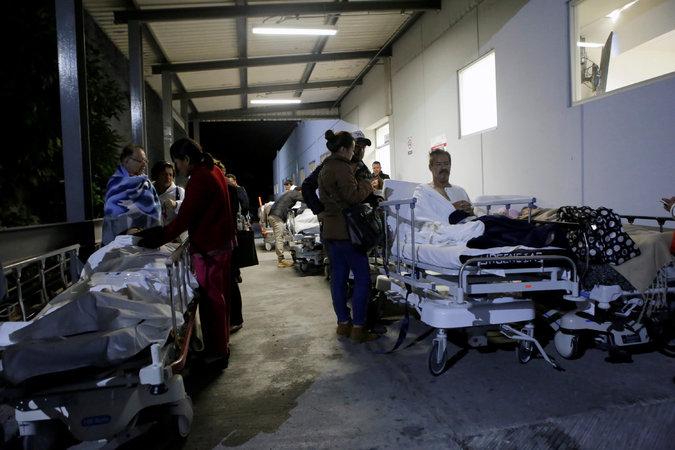 Patients in a clinic in Puebla, Mexico, were taken outside after the quake. Credit Imelda Medina/Reuters

The movement is very slow — about three inches a year — and over time stress builds because of friction between the slabs. At some point, the strain becomes so great that the rock breaks and slips along a fault. This releases vast amounts of energy and, if the slip occurs under the ocean, can move a lot of water suddenly, causing a tsunami.

Subduction zones ring the Pacific Ocean and are also found in other regions. They are responsible for the world’s largest earthquakes and most devastating tsunamis. The magnitude 9 earthquake off Japan in 2011 that led to the Fukushima nuclear disaster and the magnitude 9.1 quake in Indonesia in 2004 that spawned tsunamis that killed a quarter of a million people around the Indian Ocean are recent examples.

Those quakes each released about 30 times as much energy as the one in Mexico.

Mexico’s government issued a tsunami warning off the coast of Oaxaca and Chiapas after Thursday’s quake, but neither state appeared to have been adversely affected by waves. The Pacific Tsunami Warning Center said the largest wave recorded on Mexico’s Pacific Coast measured less than four feet.

In his address, Mr. Peña Nieto said that aftershocks were of greater concern than the waves generated by the earthquake, which he said was the strongest to hit the country in a century.

Rudy Gomez, 28, who lives in the Condesa neighborhood of Mexico City, said that he spoke to relatives in Chiapas by phone after the quake and that they were all fine. They were worried, however, about the aftershocks.

“After the earthquake, there were three more,” he said of the aftershocks in Chiapas. “They are just waiting to see if there is another one to come, but right now they are O.K.”

In Guatemala, the military was out Friday morning assessing the damage, found mainly in the western part of the country.

In Huehuetenango, bricks and glass were strewn on the ground as walls in the city collapsed. Quetzaltenango, Guatemala’s second-largest city, which was beginning to recover from a tremor in June, suffered more damage to its historic center.