MIAMI JUST HAD ITS HOTTEST MONTH ON RECORD... Editor's note: The final average temperature for July 2017 in Miami, released Tuesday, was 0.2°F above the previous record hot month of June 2010.

Summers in Miami are always hot and humid, but this summer has been one for the record books. July was the hottest month ever recorded for the city, with temperature archives going back to 1896, and capped off what has been the hottest year-to-date...

Every day except July 31 saw a high temperature at or above 90°F (32°C), and nighttime low temperatures have also been exceptionally warm. Miami, like other cities in the U.S., has seen more such days over the past few decades, thanks in part to the rise in global temperatures fueled by ever-increasing levels of heat-trapping greenhouse gases in the atmosphere. 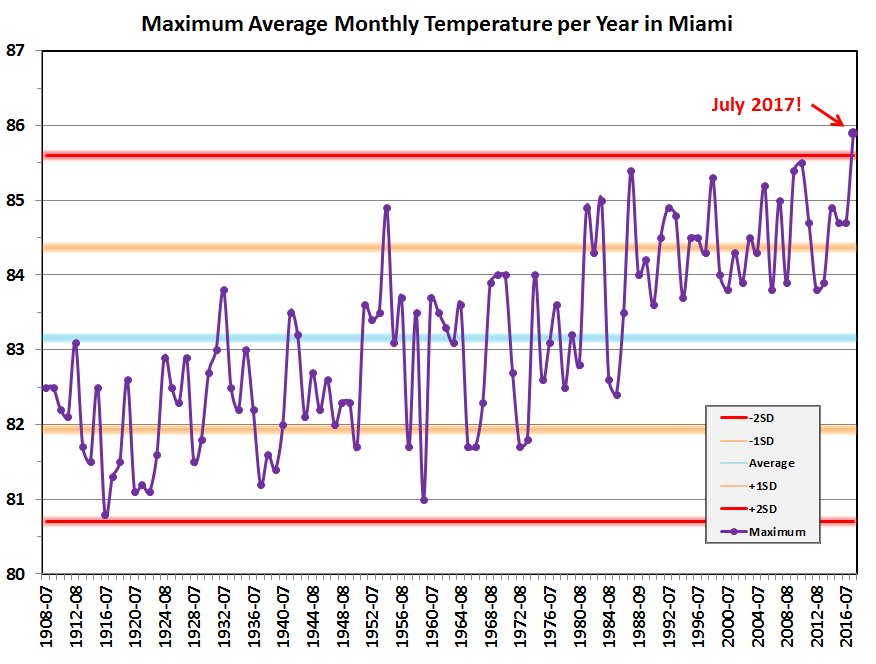 July 2017 will be hottest month in #Miami history, and is a huge outlier. Chart shows hottest month each year (as of 29Jul). #climate #flwx

The trends show that global warming has a significant impact even in already warm places like South Florida.

It’s not surprising that a summer month would be the hottest, but it’s still noteworthy that July “beat all the other summer months” in records going back more than 100 years, Brian McNoldy a meteorologist and hurricane researcher at the University of Miami, said.

The record-hot July was fueled by both exceptional daytime highs and sweltering nighttime lows.

Through Sunday, Miami had 41 straight days with highs of 90°F or higher, the second-longest such streak on record (the longest was 44 days). Cloudy weather courtesy of Tropical Storm Emily was likely to keep Monday’s temperature well below 90. 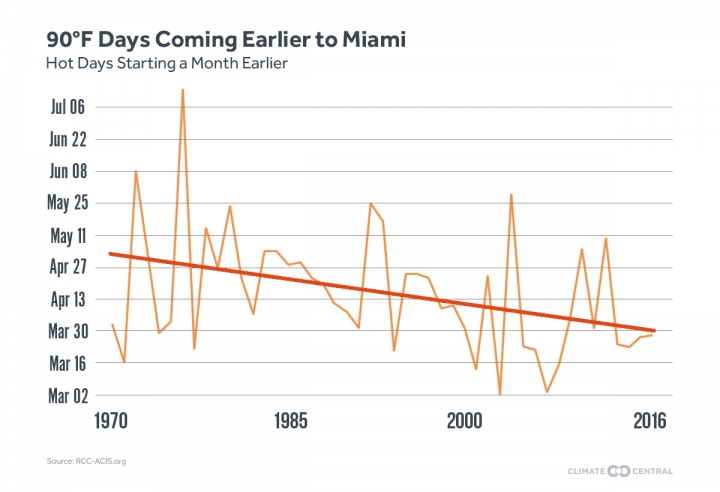 Temperatures got so high last week that, combined with the usual high humidity in the area, they sent the heat index above 105°F (41°C)), triggering rare heat advisories.

The summer nights have offered little respite from the heat of the day, with 34 days so far this year recording a low temperature at or above 80°F (27°C), a record for this point in the year.

This July had as many days at or above that mark as the previous five Julys combined, Miami-based meteorologist Eric Blake tweeted. With plenty of summer left, Miami is likely to beat the annual record for such days, which stands at 45, McNoldy said.

While a ridge of high pressure over the eastern U.S. and a strong onshore flow that has kept clouds at bay have contributed to the sweltering month, the records that Miami has accumulated are more likely thanks to the rise in average temperatures there and around the world. As average temperatures rise because of greenhouse gases, it makes hitting heat extremes that much easier and cold records that much more difficult to set. 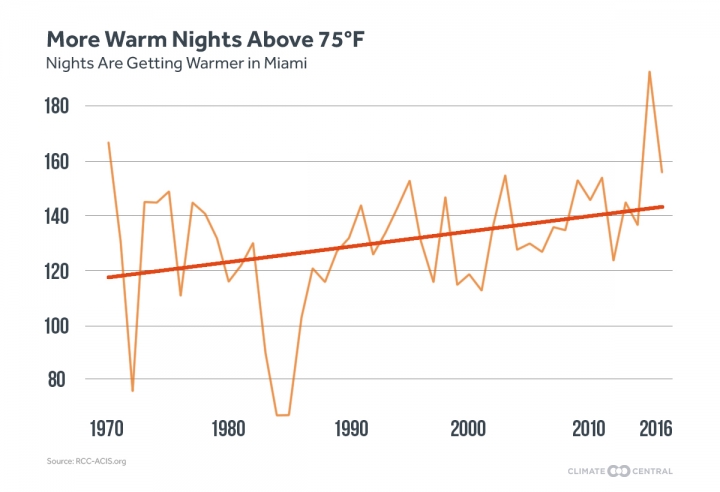 Average summer temperatures in Miami have risen by 2.1°F (1.2°C) since 1970, according to a Climate Central analysis of local temperature records. That rise has translated to the city seeing its first 90°F day of the year a full month earlier than it did four decades ago, as well as about 20 more nights above 75°F (24°C).

Miami has had 11 record highs so far this year, including its hottest temperature outside of summer, when it hit 98°F (37°C) in May, McNoldy wrote in a post for the Washington Post’s Capital Weather Gang blog. 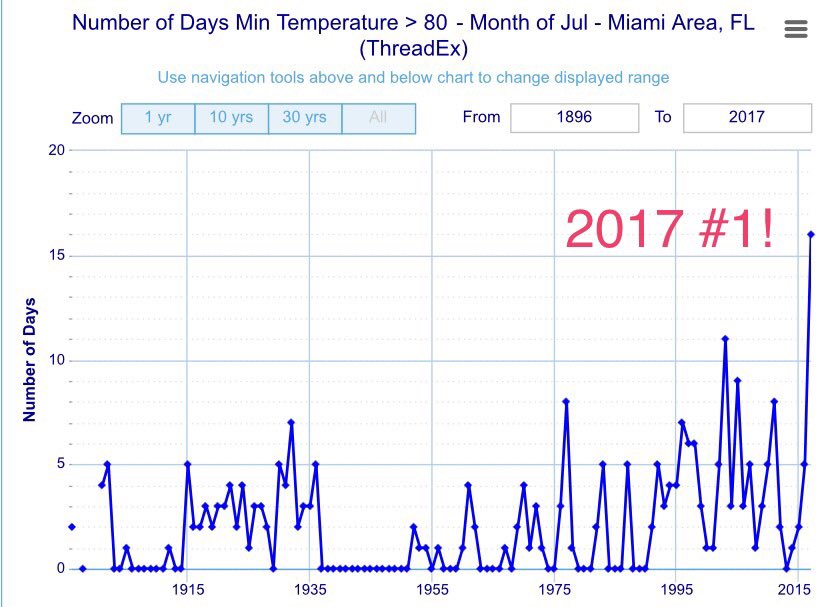 Here's a #SundayMorning #Miami heat fact: This July has had as many days with a low > 80 as the last 5 Julys combined!

A recent study that looked at how the number of days that reach deadly levels of heat and humidity might change around the world with warming saw the biggest increases in the tropics, because it takes less of a boost to exceed those levels in areas like Miami that are already warm.

Such heat has significant public health implications, even in major cities in developed countries, like Miami, where “there are plenty of people here who don’t have A/C in their houses,” McNoldy said.

For the time being, though, cooler weather is prevailing thanks to the tropical storm blanketing the southern half of the peninsula in clouds and rain. But hot summer temperatures will return soon.