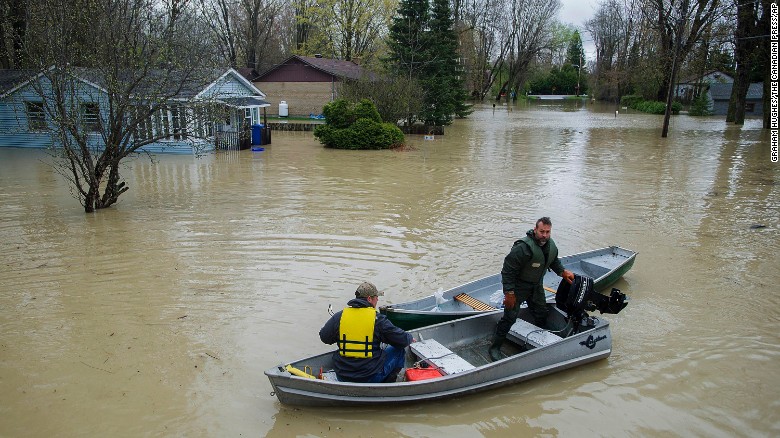 Two men in a boat navigate a flooded street in Rigaud, west of Montreal on Sunday. Rising flood waters threatened dikes and breakwaters and forced residents from their homes in parts of Canada's Quebec province. Credit: CNN

Montreal's mayor has declared a state of emergency as rising flood waters threaten dikes and breakwaters and force residents from their homes in parts of Canada's Quebec province...

About 1,200 military personnel have been deployed to support emergency services responding to the flooding. 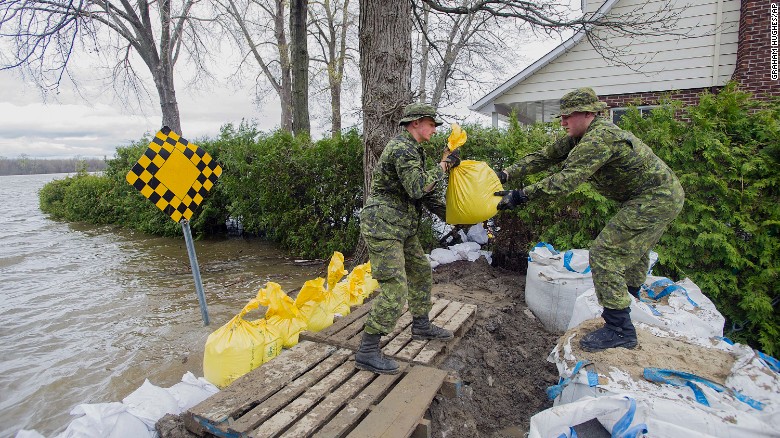 Canadian troops place sandbags in the Montreal borough of Pierrefonds.
In a statement on Sunday announcing the 48-hour state of emergency, the city of Montreal said forecasts suggested that the situation would not be short-lived.
Environment Canada was warning that water levels in the Rivière des Prairies were expected to rise by 20 centimeters overnight, weakening dikes, breakwaters and dams set up in key areas to prevent water infiltration, the statement said.
At least 180 homes had been evacuated, the city said, and the Red Cross was providing shelter to those residents forced out. 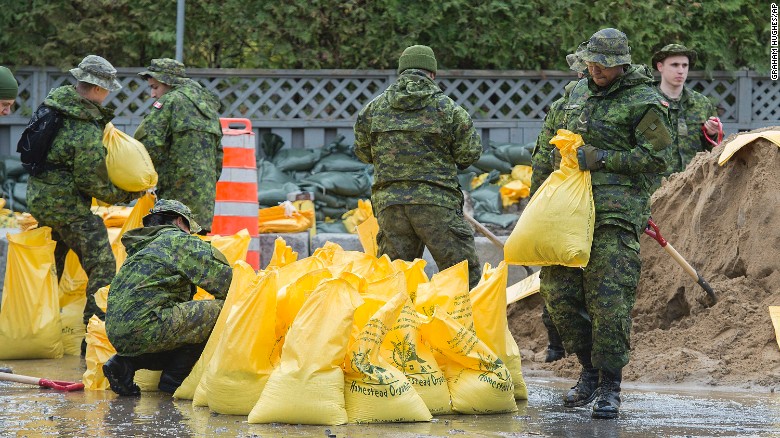 Canadian troops fill sandbags in the Montreal borough of Pierrefonds, Sunday.
"Montreal is in the middle of an exceptional and historic circumstance owing to an unprecedented rise in water levels causing flooding. The safety of residents remains our biggest priority, and that's why I declared the state of emergency," Montreal Mayor Denis Coderre said.
"I ask all residents affected by the flooding to collaborate by following the recommendations and abiding by the decisions made now and as we move forward. I strongly urge residents of Île Mercier and other residents whose safety cannot be ensured by emergency services to comply with the evacuation order," he said.
The state of emergency applies to the areas of Ahuntsic--Cartierville; Île-Bizard--Sainte-Geneviève; Pierrefonds-Roxboro; Sainte-Anne-de-Bellevue; and Senneville.

A state of emergency was also declared in the city of Laval, north of Montreal, by Mayor Marc Demers.
"We applaud the concerted efforts of everyone helping out on site who are sparing no energy to come to the assistance of the flood victims; however, considering all possible impacts on Laval residents' safety and their belongings, we are declaring a local state of emergency today in order to make sure that no resources will be neglected to provide all help requested," Mayor Demers said in a statement.
Emergency workers went door-to-door Sunday advising residents of Laval's Île-Verte and Île-Roussin to evacuate. 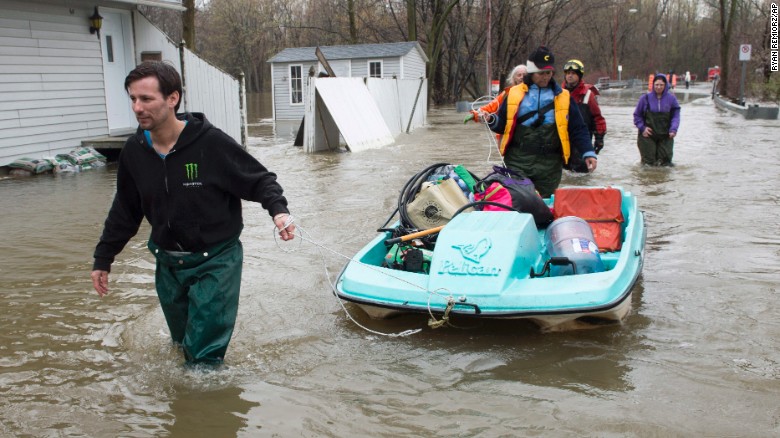 Residents transport supplies by boat in the Ile-Mercier district of Ile-Bizard, Quebec, Friday.
CNN Meteorologist Michael Guy said rain was forecast to continue falling over eastern Canada for the next five days.
"They could see upwards of another 25 to 50 mm of rain (1 to 2 inches) with localized heavier amounts possible up to 75 mm (3 inches). So unfortunately -- not much relief in sight," Guy said.
He said some radar estimates showed that the region had already had 250 to 350 mm of rain (10 to 14 inches) over the past week.
In a statement posted on his Facebook page Sunday, Mayor Coderre paid tribute to those working together to protect Montreal.
"Thank you to all our services and our personnel who are dedicated body and souls for our citizens. Thank you to our firefighters, blue collar workers, white collar workers, police officers, district directors, those responsible for water supplies, etc.. for your magnificent contribution, Solidarity and Professionalism. Thank you also to our Armed Forces for their presence and expertise," he wrote in French.
Coderre said the situation was under control and the emergency response would be adapted to meet any changes in circumstance.
An additional 800 troops joined more than 400 personnel in the Saint-Jean sur Richelieu, Shawinigan, Laval and Gatineau areas Sunday, according to a statement from the Canadian Armed Forces. Aviation assets, engineer assets, and 12 boats from the Naval Reserve, were also involved in the emergency response, it said.