MORE THAN 200 PROTESTERS ARRESTED IN PARIS CLASH BEFORE CLIMATE TALKS... 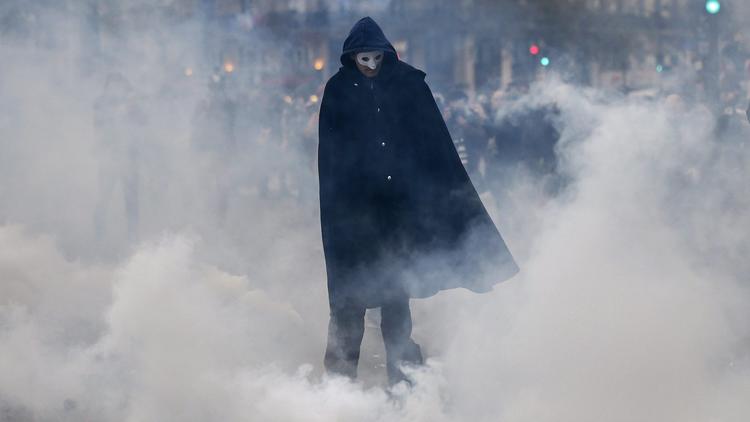 A masked protester walks through smoke Sunday during a clash with French riot police on the Place de la Republique before the opening of an international climate conference in Paris.(Ian Langsdon / European Pressphoto Agency)

A major march through central Paris was called off because of the state of emergency declared after the deadly shooting and bombing attacks two weeks ago.

Instead, thousands of people formed a human chain along the intended route and lined up shoes in the square to represent those who could not march.

Most dispersed peacefully around midday. But others appeared intent on defying the restrictions, trying to force their way through police lines, according to officials. Some threw shoes and bottles at police along with candles that had been left in the square in memory of the 130 people killed in the Nov. 13 attacks.

Police in riot gear fired tear gas at the protesters and moved in to take control of the square. Interior Minister Bernard Cazeneuve said more than 200 people were arrested at the square and 174 of them placed into custody. He blamed the violence on a "small minority" who were bent on making trouble. 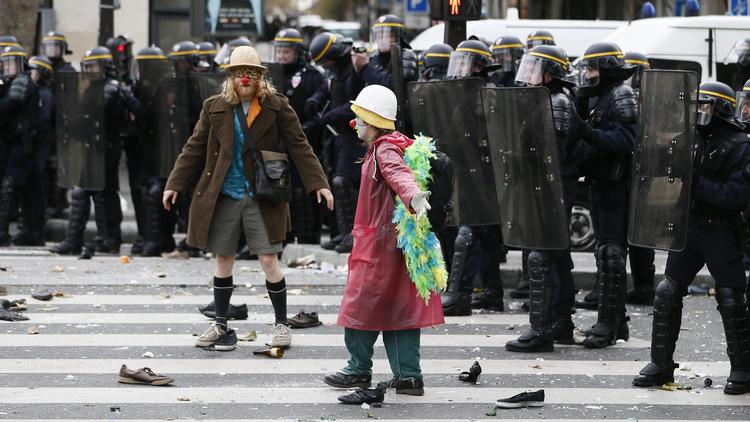 Protesters dressed as clowns appeal to other protesters to stop throwing projectiles at riot police Sunday at the Place de la Republique in Paris ahead of international climate talks. Activists placed shoes in the square as a symbolic gesture after a major march was called off because of the state of emergency still in effect after the terrorist attacks two weeks ago.(Ian Langsdon / European Pressphoto Agency)

There were no immediate reports of serious injuries on either side.

French President Francois Hollande called the violence "scandalous" and accused protesters of dishonoring the memory of those who died Nov. 13.

Brendan Cummings, senior counsel for the Center for Biological Diversity and a resident of Joshua Tree, Calif., was in Paris and said he witnessed the clash.

“The overwhelming majority of those assembled were nonviolent and peaceful," he said in a telephone interview. "But many wanted to march rather than stand still. For them, climate change is the most urgent crisis facing the world, and for the government to ban all protests was highly problematic."

Cummings said police appeared to be using nonlethal, so-called flash-bang grenades, which could have rattled Parisians in nearby neighborhoods who are on edge after the terrorist attacks.

The United Nations climate conference has presented a major security challenge for French authorities. Tens of thousands of people, including nearly 150 heads of state and government, including President Obama, are expected to take part in the talks that officially open Monday.

Thousands of armed police and soldiers have been deployed and miles of road blocked off so official convoys can move quickly between city airports and the conference venue at Le Bourget, on the northern edge of Paris.

Leaders of a number of environmental groups have said that they understand the need for stepped-up security measures in the wake of the attacks. But some have questioned why their demonstrations are banned when Christmas markets and other gatherings are allowed to proceed.

“All this makes us think that the state of emergency is being used as a way to shut us up,” said Juliette Rousseau, who coordinates a coalition of environmental and social justice groups known as Climat 21.