NASA PHOTOS CAPTURE A STRANGE NEW CRACK IN A MASSIVE GREENLAND GLACIER AND WE MIGHT BE DOOMED...

A mysterious crack has been spreading across a giant Greenland glacier, and it's raising concerns that part of the floating ice shelf could splinter off into the ocean.

That could be bad...

Scientists with the NASA field campaign Operation IceBridge recently captured the first photographs of the growing rift while flying over Petermann Glacier, a structure that connects the Greenland ice sheet to the Arctic Ocean.

The new chasm appears in the center of the glacier's floating ice shelf — the tongue of ice that extends into the water from the grounded glacier on land.

In the photos, the crack appears relatively close to a larger rift spreading toward the shelf's center. Should the two intersect, part of the ice shelf in northwest Greenland could potentially break off.

There may be a savior for the shelf. A "medial flowline" in the ice could have a "stagnating effect" on the newer rift, helping to slow or halt its advance toward the older chasm, scientists with Operation IceBridge said on Facebook.

Stef Lhermitte, a professor at Delft University of Technology in the Netherlands, first alerted the NASA team to the crack's coordinates after spotting it in satellite images, Washington Post reported.

Polar-orbiting satellites showed the chasm for the first time in July 2016, and "it has been growing since then," Lhermitte said on Twitter. 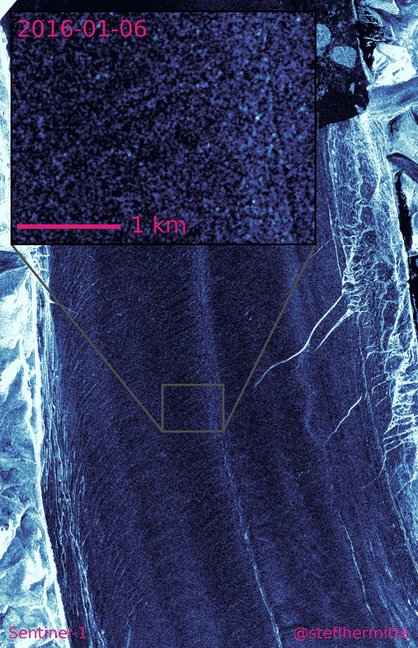 While scientists still aren't sure what caused the crack to form, Lhermitte said a possible culprit might be "ocean forcing," a phenomenon that happens when warm ocean waters melt the ice from underneath.

Ocean forcing might also be responsible for creating cracks in another part of the world. Researchers believe it caused deep subsurface cracks to form in Antarctica's Pine Island Glacier, they said in recent study. There a 20-mile-long rift eventually split the ice from the inside out and cleaved off a 225-square-mile iceberg in July 2015.

Many of the glaciers in Greenland and Antarctica that end in floating ice shelves have been shrinking due to warming ocean and air temperatures.

When ice shelves break off into icebergs it doesn't directly increase sea levels, because the ice is already floating in the ocean, like an ice cube in a glass.

However, because the ice shelves act like doorstops to the land-based ice behind them, if the shelves disappear, the glaciers can start moving into the sea. This would add new water to the ocean and therefore raise sea levels.

In the case of Antarctica's Pine Island Glacier, researchers said that warming waters causing cracks to form beneath "provides another mechanism for rapid retreat of these glaciers, adding to the probability that we may see significant collapse of West Antarctica in our lifetimes."

Greenland, Antarctica, the message is our planet is clearly changing.