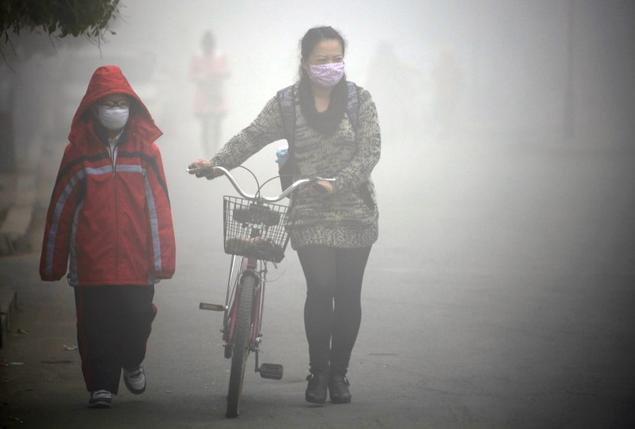 People walk along a street during a smoggy day in Jilin, Jilin province, October 22, 2013. Reuters/Stringer
Many nations are pushing for swift ratification of a Paris agreement to slow climate change and lock it in place for four years before a change in the White House next year that might bring a weakening of Washington's long-term commitment...

More than 130 nations with 60 leaders including French President Francois Hollande are due to sign December's pact at a U.N. ceremony in New York on April 22, the most ever for a U.N. agreement on an opening day, the United Nations said.

Both China and the United States, the world's top emitters accounting together for 38 percent of emissions, have promised to sign then. U.S. Secretary of State John Kerry is expected to attend.

But signing is only a step in a tortuous U.N. process for the deal to enter into force, which requires formal approval by at least 55 nations representing 55 percent of man-made greenhouse gas emissions.

In many countries, that needs a parliamentary vote.

Some experts predict the 55 percent thresholds can be reached this year, before President Barack Obama leaves office in January 2017.

But many developing nations want the Paris agreement to move forward as rapidly as possible on ratification, partly to lock in the United States if Republican candidates Donald Trump or Ted Cruz, who do not think that climate change is man-made, win the U.S. presidency.

Once the Paris accord enters into force, a little-noted Article 28 says any nation wanting to withdraw will first have to wait four years - the length of a U.S. presidential term.

"I would expect non-compliance, but not necessarily a formal withdrawal," under a Republican president, said Oliver Geden, of the German Institute for International and Security Affairs.

And many nations see self-interest in signing up.

"Moving to clean energy is in every country's interest and I am confident that climate action is an historic inevitability," Maldives Environment Minister Thoriq Ibrahim, chair of the Alliance of Small Island States, told Reuters.

All 195 nations in Paris agreed the deal except Nicaragua, which objected that it demanded too little of the rich. Some were reluctant such as OPEC oil producers led by Saudi Arabia.

Still, the agreement could reach 55 percent of emissions with support from just a handful of countries, for instance China, the United States, Russia, India, Japan and Brazil. The European Union, with a 12 percent share, is likely to lag because it first has to share out promised curbs among member states.

Many nations want to avoid a repeat of the U.N.'s previous climate deal, the 1997 Kyoto Protocol, which only entered into force in 2005 after years of disputes between Washington and its main allies.

Kyoto dictated cuts in greenhouse gas emissions only for developed nations, unlike the Paris Agreement which involves both rich and poor but lets all countries set national targets.

Obama says his administration can now join the Paris agreement without getting approval from the Senate.

"A lot has changed" since Kyoto, Christiana Figueres, head of the U.N. Climate Change Secretariat, told Reuters, noting that prices of wind and solar energy have tumbled and scientists are ever more certain that burning fossil fuels causes global warming.

"Much is made by some of the politics in the United States but it seems unthinkable that, whatever political complexion is in the White House ... (they) cannot see the self-evident economic and social benefits" of reducing emissions, she said.

Several vulnerable nations have already ratified the Paris agreement, even before the signing ceremony, led by Fiji, the Marshall Islands, Palau and the Maldives.

"My sense is that it (ratification) will move fairly quickly, possibly this year," said Alden Meyer, of the Union of Concerned Scientists.