NEW CO2 RECORD: IS IT TIME TO GEOENGINEER OUR PLANET? 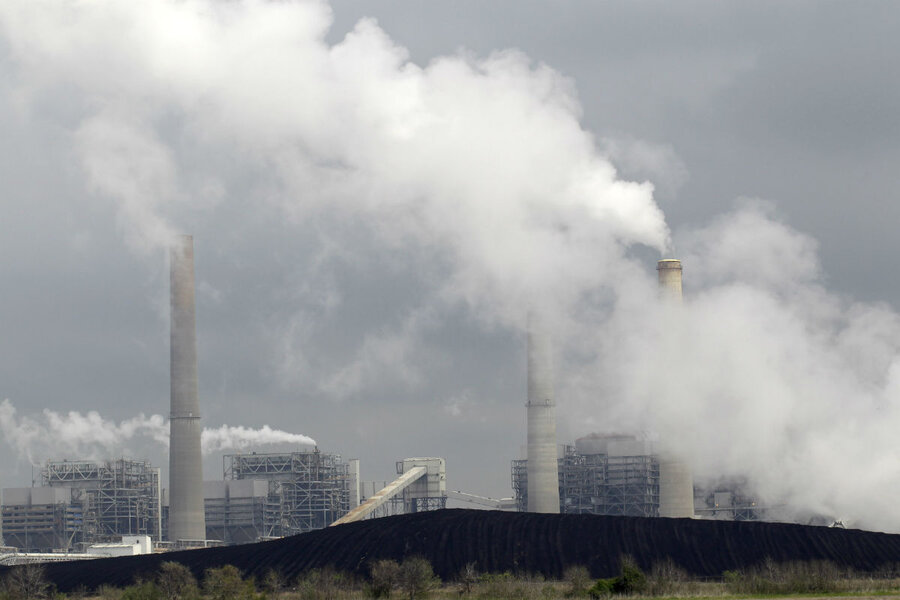 Piles of coal sit at NRG Energy's W.A. Parish Electric Generating Station in Thompsons, Texas. The plant, which operates natural gas and coal-fired units, is one of the largest power plants in the US. If the Earth overheats can it be artificially cooled? David J Philip AP/file.

The atmosphere’s carbon concentration now exceeds 1960 levels by about a third, and rises faster each decade.

The concentration of carbon dioxide rose by 3 parts per million (p.p.m.) for the second year in a row in 2016, bringing the average concentration to a record-setting 405 p.p.m., according to the National Oceanic and Atmospheric Administration (NOAA). With the new administration’s official stance on climate change in flux, many scientists suggest searching for new solutions to mitigate warming, including some controversial methods of so-called climate intervention.

“The rate of CO2 growth over the last decade is 100 to 200 times faster than what the Earth experienced during the transition from the last Ice Age,” said Pieter Tans, lead scientist of NOAA's Global Greenhouse Gas Reference Network, in a press release. “This is a real shock to the atmosphere.”

NOAA’s Mauna Loa Baseline Atmospheric Observatory witnessed the atmosphere’s average concentration of CO2 cross the historic 400 p.p.m. mark in late 2015, an occasion that many hoped would serve as a wake-up call.

“It is a sad milestone. CO2 levels were about 320 p.p.m. when I was born in 1965. It is shocking to realize that they’ve gone up 80 p.p.m. over the course of my lifetime,” said Penn State climatologist Michael Mann.

Pre-industrial concentrations rarely exceeded 280 p.p.m., and some estimates suggest we would need to keep the carbon concentration between 405 and 450 p.p.m. to limit warming to the internationally set target of 2 degrees Celsius (3.6 degrees Fahrenheit). But while that concentration rose by less than one part per million annually in the 1960s, the current annual increase of 3 p.p.m. would put Earth in the danger zone by the early 2030s.

Such dire straits have scientists exploring additional paths to mitigating Earth’s warming that could buy more time for accords like the Paris Agreement to reduce international emissions.

The US Global Change Research Program (USGCRP) published a 119-page report in January, two paragraphs of which were devoted to recommending, for the first time, preliminary research into what it called “climate intervention.” Specifically, it suggested investigating the effects of modifying Earth’s reflectivity and a technology called carbon dioxide removal so that "deliberative climate intervention may someday be one of a portfolio of tools used in managing climate change."

Even supporters of so-called geoengineering are wary of climate interventions because of their poorly understood effects and the risk some may interpret them as a carte blanche to ignore climate change’s root causes.

“Geoengineering is, at best, a backup strategy to buy ourselves time, if we don't move quickly enough and things like the ice melting and methane release are happening in a nonlinear way that we don't expect,” cautioned Bill Gates, who backs geoengineering research, in an interview with Bloomberg. “But it really is like a fire extinguisher that puts the flames out for decades as opposed to a real solution.”

The first approach mentioned in the USGCRP report deals with solar geoengineering, altering the planet to make it reflect more sunlight, akin to exchanging a dark shirt for a light shirt on a hot day. One technique would involve spraying tons of reflective particles into the atmosphere, while more exotic proposals include giant orbiting sunshades.

The method would have effects similar to a volcanic eruption, creating a cooling effect much like the half-degree global temperature drop seen in the three years following the 1991 eruption of Mount Pinatubo in the Phillippines, which sent millions of tons of dust and ash into the stratosphere.

University of Michigan professor of atmospheric science Joyce Penner suggests that such a scheme might be “easy to implement,” but warns against over-reliance. “There is too much we do not know about the climate system, and we should not count on ever-increasing amounts of albedo modification to come to the rescue,” she says in an interview with The Christian Science Monitor.

The reflective particles would fall out of the atmosphere after a year or two, and the temperature change would come roaring back, scientists say.

“Albedo modification can be easily stopped. However, the climate would then respond almost immediately (within a few years) to the increased CO2 whose impact was being masked by the albedo modification,” Dr. Penner warns.

Some scientists favor a less invasive approach with a more lasting effect, such as the USGCRP’s other suggestion: carbon removal. Technology similar to the scrubbers that capture CO2 in power plant smokestacks can extract carbon directly from the atmosphere. If this removal could be scaled up globally, it would effectively be the same as emitting less in the first place, says David Keith, Harvard professor of applied physics and founder of CO2-removal company Carbon Engineering.

“Nature doesn't see a difference between us not emitting a ton and emitting it and then recapturing it,” Dr. Keith tells the Monitor.

His company and competitors like Global Thermostat use honeycomb-shaped grills featuring large internal surface areas coated with a type of liquids called amines that can sponge up CO2 before being regenerated for re-use. The end product is nearly pure, reclaimed CO2 that could be buried or converted into fuel and sold.

In a sense, they perform the same carbon-absorbing job as trees, except they take up less land, can be installed anywhere, and don’t need water or nutrients.

While carbon removal may prove technologically and economically feasible, one problem with using it on a global scale to zero out emissions is what to do with all that carbon after extraction. The University of Manitoba’s Vaclav Smil told the MIT Technology Review that to bury one-fifth of global emissions would require the development of an infrastructure twice as large as the oil industry.

Re-selling the output as fuel, like Carbon Engineering proposes, could generate the necessary industry building profits, but since that fuel would end up being burned, the entire enterprise would be carbon neutral: creating a venue for recycling the carbon released by burning oil, but not realizing the dream of a carbon negative process that could accommodate humanity’s voracious fossil fuel appetite.

“ ‘Science’ won’t fix the climate, but listening to scientists would help. If we want to avoid living on a superheated planet (or a deliberately geoengineered world), the best thing we can do is cut our consumption, buy clean energy, eat less meat,” explained Jeff Goodell, author of "How to Cool the Planet: Geoengineering and the Audacious Quest to Fix Earth’s Climate," in a Slate interview.

But science could help smooth the transition to the carbon-neutral economy necessary to keep the planet from overheating. The temporary patches of solar geoengineering and carbon capture are options we may someday wish to have alongside emissions reductions in the “portfolio of tools” the USGCRP suggests.

“It's not useful to think of carbon removal and solar geoengineering as alternative forms of geoengineering. They are certainly As NOAA’s Mauna Loa observatory records an atmospheric carbon concentration creeping ever higher, more scientists predict that such Plan B’s might have a role to play.

“I think that given the current political climate, we will definitely need additional means to limit temperature increases,” says Penner.

Staff | @walkingthedot
Charlie Wood joined the Monitor's Rapid Response team in January 2017. In previous lives, he taught physics in rural Mozambique with the Peace Corps and English in Japan with the JET program. Originally from Maine, Charlie likes to get into the mountains when he can, and is passionate about all things science and language. He holds a bachelor's degree in physics from Brown University.
source: https://www.csmonitor.com/
original story HERE
Get New Climageddon book: