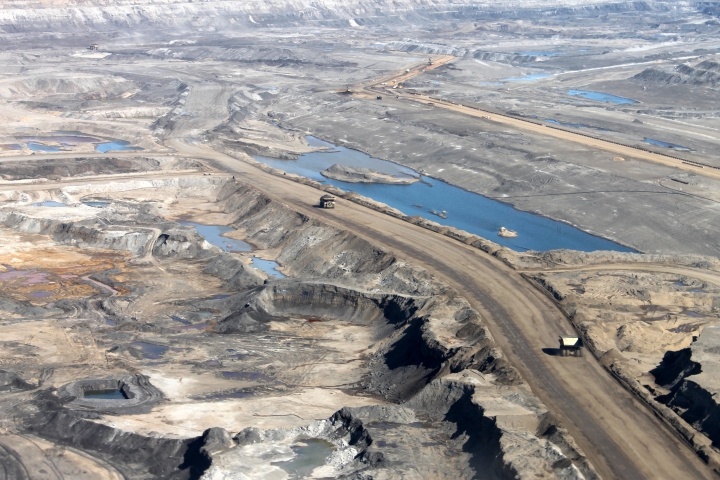 An open pit where tar sands are mined, with a heavy hauler truck that is used to transport oil sand to processing facilities.
Credit: Environment Canada

In one of the first studies of its kind, scientists have found that tar sands production in Canada is one of North America’s largest sources of secondary organic aerosols — air pollutants that affect the climate, cloud formation and public health...

The study, published Wednesday in the journal Nature, showed that the production of tar sands and other heavy oil — thick, highly viscous crude oil that is difficult to produce — are a major source of aerosols, a component of fine particle air pollution, which can affect regional weather patterns and increase the risk of lung and heart disease.

Aerosols from the production of heavy oil is a growing climate and pollution concern because new tar sands developments are on the drawing board in Venezuela, Utah and elsewhere, the study says. Today, heavy oil accounts for 10 percent of global crude oil production worldwide, mostly in Canada, which produced about 1.1 billion barrels of oil in 2014.

“The results indicate that the environmental impacts of Canadian tar sands are much larger than previously recognized,” said Allen Robinson, a mechanical engineering professor at Carnegie Mellon University who is unaffiliated with the study. “What is so novel about this paper is that tar sands were not on anybody’s radar as a major source of aerosol.”

Using aircraft to measure air pollution over the Alberta tar sands region, the researchers found that tar sands production emitted between 55 and 101 metric tonnes of secondary organic aerosols per day. That’s comparable to aerosol pollution measured downwind of major cities such as Mexico City and Paris and greater than the pollution measured near Tokyo and the Northeast U.S.

Aerosols in urban air pollution and from major industries such as the Canadian tar sands are of concern to scientists because they can affect regional climate patterns and have helped to warm the Arctic.

In a separate study published Wednesday, researchers at the RIKEN Advanced Institute for Computational Science in Japan, said aerosols in the Arctic have a “profound” impact on the global climate system. Climate models often underestimate the extent to which aerosols from industrial air pollution — especially those containing black carbon — warm the atmosphere because they assume Arctic air is cleaner than it actually is, the study said.

Black carbon contained within some aerosols can be deposited on Arctic ice sheets and mountain snowpack. The black carbon spread across the ice darkens its color, absorbing more heat and causing the ice to melt more quickly. Less ice and snow on the earth’s surface reduces the earth’s ability to reflect sunlight, increasing surface temperatures. 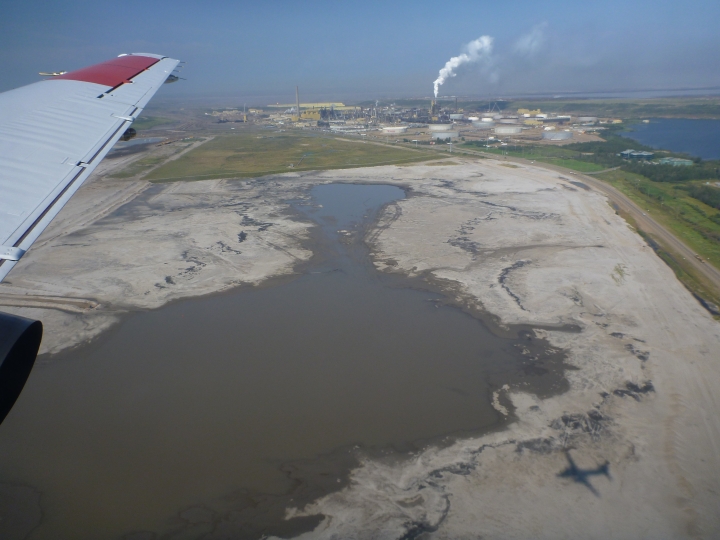 Aerosol pollution also affects the formation of clouds, which are seeded with dust particles in the atmosphere.

Tar sands study co-author Shao-Meng Li, a senior research scientist at Environment and Climate Change Canada, said that in highly-polluted regions, some organic aerosols can prevent clouds from forming. The atmosphere warms when there are fewer clouds to reflect sunlight.

Other aerosols can bring about temporary atmospheric cooling, mainly by seeding clouds that linger in the atmosphere longer than they normally would, or by scattering light. That cooling can have a profound impact on regional climate.

Researchers found in 2014 that aerosols may have been responsible for a cooling trend in the Southeast U.S. during the second half of the 20th century that occurred even as the rest of the globe warmed.

The cooling effect of aerosols can partly offset global warming on a short-term basis, but many are made of organic material that comes from sources that scientists don’t fully understand,  said Joost de Gouw, a research physicist at NOAA’s Earth System Research Laboratory in Boulder, Colo., who is unaffiliated with the studies.

“The results of this study are one piece of the puzzle to understand the overall environmental and climate impacts of the oil sands operations,” he said.

Scientists say that even though the cooling effect from aerosols is real, the biggest climate challenge from the tar sands is their carbon dioxide emissions.

“The real climate issue is the carbon intensity of the process,” Robinson said.

You May Also Like:
Acidifying Waters Put Dungeness Crabs at Risk
Inland Flooding Threat to Increase by 2050
Here’s the Climate Context For the Fort McMurray Wildfire
Florida Reefs Are Dissolving Much Sooner Than Expected