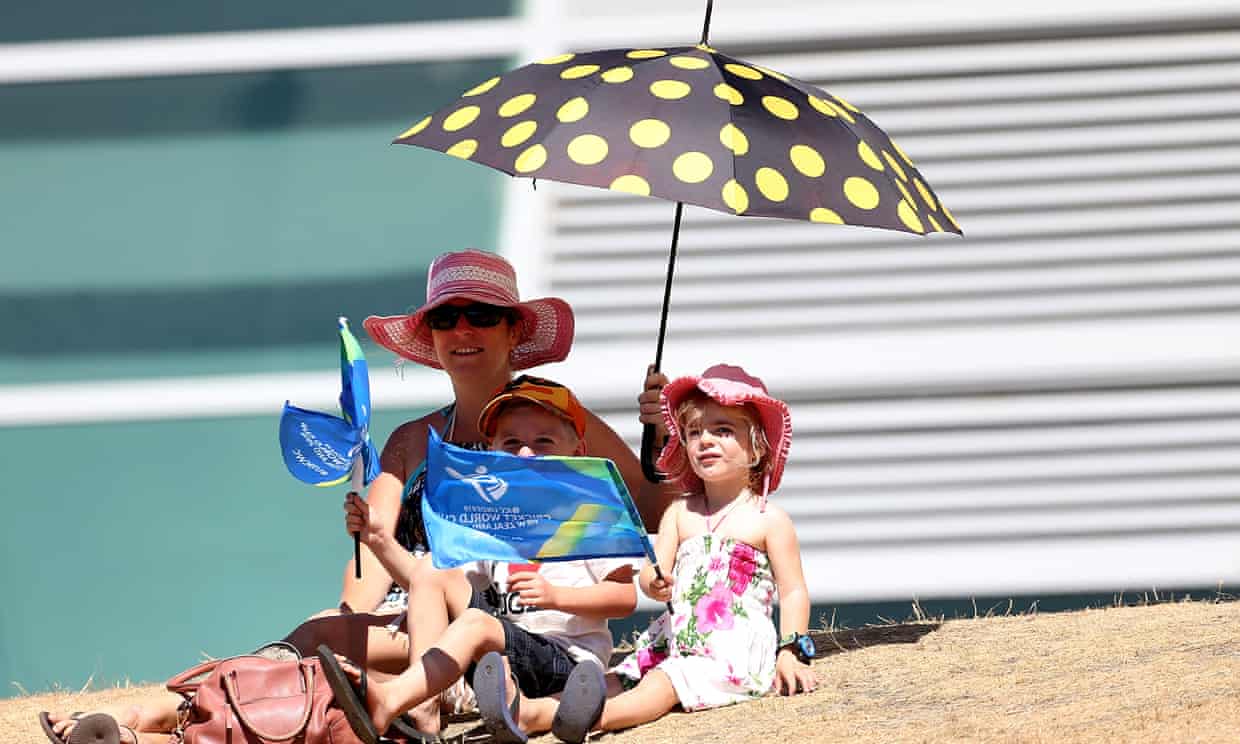 Supporters take shelter from the heat during the under-19 Cricket World Cup match between New Zealand and England in Queenstown. Photograph: Dianne Manson-IDI/Getty Images

A week-long heatwave has floored New Zealand, breaking temperature records across the country and causing a nationwide shortage of fans.

Temperatures have soared above 37C (98.6F) in parts of the South Island, with records broken in Dunedin, Wanaka, Christchurch and many other cities and towns.

Temperatures are expected to peak on Tuesday or Wednesday around the high 30s or 40C mark – highs that are proving particularly challenging for school children as many New Zealand classrooms are equipped with heaters but not air conditioners.

Ben Noll, a meteorologist from the National Institute of Water and Atmospheric Research (Niwa), said unusually warm sea temperatures were the major factor contributing to the heatwave, as the mainland experienced a dramatic rise in land temperatures as soon as the sea rose above average. Niwa has recorded seas of 24C to 26C around Auckland, compared with 18C to 22C at the same time last year.

New Zealand was tracking towards its warmest January on record, Noll said, with high temperatures expected to continue into February.

He added: “In New Zealand its quite rare to get above 30C or even 35C, so New Zealanders are finding this tough because it’s not something they’re accustomed to.

“We have no fans left and air conditioning is much less prevalent than in many other countries.”

The Howard League for Penal Reform told RNZ it had heard reports of prisoners fainting from the extreme heat in unventilated cells and of prison guards struggling to cope in stab-resistant body armour.

The chief coroner, Judge Deborah Marshall, issued a warning for people with health issues to take extra precautions, after a woman died in Christchurch from heatwave conditions. Hospitals around the country have reported an increase in patients – many of them elderly – presenting with heat stress and severe sun exposure.

A nationwide shortage of fans prompted prime minister Jacinda Ardern to improvise, with her partner Clarke Gayford refurbishing a broken fan to keep the couple cool.

Clarke’s fan - it has no front cover and a home made base. I am not complaining.

“Climate change is also likely to result in more droughts, wildfires, floods and infectious disease across the country. These are potentially big challenges for the health sector and I want to make sure it is ready to tackle them.”

In 2017, the oceans were by far the hottest ever recorded | John Abraham. Read more...

The regions of Otago and Southland were expected to declare drought conditions this week after months of little to no rain. Some cattle and sheep farmers have taken to moving stock in the middle of the night to avoid the heat.

Droughts have already been declared in the lower North Island and the South Island’s west coast, with the government offering farmers emergency relief funding.

New Zealand’s current hottest temperature on record was 42.4C/108.3F, recorded in Rangiora in the South Island in February 1973, according to Niwa.

Click here to learn about the most disruptive new book on global warming facts and research. Climageddon, The Global warming Emergency and How to Survive it.