NEXT ‘RENEWABLE ENERGY’: BURNING FORESTS, IF SENATORS GET THEIR WAY... 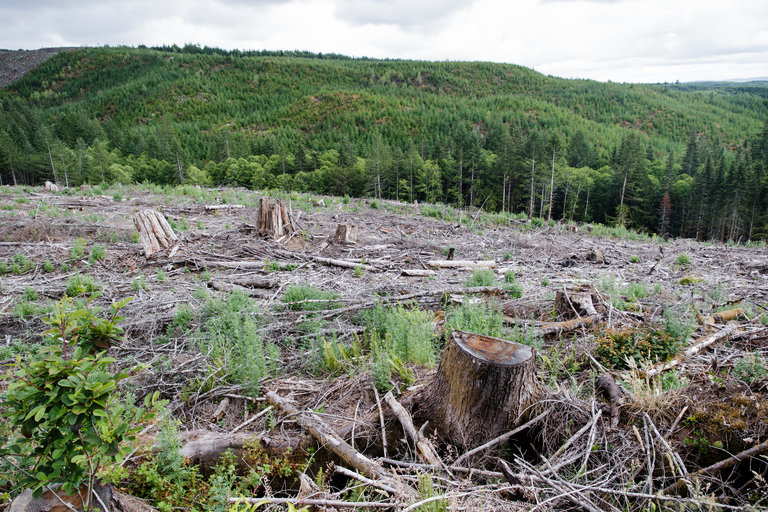 Clear-cutting along Highway 30 in Oregon. A bipartisan group of senators wants the government to assume that burning forests to generate electricity does not add carbon dioxide to the air but is instead “carbon neutral.” Credit Leah Nash for The New York Times

President Obama’s Clean Power Plan — the central plank in his strategy to combat climate change — is in danger...

It’s not just that it is under attack in court, where its legality was challenged last week by a coalition of 28 states and scores of companies and industry groups. Or that fossil fuel interests and Republicans in Congress will keep trying to block it, whatever the courts decide.

The president’s plan to reduce emissions of heat-trapping carbon dioxide from the nation’s power sector could be undone within a matter of weeks by an unlikely bipartisan collection of senators that includes staunch Republican climate change deniers as well as Democrats who support the administration’s strategy.

What’s the problem? They want to force the government to assume that burning forests to generate electricity does not add carbon dioxide to the air but is instead “carbon neutral.” As long as forests that have been cleared are regrown rather than turned into, say, subdivisions, language proposed by the senators argues that the Environmental Protection Agency and the Agriculture Department should recognize the wood and other organic matter pulled from a forest “as a renewable energy source.”

Related: Warning to forest destroyers: this scientist will catch you...

If they succeed, from next year to 2030 they will have added a cumulative total of at least 620 million metric tons of carbon dioxide into the air, according to calculations by the Partnership for Public Integrity, an energy policy analysis group, based on a model used by the government’s Energy Information Administration to assess the impact of the Clean Power Plan.

That amounts to 48 million additional tons of carbon dioxide a year, on average, about three-quarters of what was produced by forest fires in the lower 48 states in 2013. It makes for a big hole in a plan that is supposed to cut annual emissions from the power sector by some 250 million tons between now and 2030.

The proposal not to count carbon from biomass is the work of Maine’s two senators — Susan Collins, a Republican, and Angus King, an independent — who introduced it into the Senate version of the energy bill passed earlier this year. It has broad support, and passed by a unanimous voice vote, according to those speaking for the chairman and ranking member of the Senate’s energy committee.

“The Senate has strongly supported the benefits that biomass utilization can have, including instances in which it is a carbon-neutral source of energy,” they wrote in a statement. “Conversations about the amendment are expected to continue among the bill conferees, the amendment sponsors and other congressional colleagues as the energy bill moves through the conference process.”

While it is hard to handicap its chances, the biomass proposal could become law within weeks. Members of Congress are now working to reconcile the Senate’s bill with the one that passed in the House, which does not include this provision. Even if it fails to make it through, similar language has been attached to appropriations bills for the Interior Department, passed by both chambers and now undergoing reconciliation.

Forest and climate scientists, environmental groups and even doctors are scared. “The cost of getting biomass policy wrong is high,” Sami Yassa of the Natural Resources Defense Council said in a statement. “Burning biomass as a ‘zero-carbon’ fuel to comply could seriously erode the climate gains projected under the Clean Power Plan.”

The strongest proponents of “biomass neutrality” are, unsurprisingly, in heavily forested states where biomass industry groups have substantial sway. But those lawmakers believe they have a legitimate environmental argument: It makes sense not to count carbon dioxide from burning trees when the trees will grow back and recapture all the carbon released when they were burned.

There are a few problems with this thinking. Wood is not very efficient. In fact, burning trees to generate electricity generates more carbon per unit of power than using coal. Power companies would produce fewer emissions if they burned coal and left the forest alone to keep sucking carbon out of the air.

And there is the problem of timing. Sure forests regrow. But it takes many decades for seedlings to grow into trees and recapture all the carbon emitted.

“It’s a double whammy, because you remove an active sink that was sucking carbon out of the air,” said Mary S. Booth, director of the Partnership for Policy Integrity, which opposes the assumption that biomass is carbon neutral. “Under the most conservative assumptions you are worse off for 40 to 50 years.”

The world simply does not have that kind of time.

It is not surprising that power companies would rush to build more biomass generators if they were allowed to consider biomass carbon neutral. Meeting the Energy Information Administration’s estimate of demand for biomass power under this scenario from now to 2030 would require clear-cutting six million to eight million acres of forest, according to the partnership’s analysis.

Biomass proponents say more forests would be planted if timber were considered carbon neutral. Still, that is perhaps too speculative a proposition on which to base such a critical decision.

Indeed, according to the Energy Information Administration’s modeling, one of the core claims of biomass’s champions — that wood would take out coal — is wrong. It would replace solar energy instead: By 2030, installed photovoltaic capacity would be some 20 percent higher in a scenario in which biomass carbon is counted than in one in which it is assumed to be carbon-free. Coal-fired generation, by contrast, does not change.

It is not crazy that members of Congress from states with big forestry industries would try in a big way to draw wood into the nation’s efforts to combat climate change. They must worry, too, about economic development and jobs. And yet creating the fiction that burning forests won’t contribute to climate change would defeat the purpose of climate policy.

The White House is worried about the prospect of turning forests into sources of electricity. Earlier this year it objected to legislation that would stop the Environmental Protection Agency from making its own call on biomass based on its understanding of the science. Still, it is mostly staying out of the fray.

If Mr. Obama thinks climate change is the most important challenge of our time, he might want to take a more muscular approach. According to scientists at the Energy Department’s Lawrence Berkeley National Laboratory, the United States might end up 330 million tons short of the promise it made in Paris last year to cut greenhouse gas emissions in 2025 by 26 to 28 percent compared with 2005.


The Economic Scene column on Wednesday, about a proposal in the Senate that would force the Obama administration to assume that the burning of biomass is “carbon neutral,” misstated several estimates on carbon dioxide emissions, using information from the Partnership for Public Integrity. If the proposal takes effect, it would add at least 620 million metric tons — not 830 million metric tons — of carbon dioxide into the atmosphere. That amounts to 48 million additional tons a year, not 64 million tons, which is equal to about three-quarters of what was produced by forest fires in the continental United States in 2013; it does not equal the amount that forest fires produced that year.