NORTH POLE TO WARM TO NEAR MELTING POINT THIS WEEK: 50 DEGREES ABOVE NORMAL...

It's happening again: The temperature at the North Pole is projected to spike to around the melting point, or 32 degrees Fahrenheit, on Wednesday into Thursday, despite the complete lack of sunshine that far north in December...

Such temperatures would be about 50 degrees above average for this time of year, exceeding the color scale on some weather maps. (Typically, air temperatures at the pole don’t start periodically rising above freezing until at least May.)

SEE ALSO: The Arctic is reeling from its warmest year since at least 1900

In other words, this is not normal. But it's a fitting conclusion to a year of unprecedented global warming milestones in the Arctic.

The reason for what would qualify as a heat wave at the North Pole is a combination of factors, led by a series of storms curving from the Atlantic side of the Arctic toward the Pole, dragging mild air on a moist, southerly air flow with them.

Record low levels of sea ice in the Arctic are also contributing to the record high temperatures, along with a weakened polar vortex that has pulled the most frigid air out of the Arctic and redistributed it into North America and Eurasia.

If this situation seems oddly familiar to you, it's because a nearly identical event occurred in December 2015, causing alarm over a melting North Pole in media outlets.

This year's event is just as anomalous, and it comes as scientists have been raising new alarms about the pace and extent of Arctic climate change. The North Pole warmup also brings questions about whether such extreme warming events, transient as they may be, are occurring more frequently or are becoming more severe.

This warmup is taking place amid the Arctic's warmest year since records began in 1900, according to an international scientific assessment released on Dec. 13. A persistent pattern of anomalously warm conditions (warm for the Arctic anyway) across the central Arctic, including the North Pole, has set up this fall and winter, partly in response to the second-lowest sea ice minimum reached in September.

Experts told Mashable that while the storm systems are the major player in causing this extraordinary warm spell, it is most likely enabled by low sea ice cover.

In the summer and fall, low sea ice cover allows ocean waters to absorb heat from the sun, which is then slowly released into the air in the fall and early winter. Ice-covered areas stay cooler since sea ice reflects most incoming solar radiation.

An analysis published Wednesday by scientists affiliated with the research and journalism group Climate Central found that the record warm November and December in the Arctic would have been "extremely unlikely" in a world without human-caused global warming.

Zack Labe, a PhD student focusing on the Arctic climate at the University of California at Irvine, cited the forecast for Svalbard, Norway, on Dec. 21 as evidence of the poleward push of mild air. The high temperature there is forecast to be 4 degrees Celsius, or 39.2 Fahrenheit. Svalbard's high temperature should be well below freezing at this time of year.

"It’s been a remarkably warm fall there in addition to record low sea ice," Labe said in a Twitter message. He called the "warmth" this fall "just relentless," and a clear result of natural variability combining with low sea ice cover to yield warm ocean and air temperatures that help reinforce each other. 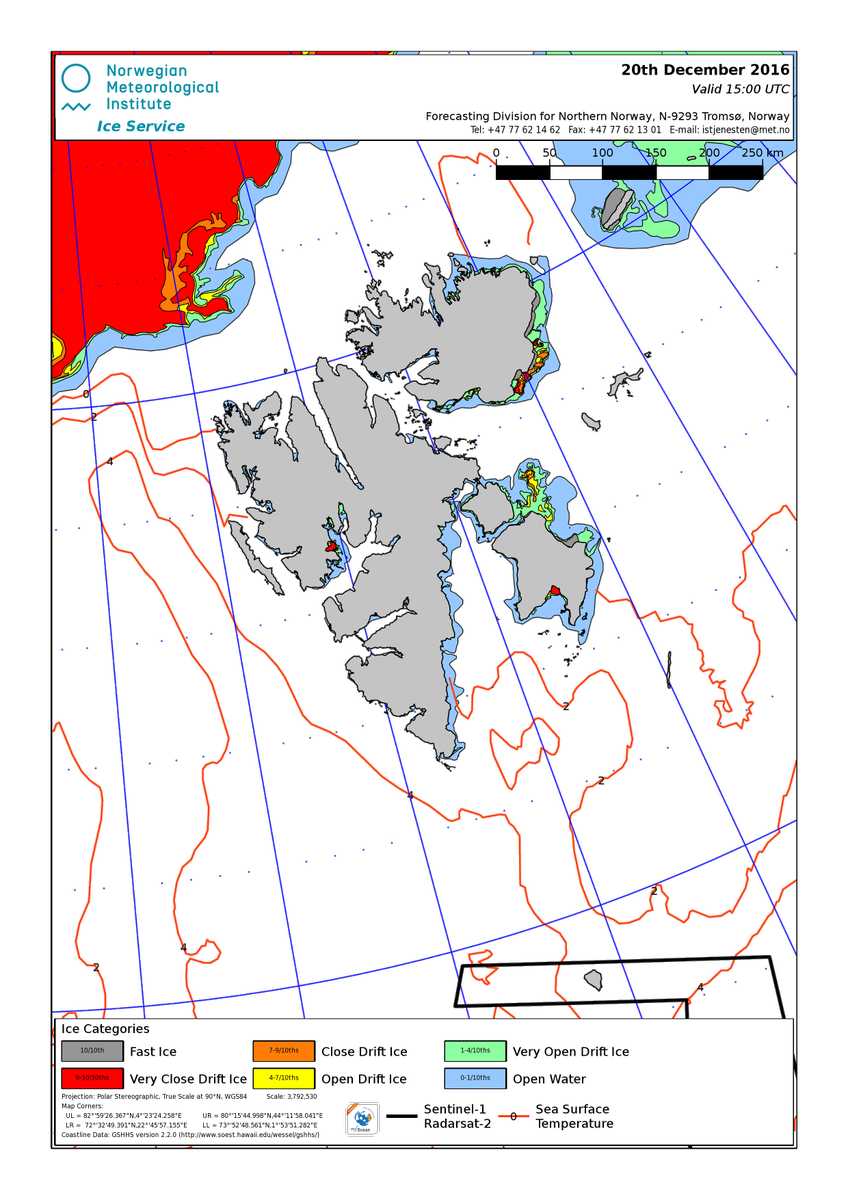 Lowest ice cover since 1967 for December 20 at Svalbard @Istjenesten If area become ice-free year round, it ceases to be #polarbear habitat.

"Despite Arctic sea ice extent (still record low for the date) finally nearing other years, it remains extremely thin and will be more susceptible as we move forward into the melt season for 2017," Labe said.

Kent Moore, a physics professor at the University of Toronto, who published a study in Nature Scientific Reports on Dec. 15 that investigates last year's North Pole warming event, says the long-term context of these North Pole temperature spikes is what is more alarming than each individual one.

The study found that North Pole winter warming events are associated with low pressure systems, or cyclones, near the pole, as well as a polar vortex that is "perturbed," or weakened, which allows for areas of extreme cold to leak out into the midlatitudes. Both of these conditions are present this week.

Moore says that records of such events go back at least to 1959, with a frequency of about once or twice each decade. While there isn't a clear indication that these events are becoming more frequent, Moore told Mashable, the temperature extremes are growing at twice the rate of general Arctic warming.

That's especially noteworthy, since the Arctic is warming faster than any other region on Earth.

"We’re getting to the point where extremes are becoming more extreme.”

Moore says this is consistent with loss of winter sea ice near Norway, which allows a "reservoir" of warm air to move closer to the Pole, where storms can tap into it.

The extreme events may get all the attention, he says, but they aren't an entirely new phenomenon. “They’re not the real story," Moore said. "We’re getting to the point where extremes are becoming more extreme.”

According to Moore, sudden warming events like this one can cause serious problems for Arctic wildlife by causing rain to fall on top of snow, leading to an icy crust that prevents reindeer herds from accessing their food lying beneath the snow.

One rain on snow event, associated with a sudden warming in the Arctic, killed about 61,000 reindeer on the Yamal Peninsula in 2013, demonstrating the ecological consequences of such episodes.

A separate study, published this year in the Journal of Climate this year, found that there is an increase in the number of these events, known as "moist intrusions," crossing 70 degrees north Latitude in December and January. The research found that the number of these events during December and January has nearly doubled since 1990, but it did not explain why this is the case.

Where did the cold air go

So if the North Pole is so unusually warm, where is the frigid air that would normally be keeping the far north in a deep freeze?

Like a freezer door left open for too long, Arctic air has spilled out of the Arctic and taken up residence in the midlatitudes. In the past week, severe cold snaps have hit the Midwest United States, with the most intense cold related to a lobe of the polar vortex situated on top of Siberia.

Temperature anomalies there are as cold as 50 degrees Fahrenheit below average, or more, for this time of year.

This heat wave of sorts is a fitting end to a year of extremes in the Arctic, as if Mother Nature decided to put an exclamation point at the end of a sentence. Based on the trajectory of climate change, this won't be the last or the most significant such event.

As the Climate Central analysis found, by the time global warming reaches 2 degrees Celsius, or 3.6 degrees Fahrenheit, above preindustrial levels, anomalously warm weather events like this one could happen as frequently as every two years.