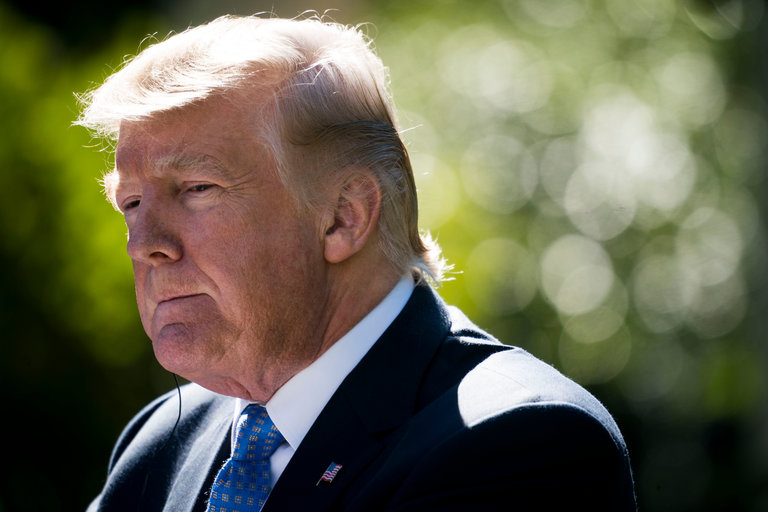 Well, it took almost a year, but we now have the “Trump Doctrine.” It’s very simple. And, as you’d expect, it fits neatly into a tweet. On nearly every major issue, President Trump’s position is: “Obama built it. I broke it. You fix it”...

And that cuts right to the core of what is the most frightening thing about the Trump presidency. It’s not the president’s juvenile tweeting or all the aides who’ve been pushed out of his clown car at high speed or his industrial-strength lying.

It’s Trump’s willingness to unravel so many longstanding policies and institutions at once — from Nafta to Obamacare to the global climate accord to the domestic clean power initiative to the Pacific trade deal to the Iran nuclear deal — without any real preparation either on the day before or for the morning after.

Indeed, Trump has made most of his climate, health, energy and economic decisions without consulting any scientists, without inviting into the White House a broad range of experts, without putting forth his own clear-cut alternatives to the systems he’s unraveling, without having at the ready a team of aides or a political coalition able to implement any alternatives and without a strategic framework that connects all of his dots.

In short, we’re simply supposed to take the president’s word that this or that deal “is the worst deal ever” — backed up by no serious argument or plan about how he will produce a better one.

I’m open to improving any of these accords or institutions. I’m even open to the possibility that by just tipping over all these accords at once, and throwing away his steering wheel, Trump will get people to improve the Iran deal or Obamacare out of sheer panic at the chaos that might ensue if they don’t.

But I am equally open to the possibility that unraveling all of these big systems at once — health, energy, geopolitics — without a clear plan or a capable team will set in motion chain reactions, some of them long term, that Trump has not thought through in the least. Moreover, when you break big systems, which, albeit imperfectly, have stabilized regions, environments or industries for decades, it can be very difficult to restore them.

Question: We’re told by our secretary of state that he’s been engaged in some secret contacts with North Korea, exploring the possibility of a diplomatic solution that might dramatically reduce North Korea’s nuclear arsenal in return for U.S. promises of regime security. If, at the same time, Trump unilaterally pulls out of the deal we’ve already signed with Iran to prevent it from developing nukes — and Trump moves to reimpose sanctions — how does that not send only one message to the North Koreans: No deal with the U.S. is worth the paper it’s written on, so you’d be wise to hold on to all your nukes?

Question: Iran controls tens of thousands of Shiite militiamen in Iraq and Syria who were our tacit allies in defeating ISIS. Tehran also has huge influence over Iraq’s government and over certain regions of Afghanistan as well. Can we stabilize Iraq, Syria and Afghanistan — post-ISIS — and keep our troop presence low and safe, without Iran’s help — and will that help be coming after Trump rips up the nuclear deal? If you think so, please raise your hand.

And since our European allies as well as Russia and China have indicated that they will not follow us in backing out of the Iran deal or reimposing sanctions, Iran would have all the moral high ground and money it needs, and the U.S. would be isolated. Are we going to sanction E.U. banks if they deal with Iran?

Trump came into office vowing to end the trade imbalance with China — a worthy goal. And what was his first move? To tear up the Trans-Pacific Partnership, the trade deal that would have put the U.S. at the helm of a 12-nation trading bloc built around U.S. interests and values, potentially eliminating some 18,000 tariffs on U.S. goods and controlling 40 percent of global G.D.P. And China was not in the group. That’s called leverage.

Trump just ripped up the TPP to “satisfy the base” and is now left begging China for trade crumbs, with little leverage. And because he needs China’s help in dealing with North Korea, he has even less leverage on trade.

Trump pulled the U.S. out of the Paris climate accord and, at the same time, restricted U.S. government funding for birth control both at home and abroad. Question: What is driving so many immigrants and refugees in Africa, the Middle East and Central America to try to get out of their world of disorder and into America and Europe and the world order?

Answer: It is a cocktail of climate change, environmental degradation, population explosions and misgovernance in these countries. So Trump’s policy is to throw away every tool we have to mitigate climate change and population growth and try to build a wall instead, while also trying to bully Mexico’s unpopular president into trade concessions, which could help elect a radical populist in next year’s Mexican election — a successor who would be anti-American — and destabilize its economy as well.

At a time when China has decided to go full-bore into clean tech and electric cars, at a time when all of the tech giants are building data centers that they want powered by clean energy, at a time when solar and wind power are growing increasingly competitive with fossil fuels (and America still has a technological lead in many of these areas), at a time when climate change may be stimulating bigger hurricanes and forest fires that are costing us hundreds of billions of dollars, Trump’s central energy initiative is to reverse Obama’s and bring back coal-fired power.

None of these dots connect. And we will pay for that. “Whiplash” was a great movie. But it’s a terrible organizing principle for our foreign or domestic policy.