OBAMA AND PRESIDENT XI OF CHINA VOW TO SIGN PARIS CLIMATE ACCORD PROMPTLY... 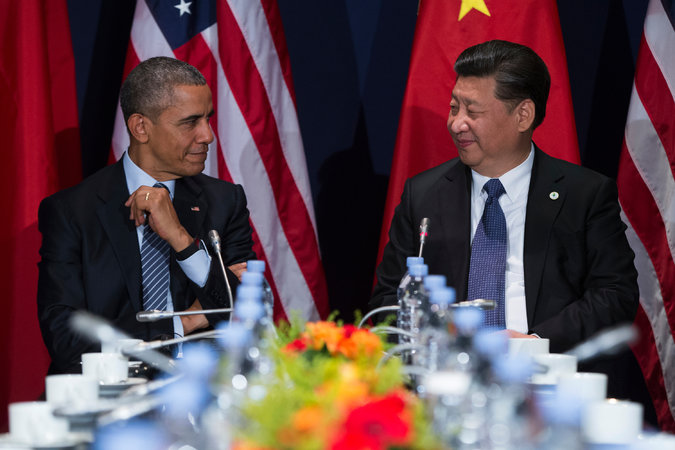 WASHINGTON — President Obama and President Xi Jinping of China said Thursday that they would sign the Paris Agreement on climate change on April 22, the first day the United Nations accord will be open for government signatures...

Officials cast the announcement as a statement of joint resolve by the world’s two largest greenhouse gas polluters, even though there are doubts about whether the United States can meet its obligations under the agreement.

In February, the Supreme Court temporarily blocked an Obama administration regulation to curb greenhouse gas pollution from power plants, the centerpiece of Mr. Obama’s climate change policy and the major way for the administration to meet its targets under the Paris accord.

The two world leaders made the announcement on the sidelines of a nuclear security meeting in Washington.

“Our cooperation and our joint statements were critical in arriving at the Paris agreement, and our two countries have agreed that we will not only sign the agreement on the first day possible, but we’re committing to formally join it as soon as possible this year,” Mr. Obama told reporters at the Walter E. Washington Convention Center, where he was meeting with Mr. Xi at the nuclear gathering.

Mr. Obama, who spoke across a table from Mr. Xi, added, “And we urge other countries to do the same.”

Mr. Xi, speaking through an interpreter, said, “As the two biggest economies, China and the U.S. have a responsibility to work together.”

Highlights from the final draft text of a climate agreement submitted to the delegates in Paris. 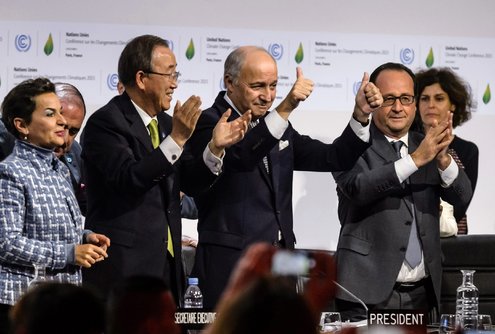 The Paris Agreement, reached in December, is the first global accord to commit nearly every nation to take domestic actions to tackle climate change. To promote the accord, Ban Ki-moon, the United Nations secretary general, planned the signing ceremony for April 22, Earth Day, although world leaders will have a year afterward to sign.

The announcement by Mr. Obama and Mr. Xi is intended to push other countries to sign on, particularly since diplomats say the Supreme Court order has caused some countries to question American climate policy and might cause them to refuse or hesitate to sign the accord.

The Paris Agreement will enter into legal force only when enough countries have signed on: Together they have to be responsible for causing 55 percent of the world’s greenhouse gas emissions.

Because of the Supreme Court stay, the regulation curbing greenhouse gas emissions will not be put in place until legal challenges by 29 states and several business organizations have been resolved, which is unlikely to happen before next year. The regulation would help the United States cut greenhouse gas emissions between 26 percent to 28 percent from 2005 levels by 2025.

Chinese energy experts said China’s pledge to sign the accord was independent of the status of American climate policy.

“The understanding is that China is doing this for its own sake,” said Ranping Song, an expert on China’s climate change policies with the World Resources Institute, a Washington research organization. “It’s good for their environment; it’s good for their economy.”

Mr. Xi’s administration has endorsed an aggressive expansion of renewable energy sources in China. The country’s latest five-year economic plan calls for the country to generate 15 percent of its energy from nonfossil fuel sources by 2020.

Obama and Xi Meet in Washington

President Obama met on Thursday with President Xi Jinping of China to discuss carbon emissions, North Korea and other issues.

By THE ASSOCIATED PRESS on April 1, 2016. Photo by Jacquelyn Martin/Associated Press. Watch in Times Video »

Combined, the United States and China account for about 40 percent of global emissions.

Mr. Ban has invited world leaders to come to New York for the April signing ceremony, which he hopes will represent the largest single joint signing of a major global accord in history.

“The most important thing is how many signatures we get on that day,” said Laurence Tubiana, France’s chief climate change envoy to the United Nations and a key broker of the Paris deal. “We need to show momentum because we know for some countries it may be difficult to sign.”

Todd Stern, the Obama administration’s chief climate change envoy, said that the day after the Supreme Court’s order, many of his counterparts in other countries expressed anxiety.

“I heard, ‘Does this mean you’re pulling out of Paris?’ ” he recalled in a recent interview. “I said: ‘No, no, no, no — under any circumstances, we’re going to stay the course. One way or another, we’re not moving off our target.’ ”

Mr. Stern, who has led climate change negotiations for the Obama administration since 2009, will step down from his post on Friday.

The United States is not the only major polluting country that may have trouble following through on its Paris commitments. President Dilma Rousseff of Brazil committed to an ambitious plan to reduce her country’s emissions 43 percent from 2005 levels by 2030. The climate plan has been a signature of Ms. Rousseff’s administration, but she now faces possible impeachment, which could throw the Brazilian plan into question.

In the United States, enactment of Mr. Obama’s climate change commitments under the Paris deal will ultimately fall to the next president. But that fact also worries some climate diplomats as they watch the 2016 presidential campaign from afar. Although the Democratic front-runner, Hillary Clinton, has pledged to enact and strengthen the Paris Agreement, on the Republican side both Donald J. Trump and Ted Cruz have questioned or denied the science of human-caused climate change. Mr. Trump has forcefully denounced the Paris agreement.

“Everyone who is looking at the election campaign from abroad is puzzled,” Ms. Tubiana said. “Donald Trump is a different type of person. We’re thinking — is this something that could really happen?”