Image: Sue Ogrocki/Associated Press
Miles of pipe for the stalled Canada-to-Texas Keystone XL pipeline are stacked in a field near Ripley, Oklahoma.

The Obama administration rejected the Keystone XL oil pipeline on Friday, handing a major victory to environmentalists after a seven-year review process that gave rise to a grassroots climate activist movement. President Barack Obama announced his decision at a morning news conference in the White House Roosevelt Room, alongside Secretary of State John Kerry and Vice President Joe Biden.

"The State Department has decided the Keystone XL pipeline would not serve the national interests of the United States," Obama said. "I agree with that decision."

The rejection comes only weeks ahead of a crucial climate summit in Paris, where diplomats will work to forge a new global warming agreement to limit greenhouse gas emissions for all countries starting in 2020. The administration has committed to reducing U.S. carbon emissions by 26% to 28% below 2005 levels by 2025, and is pushing for an ambitious climate agreement to be forged.

The decision to reject the pipeline is aimed in part at signaling to the international community the administration's commitment to acting on global warming. Adding to that, Obama confirmed for the first time on Friday that he will be going to Paris to join other world leaders at the summit.

“America is now a global leader when it comes to taking serious action to fight climate change. And frankly, approving this project would have undercut that global leadership," Obama said.

Obama said he spoke with newly-elected Canadian Prime Minister Pierre Trudeau on Friday to inform him of the administration's decision.

The pipeline rejection marks one of the most significant achievements for environmentalists during Obama's term, as groups like 350.org had made it a litmus test of the administration's commitment to solving global warming.

“This is a big win," said 350.org executive director Mary Boeve in a statement. "President Obama’s decision to reject Keystone XL because of its impact on the climate is nothing short of historic — and sets an important precedent that should send shockwaves through the fossil fuel industry."

THANK YOU to everyone in the movement who fought to defeat Keystone XL. This victory belongs to you. #noKXL

The pipeline would have carried oil from Alberta's oil sands south to refineries in Texas, where it would have been prepared for export to the world market.

Pipeline proponents claimed the project would create jobs and reduce U.S. reliance on foreign oil, although the oil that would have flowed through the pipeline was intended for export rather than domestic use.

Obama said the State Department, however, determined that the pipeline "would not make a meaningful long-term contribution to our economy.”

“If Congress was serious about wanting to create jobs, this was not the way to do it,” Obama said. He called for a bipartisan infrastructure plan that he said would create more than 30 times as many jobs as the pipeline project. He also noted that gas prices had already dropped without the pipeline. 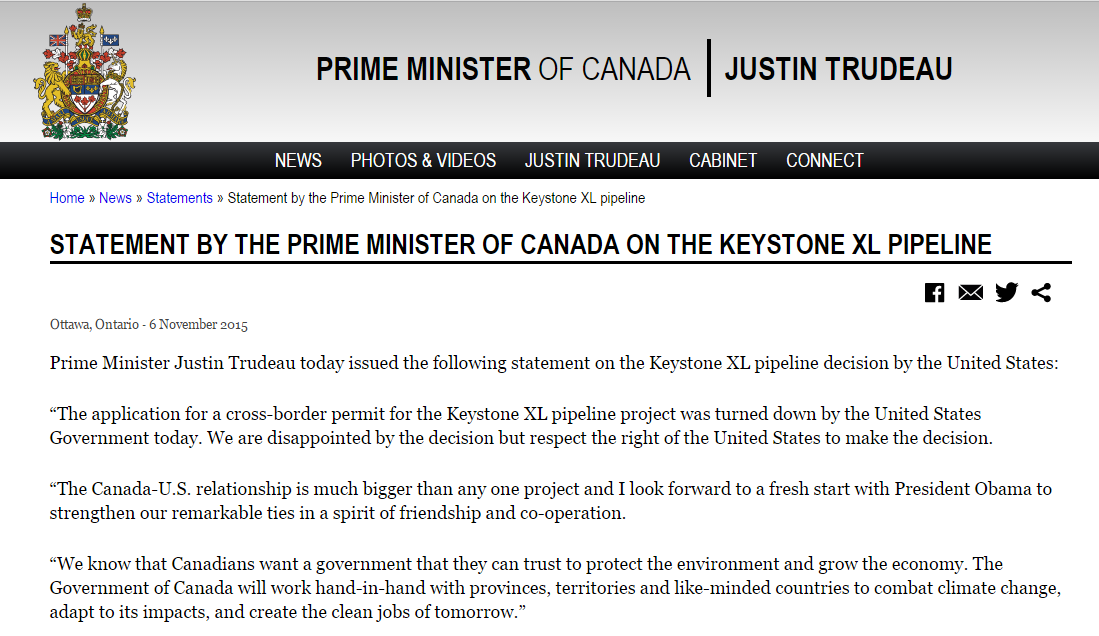 TransCanada, which is the company that applied to build the pipeline, had evidently sensed this final decision was coming.

Russ Girling, TransCanada's president and CEO, said Friday that the company is reviewing its options and may re-apply for a cross-border permit. "TransCanada and its shippers remain absolutely committed to building this important energy infrastructure project," he said.

Obama said the pipeline would do nothing to increase U.S. energy security or lower gas prices, which are already falling. "Shipping dirtier crude oil into our country would not increase America's energy security," he said.

The approximately 1,200-mile-long pipeline would have carried oil that requires more energy to pump from the ground and emits more greenhouse gases when it is burned, making it a particularly problematic project from a climate change standpoint. Studies published in the past year have shown that if the world is to limit global warming to 2 degrees Celsius (3.6 degrees Fahrenheit) or lower compared to preindustrial levels, oil from Canada's oil sands region in Alberta would have to remain in the ground rather than being burned.

Obama alluded to this in his remarks, when he said that some oil resources would "need to remain in the ground" in order to address climate change.

"... If we’re going to prevent large parts of this Earth from becoming not only inhospitable but uninhabitable in our lifetimes, we’re going to have to keep some fossil fuels in the ground rather than burn them and release more dangerous pollution into the sky," Obama said.

In a press statement, Kerry said his determination, too, was driven largely by climate change concerns as well as the conclusion that the pipeline would not benefit the economy.

"The critical factor in my determination was this: moving forward with this project would significantly undermine our ability to continue leading the world in combatting climate change," Kerry said.

"The United States cannot ask other nations to make tough choices to address climate change if we are unwilling to make them ourselves."

Obama had signaled that he was inclined to reject the pipeline, stating in June 2013 that the pipeline's potential effects on climate change would be a key criteria in the approval process.

"But I do want to be clear: Allowing the Keystone pipeline to be built requires a finding that doing so would be in our nation’s interest. And our national interest will be served only if this project does not significantly exacerbate the problem of carbon pollution," Obama said in a 2013 speech at Georgetown University.

"The net effects of the pipeline’s impact on our climate will be absolutely critical to determining whether this project is allowed to go forward. It’s relevant," he said.

Democratic candidates Hillary Clinton, Bernie Sanders and Martin O'Malley all opposed the project, while the Republican field of candidates has universally supported it...

When I'm president, Keystone will be approved, and President Obama's backwards energy policies will come to an end.

Both Jeb Bush and Marco Rubio have made approving Keystone a centerpiece of their energy proposals.