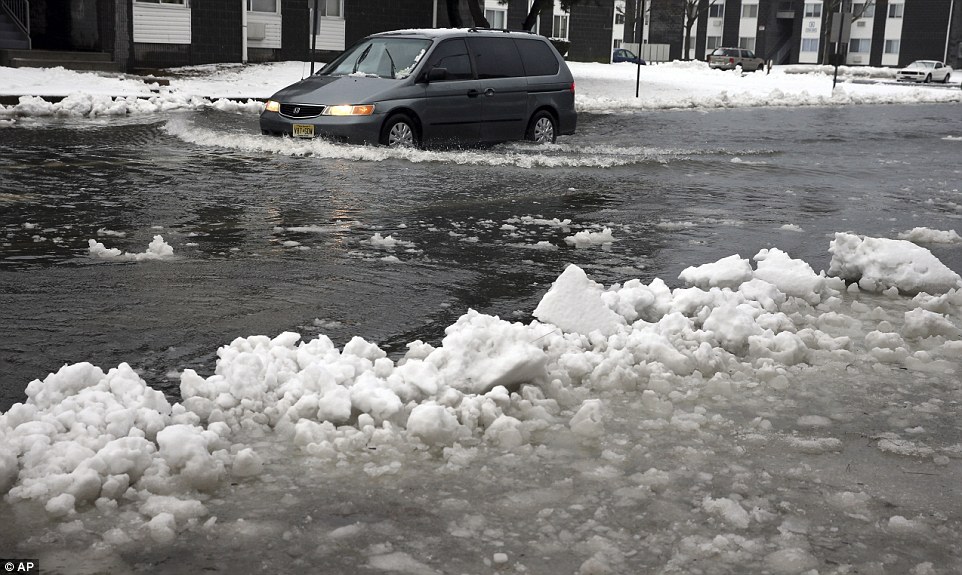 Floodwaters that washed icy brine into streets and homes along the eastern seaboard during Saturday’s blizzard reached heights in some places not experienced since Hurricane Sandy. “I just hope it isn’t a sign of things to come,” Pam Bross told a local newspaper as she mopped up the market she operates on a New Jersey street not normally reached by storm surges...

With tides and storm surges inching upward and inward, worsening floods are harbingers of even soggier times ahead. As the weekend’s winter storm hurtles across the Atlantic Ocean, bringing its flood risks to Europe, new research is pointing to an outsized role that ocean warming has been playing in raising sea levels — a problem normally associated with melting land ice. 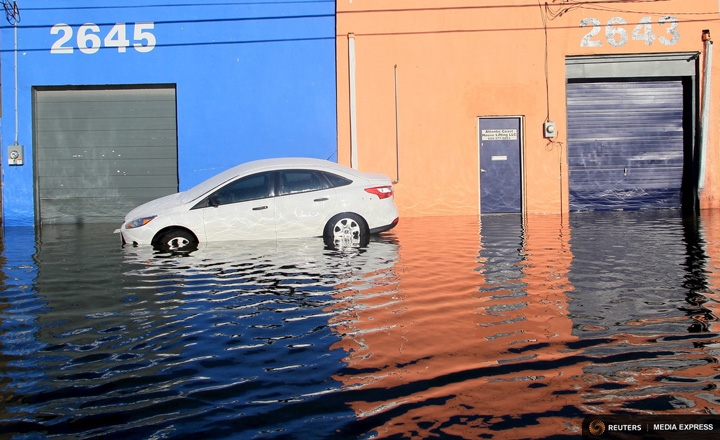 Water expands as it heats up, and oceans have been absorbing most of the heat trapped by greenhouse gases released by fossil fuel burning, deforestation and animal farming. A new study blames expansion of warming waters for as much sea level rise from 2002 through 2014 as the melting of all the glaciers and the Greenland and Antarctic ice sheets combined.

“Satellite observations show that sea level rise over the last decade is explained, by about 50 percent, by thermal expansion,” said Roelof Rietbroek of the University of Bonn, who led the research, which was published Monday in Proceedings of the National Academy of Sciences. 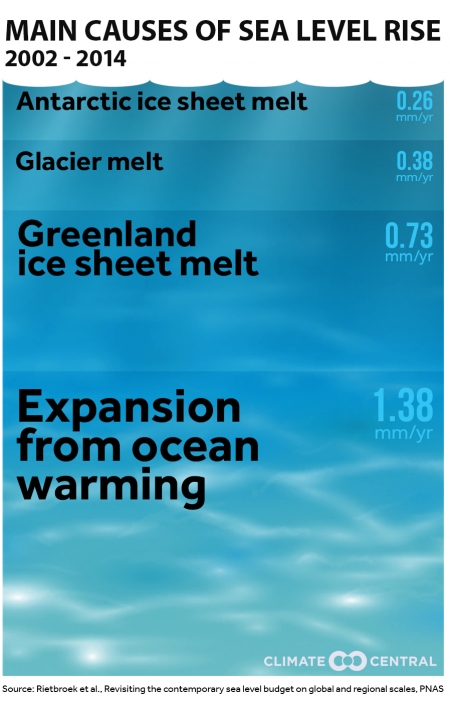 The team of scientists led by Rietbroek concluded that thermal expansion caused seas to rise globally during the 12 years studied by about two-thirds of an inch, with ice melt and other factors contributing to an overall rise of twice that amount.

Currents, winds, ocean cycles and other factors meant the effects were felt differently in different parts of the world. The East Coast and parts of Asia experienced rapid sea level rise during the study period, while the West Coast saw sea levels drop slightly — albeit temporarily.

Rietbroek said the new findings regarding rapid thermal expansion are encountering “pushback” from some scientists. But he said they’re consistent with models that some thought were overestimating thermal expansion in warming oceans.

Deep ocean warming became especially pronounced after the mid-1990s, recent research has revealed, including during a 15-year slowdown in warming detected at the planet’s surface. That slowdown, frequently dubbed a “global warming hiatus,” “pause” or “faux-pause,” was once was a great mystery.

Now, the waxing and waning of surface warming is understood to be part of a natural ocean cycle called the Pacific Decadal Oscillation or Interdecadal Pacific Oscillation. Strong trade winds associated with that cycle drove more atmospheric heat than normal into ocean depths from 1998 to 2013.

Then the cycle changed phases, leading to a sharp uptick in surface warming rates. Globally, surface temperatures in 2015 broke a record that had been set only one year before.

The change in the phase of the ocean cycle is also expected to flush surface waters back across the Pacific Ocean toward the West Coast, where sea level rise will worsen flooding.

“There’s never been a hiatus in ocean warming; there’s an ever-deeper penetration of the warming signal,” said Felix Landerer, an oceanographer at NASA’s Jet Propulsion Laboratory. He wasn’t involved with the new study, which he described as novel and thorough. “There has never been a hiatus in sea level rise in the last decade. Quite the contrary, I think we see an acceleration.” 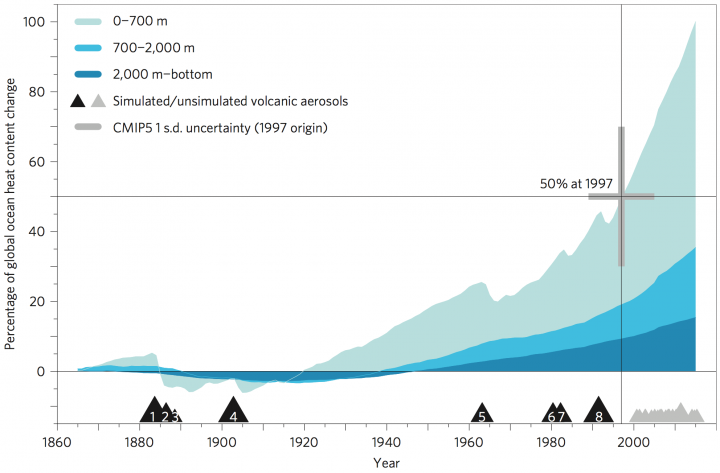 Research published this month showed that oceans have been warming rapidly, with half of the additional heat entering the oceans since 1997.
Credit: Lawrence Livermore National Laboratory/Nature Climate Change

Monday’s finding was based largely on comparisons of changes in water volumes and masses in the seas detected using satellites. Some of those measurements began after the turn of the century.

If it’s right, the conclusion would mean other efforts to tally the effects of ocean warming on sea-level rise using autonomous seafaring instruments have underestimated the scale of the problem. Monday’s paper was initially rejected by the journal because it didn’t sufficiently explain why the thermal expansion figures were so much greater than other estimates.

But the conclusion is expected to be generally corroborated by upcoming research involving Kevin Trenberth, a senior scientist with the National Center for Atmospheric Research’s climate analysis team.

Trenberth said new findings of ocean warming, and warming-induced expansion, which is known as steric expansion, challenge figures that have been accepted the Intergovernmental Panel on Climate Change, a United Nations body that assesses climate science. 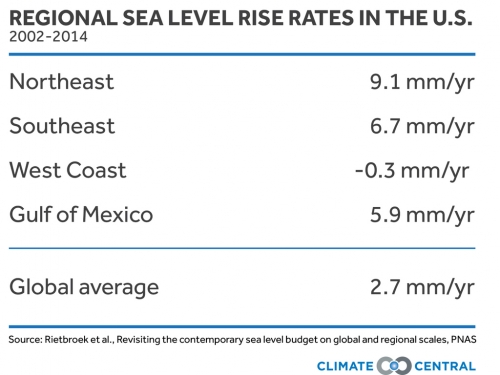 “Our new estimates of the steric rise in sea levels are considerably greater than those often accepted,” Trenberth said. “I think a lot of the estimates that are in the literature are very conservative. They’re low in terms of changes in ocean heat content.”

It’s hard to say what the findings from 2002 to 2014 might mean for future sea level rise, which Climate Central has estimated could expose lands inhabited by 150 million people to chronic flooding by 2100.

Better understanding ocean warming rates and their effects of sea levels could, however, improve the accuracy of projections. “Understanding the past is a prelude to making more confident predictions in the future,” Trenberth said.

Rietbroek, Trenberth and their colleagues think existing estimates of sea-level rise from ocean expansion may have been thrown off by sampling problems with the international fleet of autonomous Argo floats, which plumb the oceans for salinity, heat and other measurements.

“The Argo floats are not well distributed over the ocean,” said Jürgen Kusche, a University of Bonn professor who helped produce Monday’s paper.

The satellite measurements used to produce the estimates for thermal expansion included in Monday’s paper “provide a much more homogeneous — but not perfect — coverage” of ocean trends, Kusche said. “It’s a surprise that it is so much bigger.”

You May Also Like:
Study: Grid For Renewables Key to Cutting Emissions
Weekend Blizzard Was a ‘Multi-Billion-Dollar’ Disaster
The Future of ‘Epic Blizzards’ in a Warming World