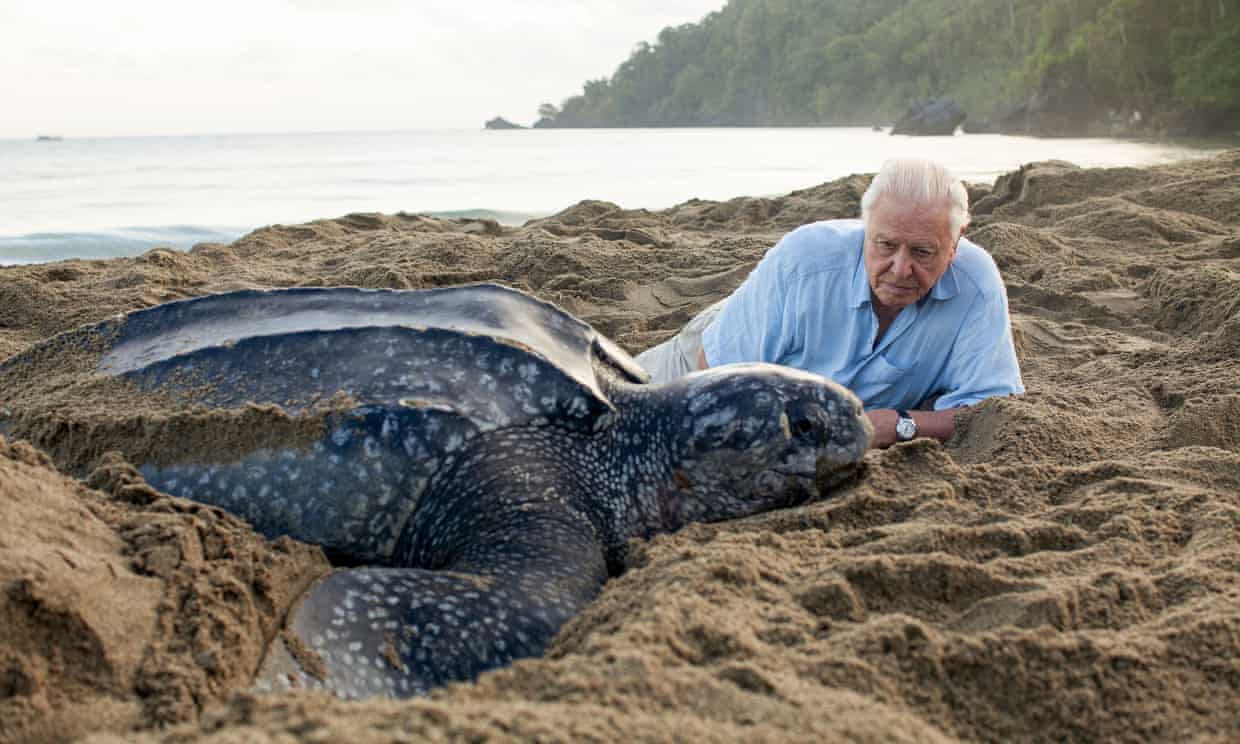 The leatherback turtle is the largest turtle on the planet. David Attenborough travels to Trinidad to meet a community trying to save these giants. Photograph: Gavin Thurston

The world’s oceans are under the greatest threat in history, according to Sir David Attenborough. The seas are a vital part of the global ecosystem, leaving the future of all life on Earth dependent on humanity’s actions, he says.

Attenborough will issue the warning in the final episode of the Blue Planet 2 series, which details the damage being wreaked in seas around the globe by climate change, plastic pollution, overfishing and even noise.

Previous BBC nature series presented by Attenborough have sometimes been criticised for treading too lightly around humanity’s damage to the planet. But the final episode of the latest series is entirely dedicated to the issue.

“For years we thought the oceans were so vast and the inhabitants so infinitely numerous that nothing we could do could have an effect upon them. But now we know that was wrong,” says Attenborough. “It is now clear our actions are having a significant impact on the world’s oceans. [They] are under threat now as never before in human history. Many people believe the oceans have reached a crisis point.” 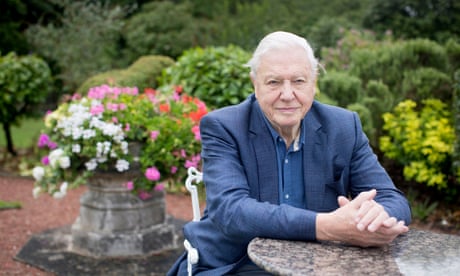 David Attenborough on the scourge of the oceans: 'I remember being told plastic doesn't decay, it's wonderful'. Read more...

Attenborough says: “Surely we have a responsibility to care for our blue planet. The future of humanity, and indeed all life on Earth, now depends on us.”

BBC executives were reportedly concerned about the series appearing to become politicised and ordered a fact-check, which it passed. The series producer, Mark Brownlow, said it was impossible to overlook the harm being caused in the oceans: “We just couldn’t ignore it – it wouldn’t be a truthful portrayal of the world’s oceans. We are not out there to campaign. We are just showing it as it is and it is quite shocking.” 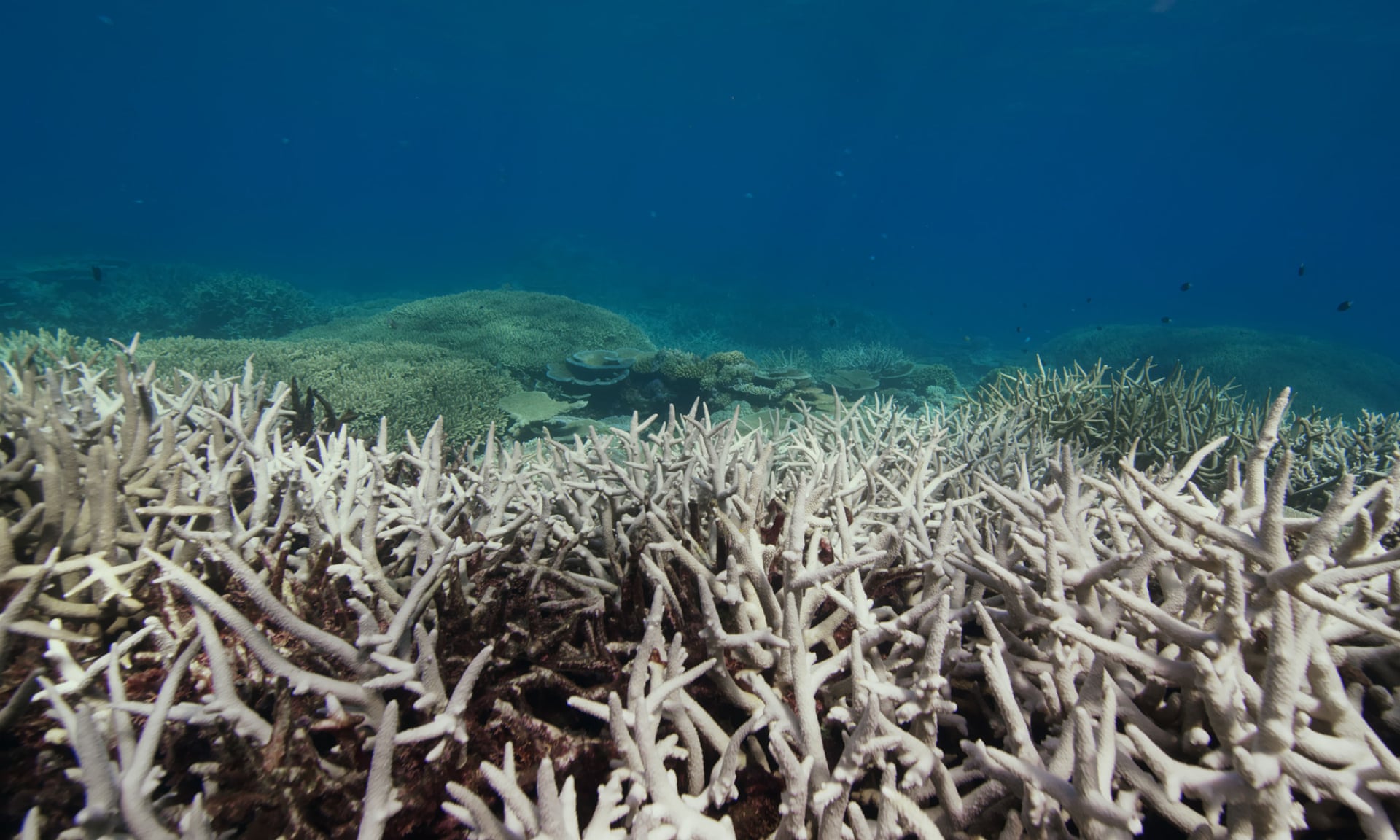 A bleached section of the Great Barrier Reef in Australia. Photograph: BBC NHU

Brownlow said much of the footage shot of albatross chicks being killed by the plastic they mistake for food were too upsetting to broadcast. The programme also filmed on the Great Barrier Reef in 2016, witnessing the worst bleaching event in its history.

Climate change is causing ocean temperatures to rise, bleaching the corals vital as nurseries for ocean life, and waters are warming rapidly in Antarctica too. Jon Copley, from the University of Southampton and one of many scientists appearing in the final episode, says. “What shocks me about what all the data shows is how fast things are changing here [in Antarctica]. We’re headed into uncharted territory”

Carbon dioxide from fossil fuel burning also dissolves in seawater, making it more acidic. Prof Chris Langdon, at the University of Miami, says it is “beyond question” that the problem is manmade. “The shells and the reefs really, truly are dissolving. The reefs could be gone by the end of the century.” 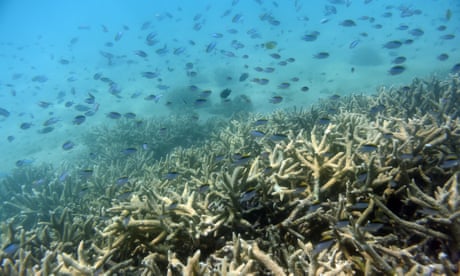 The noise from shipping, tourism, and fossil fuel exploration is also revealed as harming sea life. Steve Simpson, at the University of Exeter, who works on coral reefs in southeast Asia, says: “There is a whole language underwater that we are only just getting a handle on. They use sound to attract a mate, to scare away a predator. You hear pops and grunts and gurgles and snaps.” He shows the noise of motorboats distracting saddleback clownfishes from warning against a predator attack.

The Blue Planet 2 team found plastic everywhere they filmed, even in the most remote locations such as South Georgia island, an important breeding site for wandering albatrosses. There, Lucy Quinn from the British Antarctic Survey says many chicks are killed by plastic fed to them by their parents, including one young bird whose stomach was punctured by a plastic toothpick.

Overfishing, which remains prevalent around the world, is also addressed. “Every night thousands of miles of fishing lines laden with hooks are set – there is enough, it is said, to wrap twice around the world,” says Attenborough. But the programme also highlights some success stories, such as the revival of sperm whales off Sri Lanka and herring stocks off Norway after bans or restrictions were put in place. 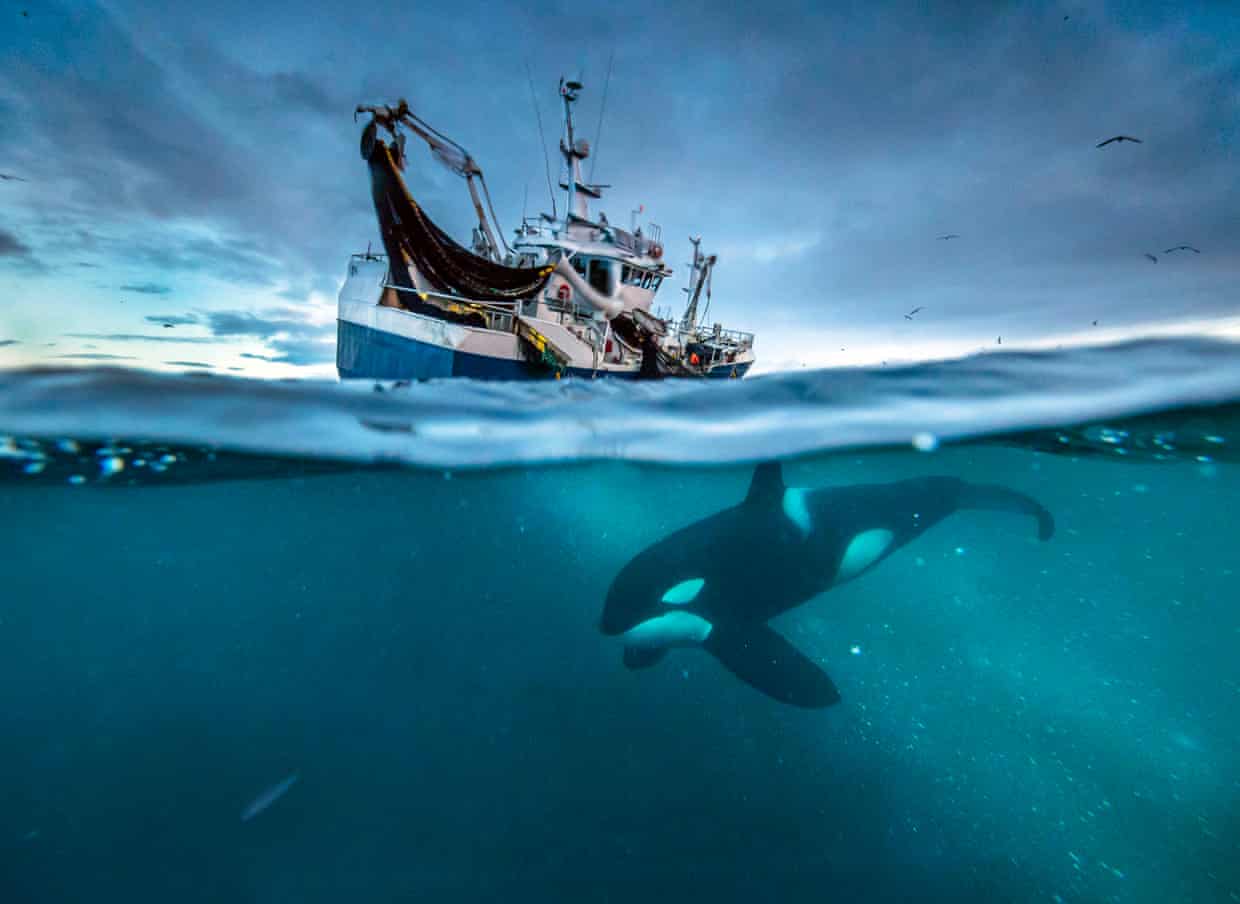 Strict management of the herring fishery in Norway has saved it from collapse. Herring now draw in humpback whales and orca. Photograph: Audun Rikardsen

Attenborough also visits Trinidad, where the conservationist Len Peters has transformed the prospects of the giant leatherback turtles who come to the island to lay their eggs and whose numbers have fallen catastrophically in recent decades. “I grew up in a house where turtle meat was normal,” says Peters. But his work to end turtle hunting and encourage tourism has seen numbers rise from 30-40 to more than 500.

Quinn says the oceans are of vital importance for the whole world: “The oceans provide us with oxygen, they regulate temperature, they provide us with food and energy supplies. It is unthinkable to have a world without a healthy ocean.”

Daniel Pauly, who leads the Sea Around Us programme at the University of British Columbia in Canada, and was not involved in Blue Planet 2, endorsed its stark conclusion. He said vast, subsidised fishing fleets were scraping the bottom of the barrel and that ocean acidification could be terminal for many species.

Pauly also warned of the dangers of plastic attracting toxic chemicals and then being eaten: “They become poison pills.” Pauly said the question facing humanity now was simple: “Are we going to fight for the oceans or not?”

The final episode of Blue Planet 2 is at 8pm on BBC1 on 10 December in the UK. The full series will then be available online via the iPlayer, including in ultra HD and high dynamic range, the first time the BBC has provided such content.