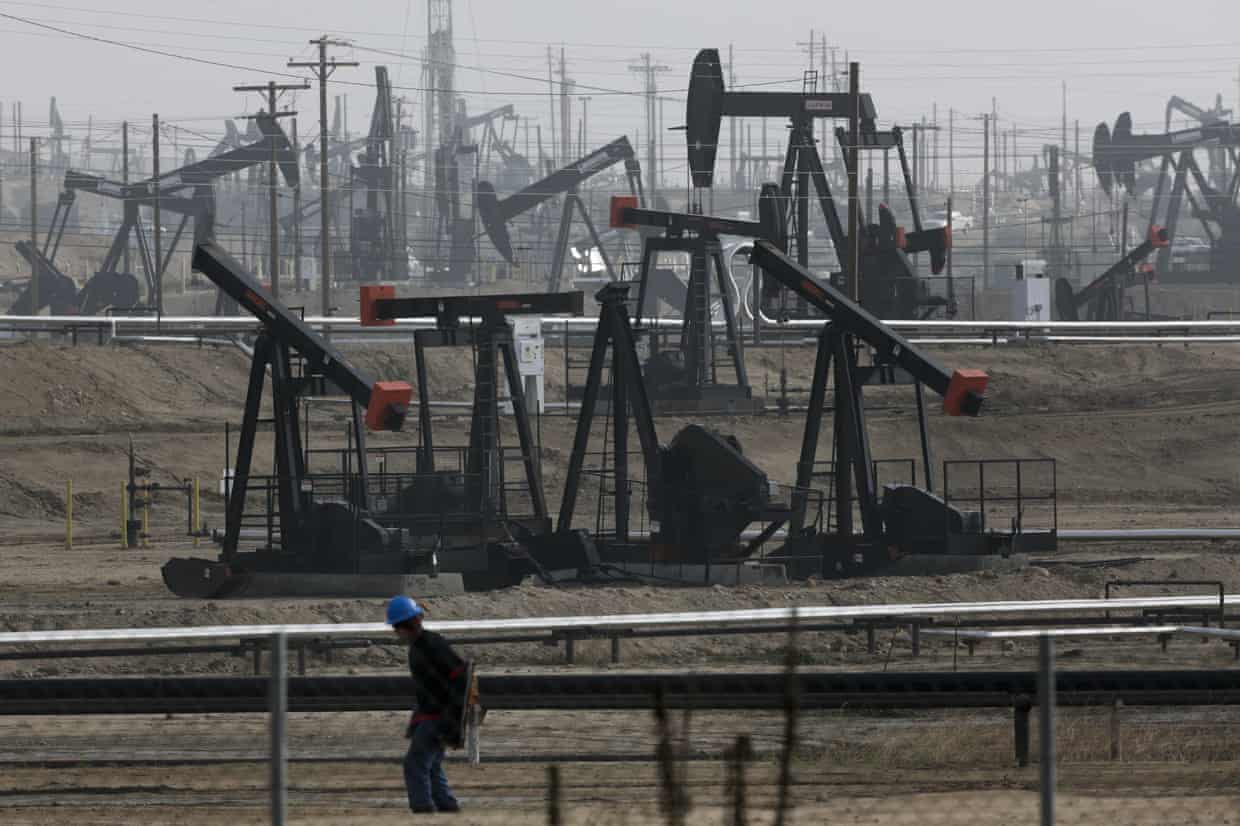 The new fund will focus on reducing leaks of natural gas and technology to capture and store carbon emissions when gas is burned to produce electricity, as well as increasing fuel efficiency of vehicles. Photograph: Jae C. Hong/AP

Analysts criticize fund – which focuses on cutting the impact of fossil fuels but will not support renewable energy - calling it a ‘drop in the ocean’...

A $1bn fund for cutting the climate change impact of oil and gas has been announced by 10 of the world’s biggest oil companies, aimed at keeping the firms in business and cutting the burning of coal.

Global action to cut carbon emissions threaten the future of the oil industry and the fund was revealed on the day the global Paris climate change agreement came into force. But analysts called the sum a “drop in the ocean” which showed the companies were not serious in tackling global warming.

The new fund will focus on reducing leaks of natural gas – a powerful greenhouse agent – and technology to capture and store carbon emissions when gas is burned to produce electricity, as well as increasing the fuel efficiency of vehicles. But it will not support the renewable energy, smart grid and storage technologies which are revolutionising the electricity industry.

Sustainable investment and climate change campaigners dismissed the initiative as ‘greenwash’, noting that, with the fund to be deployed over the next decade, the $100m annual investment represents just 0.1% of the companies’ current level of yearly capital expenditure.

Scientists have calculated that half of all known gas reserves and a third of oil reserves cannot be burned if the world is to meet the Paris limit of 2C of warming. This makes the oil companies’ current business model of continuing exploration for new reserves nonsensical, say the campaigners.

The 10 companies that comprise the Oil and Gas Climate Initiative (OGCI) produce 20% of the world’s oil and gas. Bob Dudley, chief executive of BP and OGCI chairman, said: “We all absolutely realise the world will move to a low-carbon world. Don’t worry, we got it. The technology to monitor and reduce fugitive methane [gas] emissions, that is an essential licence for us to advocate for natural gas.”

Dudley, whose own pay is higher than BP’s contributions to the fund, said gas produced half the emissions of coal, the use of which is increasing in Asia. “The price of coal is low and people are choosing affordable energy not clean energy. It’s going to make gas miss the opportunity.”

Patrick Pouyanné, CEO of Total, said the technologies the new fund would back were vital: “It is a matter for us of being able to maintain our business in the future.”

The OGCI see carbon capture and storage (CCS) technology as a way to prolong the continued use of fossil fuels. Scientists agree CCS is vital as without it the cost of tackling climate change will hugely increase, according to the the UN’s climate science panel. But developing commercial scale CCS is likely to require many billions of dollars.

Oil and gas contribute about 37% of global carbon emissions, with transport a major user of oil. The OGCI said it will work with auto manufacturers to develop more efficient vehicles but this will compete with the fast growth of electric cars.

Defending the relatively small size of the fund, Josu Jon Imaz, CEO of Repsol, said: “The target of this fund is to be a seed, a catalyst.” The new fund was not investing in renewable energy as it wanted to focus on where oil companies could have the most impact, he said.

But Danni Paffard, at climate campaign group 350.org said: ‘This announcement is outrageous filibustering from an industry with no future. Forget their smoke and mirrors offerings, the fossil fuel industry’s basic business plan doesn’t stack up with global climate goals. Real climate action means leaving oil, coal and gas reserves in the ground, and until they do that nobody will be falling for this cynical PR spin.”

Jonathan Marshall, energy analyst at the Energy and Climate Intelligence Unit, a UK-based thinktank, said: “Investing $1bn over 10 years averages to just $10m per year per company involved. This figure is a drop in the ocean,” he said. Bill Gates alone is contributing $1bn to the Breakthrough Energy Coalition, Marshall noted.

Juliet Philips, at sustainable investment NGO ShareAction, said: “Until initiatives like those announced by the OGCI are backed up by long-term corporate strategies that are consistent with achieving the Paris treaty, scepticism of their sincerity is inevitable.” Managers of investments totalling more than $2.6tn have already committed to pulling out of fossil fuel companies.

Shell CEO, Ben van Beurden, said: “We cannot burn all the hydrocarbons on the planet in an unmitigated way but there is also another truism that there is no alternative to using some hydrocarbons for a very long time to come.”

He said economics would determine which fossil fuels are left in the ground. Amin Nasser, chief executive of Saudi Aramco, said: “Oil will continue to be part of the energy mix for decades to come.”

Oil companies are under increasing pressure from both climate change policy and the rise of renewable energy. In October, the International Energy Agency said the rollout of renewables was accelerating and predicted capacity from renewable sources will grow faster than oil, gas, coal or nuclear power in the next five years.

On Wednesday, OGCI-member Shell, said oil demand could peak as soon as five years from now, a moment that would herald the end of oil production growth.