OMG! MEASUREMENTS OF GREENLAND GIVE US A GLIMPSE OF FUTURE SEA RISE... 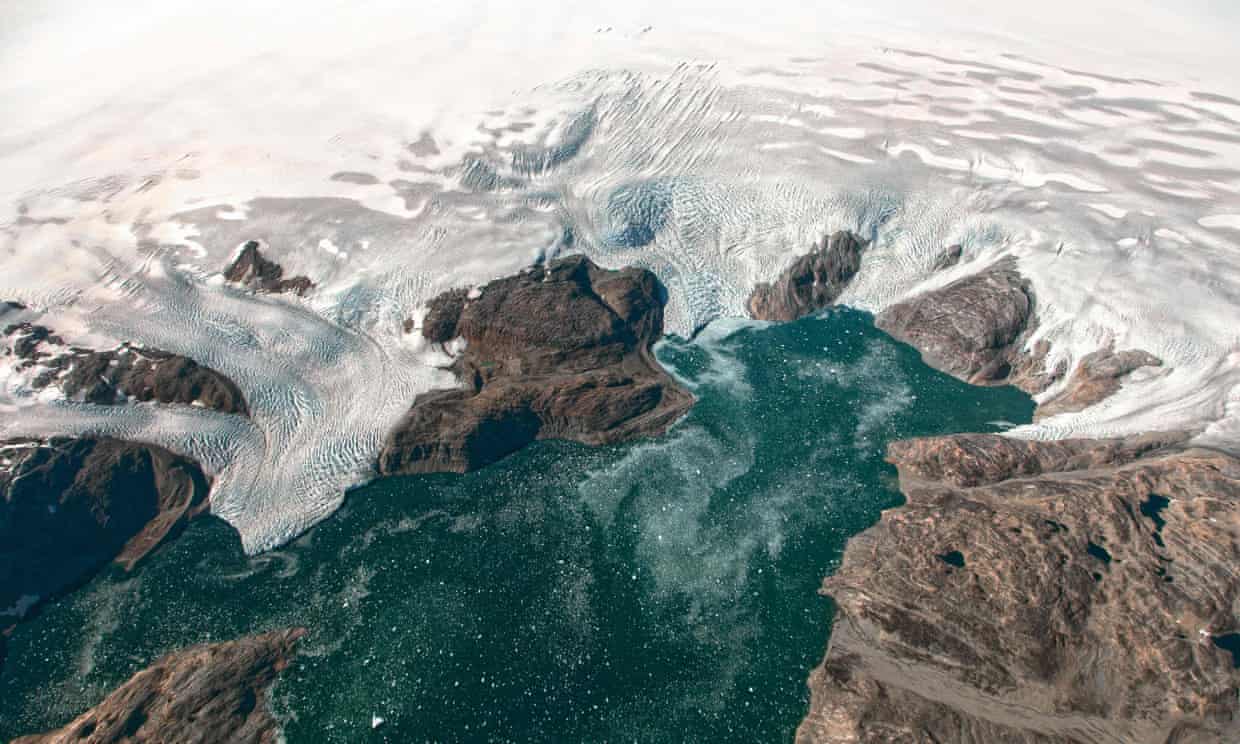 This NASA Earth Observatory file photo taken on September 22, 2016 and observed from the HU-25A Guardian aircraft shows the Bruckner and Heim glaciers where they flow into Johan Petersen Fjord in southeastern Greenland. Photograph: Jeremy Harbeck/AFP/Getty Images

If you meet a group of climate scientists, and ask them how much sea levels will rise by say the year 2100, you will get a wide range of answers. But, those with most expertise in sea level rise will tell you perhaps 1 meter (a little over three feet). Then, they will immediately say, “but there is a lot of uncertainty on this estimate.” It doesn’t mean they aren’t certain there will be sea level rise – that is guaranteed as we add more heat in the oceans. Here, uncertainty means it could be a lot more or a little less.

Why are scientists not certain about how much the sea level will rise? Because there are processes that are occurring that have the potential for causing huge sea level rise, but we’re uncertain about how fast they will occur. Specifically, two very large sheets of ice sit atop Greenland and Antarctica. If those sheets melt, sea levels will rise hundreds of feet.

Parts of the ice sheets are melting, but how much will melt and how fast will the melting occur? Are we talking decades? Centuries? Millennia? Scientists really want to know the answer to this question. Not only is it interesting scientifically, but it has huge impacts on coastal planning.

One reason the answer to this question is illusive is that melting of ice sheets can occur from above (warm air and sunlight) or from below (warm ocean waters). In many instances, it’s the melting from below that is most significant – but this melting from below is really hard to measure.

With hope we will have a much clearer sense of ice sheet melting and sea level rise because of a new scientific endeavor that is part of a NASA project - Oceans Melting Greenland (OMG). This project has brought together some of the best oceanographers and ice experts in the world. The preliminary results are encouraging and are discussed in two recent publications here and here.

In the papers, the authors note that Greenland ice loss has increased substantially in recent decades. It now contributes approximately 1/3 to total sea level rise. The authors want to know whether this contribution will change over time and they recognize that underwater processes may be the most important to study. In fact, they note in their paper:

Specifically, our goal is improved understanding of how ocean hydrographic variability around the ice sheet impacts glacial melt rates, thinning and retreat.

In plain English, they want to know how water flow around Greenland affects the ice melt.

Their experiments are measuring a number of key attributes. First, yearly changes in the temperature of ocean water near Greenland. Second, the yearly changes to the glaciers on Greenland that extend into the ocean waters. Third, they are observing marine topography (the shape of the land underneath the ocean surface).

The sea floor shape is quite complicated, particularly near Greenland. Past glaciers carved deep troughs in the sea floor in some areas, allowing warm salty water to reach huge glaciers that are draining the ice sheet. As lead OMG investigator Josh Willis said:

What’s interesting about the waters around Greenland is that they are upside down. Warm, salty water, which is heavy, sits below a layer of cold, fresh water from the Arctic Ocean. That means the warm water is down deep, and glaciers sitting in deep water could be in trouble. 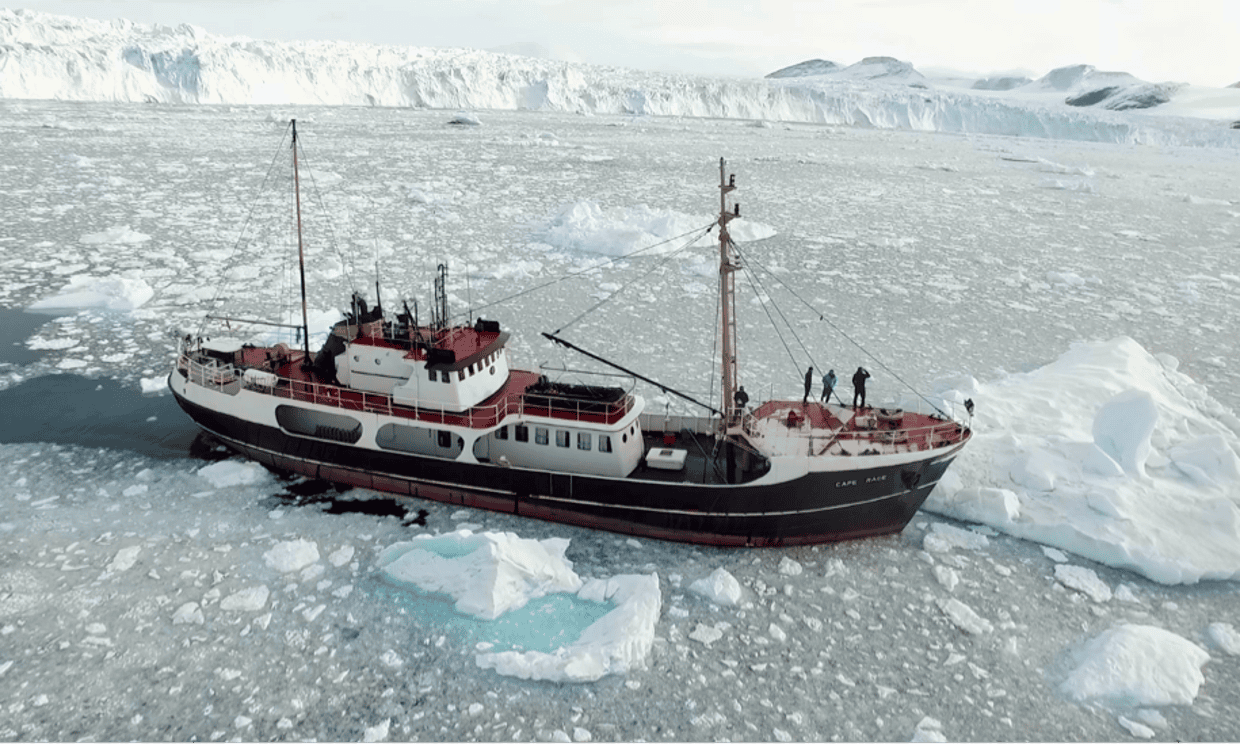 As the warm water attacks marine glaciers (glaciers that extend into the ocean), the ice tends to break and calve, retreating toward land. In some cases, the glaciers retreat until their grounding line coincides with the shore. But in other cases the undulating surface allows warm water to wear the glacier underside for long distances and thereby increase the risk of large calving events.

Oftentimes, when glaciers near the coast break off they uncork other ice that can then more easily flow into the oceans.

One of the ways the scientists are making measurements is through hundreds of probes dropped from airplanes that fly over the region. The probes, called Airborne Expendable Bathythermographs, then fall through the ocean waters collecting data until they hit the ocean floor. They are also using more traditional ship-based observations.

So what has been accomplished so far? Well in the year and a half that this mission has been ongoing, they have shown that they are capable of making the required measurements. They have also cataloged how water temperature changes as the water moves along the Greenland coast, and they have discovered that many large glaciers along the northwest and southeast coastline sit in deep water, where they can interact with the oceans. As Willis said:

It’s an exciting year for OMG. We get our first look at how the oceans and glaciers are changing from one year to the next.

For the next four years, we can look forward anxiously to see whether ice loss trends are benign (we hope) or a worst-case scenario. It’s projects like this one that will help provide us with answers to important climate questions.

Dr John Abraham is a professor of thermal sciences. He researches in climate monitoring and renewable energy generation for the developing world. His energy development work has extended to Africa, South America and Asia.