ON CLIMATE CHANGE, ANGELS AND DEMONS ARE BATTLING OVER TRUMP’S SOUL... 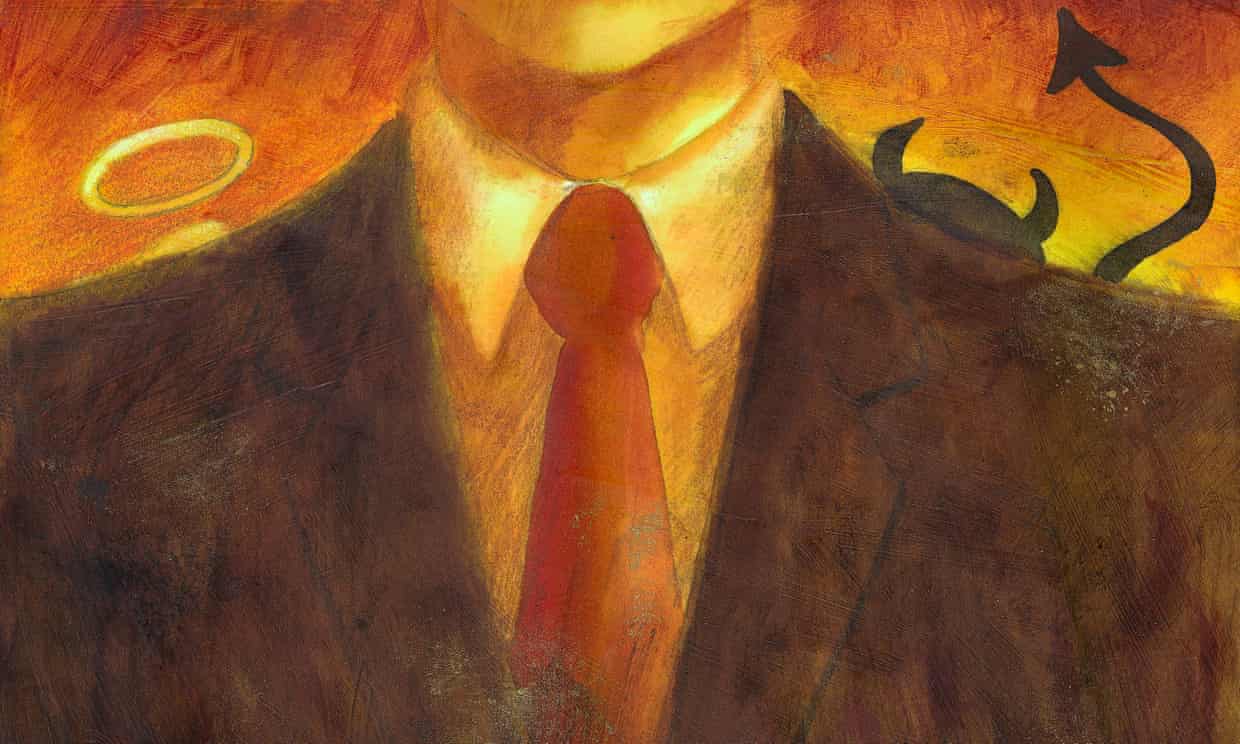 Trump is filling his administration with fossil fuel industry puppets; only Ivanka has a chance to preserve the climate...

There are signs that a war may be brewing over President-elect Donald Trump’s climate legacy, and the bad guys are winning.

In one corner: Team Ivanka

His daughter Ivanka appears to be establishing a role as the one person who might prevent the Trump administration from undoing all of the progress made by the Obama administration in cutting US carbon pollution, and instead establishing policies that will maximize the country’s burning of fossil fuels. According to Politico, Ivanka Trump wants to make climate change one of her signature issues. She recently coordinated meetings between the president-elect and Al Gore and Leonardo DiCaprio.

DiCaprio in particular wisely focused his presentation on the fact that a shift to clean renewable energy would create millions of jobs. The best way to help a businessman like Donald Trump appreciate the importance and benefits of cutting carbon pollution is to focus on the economic opportunities presented by the coming green technology revolution. It’s an opportunity that China is poised to seize upon, as UCLA Law School’s Alex Wang noted:

Climate change regulation is seen as an economic tool aimed at moving China’s economy toward the low-carbon, high-tech, and clean energy industries of the future. China would like nothing more than to have the U.S. retreat from clean energy innovation and allow it to step into the breach.

The New York Times also reports that Trump plans to turn over operational control of the family business to his two sons, while Ivanka would take a leave of absence and is considering moving to Washington DC. By distancing herself from the business to avoid conflicts of interest, Ivanka may be positioning herself to become the most powerful first daughter in US history; potentially the first to serve as an influential presidential policy advisor.

However, even if her desire to spur action on climate change is sincere, Ivanka Trump faces a veritable army of opposition among those already nominated and appointed to work in the Trump administration.

In the other corner: Team Big Oil

For those concerned about the tremendous threats posed by climate change, Trump’s nominations and appointments to date have been a nightmare. Trump selected long-time climate denier and oil industry spokesman Myron Ebell to head his EPA transition team, and as a result, predictably nominated oil industry puppet Scott Pruitt as EPA administrator. Pruitt is among the Republican attorneys general who, after receiving substantial political donations to meet with fossil fuel companies, sued the EPA to stop its Clean Power Plan. Pruitt quite literally does the fossil fuel industry’s bidding:

A 2014 investigation by The Times found that energy lobbyists drafted letters for Mr. Pruitt to send, on state stationery, to the E.P.A., the Interior Department, the Office of Management and Budget and even President Obama, outlining the economic hardship of the environmental rules.

If confirmed (which Senate Democrats are poised to fight), Pruitt will do everything in his power to eliminate the EPA’s efforts to cut carbon pollution. He’s joined by the leader of Trump’s Energy Department transition team, Thomas Pyle. Pyle is a former lobbyist for Koch Industries and other fossil fuel companies. He recently released a memo outlining “The Trump Administration’s Energy Plan” that’s been described as reading like a fossil fuel industry wish list, including these policy proposals:

For example, Pyle claims that the EPA finding that greenhouse gases endanger public health and welfare, which was based on the best available science and mandates that the EPA regulate carbon pollution, “will be reconsidered and possibly revoked, marking a major blow to underpinning for many climate regulations.” The memo also states that the increased fuel efficiency standards passed by the Obama administration “will either be completely withdrawn or revised and phased out to be closer to the current levels of fuel economy.”

In short, the Trump Administration’s energy plan focuses on undermining every effort the USA has made to cut its carbon pollution from cars and power plants. The Energy Department transition team is also asking for lists of government employees who have worked on climate issues, which would lay the foundation for efforts to eliminating all government efforts to cut carbon pollution, and potentially launching witch hunts against scientists.

Pruitt and Pyle represent the tip of the fossil fuel industry’s total control over Trump’s incoming administration. George Monbiot listed a number of his staffers who come from fossil fuel industry lobbying or think tanks. Trump’s space policy advisor wants to kneecap Nasa’s critical climate research. His nomination for Secretary of Interior Cathy McMorris has voted against 96% of the environmental legislation that’s come before her in the House of Representatives, including voting to bar the EPA from regulating greenhouse gases and voting against enforcing limits on carbon pollution. She’s a big proponent of increased drilling for oil and gas.

His EPA landing team is full of science deniers and EPA critics who have harassed climate scientists. His chief strategist Steven Bannon used to run Breitbart, which publishes some of the worst climate denial imaginable (sometimes combined with blatant misogyny for good measure). And to top it all off, Trump’s choice for Secretary of State is the CEO of the world’s largest oil company, which also is historically the biggest funder of climate misinformation and denial and continues to fund climate denial groups.

On the issue of climate change, Trump resembles a character with an angel on one shoulder and a devil on the other. Except in this case, the devil also has a horde of demons beside him. Trump has filled every position of power with fossil fuel industry allies who have years of experience in undermining government efforts to slow human-caused global warming.

Trump certainly listens to and trusts his daughter Ivanka, who in Gore and DiCaprio, has wisely invited the counsel of high-profile individuals that are well-informed about the subject of climate change. However, it’s difficult to imagine that Ivanka’s influence on the president can outweigh the direct actions of the climate foes who he has appointed to powerful government positions, especially since she’s new to government and policy debates. Obviously her counsel to date hasn’t stopped Trump from continuing to make these nightmarish appointments.

To apply another metaphor, the farmer’s daughter is warning him that he needs to protect the egg supply, but the farmer has put a pack of foxes in charge of guarding the henhouse. If she’s sincere about wanting to preserve a safe climate, Ivanka Trump faces a tremendous challenge. We can only hope that somehow, against all odds, she’s equal to the task.

The winner of this battle will determine whether the Trump name forever becomes synonymous with climate heroism or villainy. So far, the villains are winning bigly.