ONCE A FIXTURE, CLIMATE SKEPTICS SAY THEY ARE BEING STIFLED IN PARIS...

To be a climate change skeptic in Paris this week means facing heavy odds...

Arrayed against them are thousands of environmentalists, scientists and even big business leaders, who have come to U.N.-sponsored climate talks to pledge their commitment to cutting the manmade emissions that an overwhelming majority of scientists say are warming the planet.

Unlike at past U.N. summits where their presence was a fixture, the mostly American skeptics have this time been forced to hold court at a downtown Paris hotel, dogged by climate change activists handing out "Wanted" flyers accusing them of responsibility "for destruction of our future”.

“This is the only group essentially that has had to make their own space and their own time to get heard,” said Jim Lakey, communications director of the Chicago-based Heartland Institute, which promotes scepticism about manmade climate change.

The group's "counter conference" at the Hotel California filled just a handful of the 70 seats, and was punctuated by shouts from protesters.

“It is exhausting to endure all this, dealing with constant attacks," Lakey said.

To diplomats and officials at the real summit, the skeptics are yesterday’s men.

"Now you don’t hear much about skeptics," U.N. Secretary General Ban Ki-moon said on Monday as he opened the second week of talks to bind both rich and poor nations to cuts in greenhouse gas emissions.

But there is one place the skeptics are not ignored: in conservative circles in the United States, where they retain a powerful voice in a Republican party openly hostile to policies that drive a shift from fossil fuels to renewable energy sources.

Republican lawmakers have vowed to block the billions of dollars that President Barack Obama has pledged to help developing nations adapt to climate change, and polls show American opinion on the need for a climate deal largely split along party lines.

"The tenor of the debate in the U.S. is being noticed, and to the extent that these deniers had some role in creating that dynamic within the Republican electorate, they’ve certainly had an impact," said Alden Meyer, director of strategy and policy for the Union of Concerned Scientists, which, among other things, seeks to spread the scientific consensus that manmade global warming is a fact.

But the images of skeptics being hounded by green activists also feed conservative arguments that their critics are afraid of debate. The citizens' activist group Avaaz posted more than a thousand "Wanted" posters across the city featuring the images and names of climate skeptics opposed to a global accord.

Emma Ruby-Sachs, acting executive director of Avaaz, said the campaign was intended to let arriving environment ministers know that "they shouldn't be listening to business interests, they should be listening to the people".

"The environmental movement doesn't want to have a debate; they just want to put forward a single message that everyone must adhere to," he said.

"When you try to smother different points of view, you disrespect science, and basic human rights."

NO ROOM FOR SKEPTICS

Climate skeptics have been a background presence at previous U.N. climate summits, most memorably in 2012 when Christopher Monckton, then-head of research for the Eurosceptic UK Independence Party, was ejected from talks in Doha.

Monckton had impersonated a delegate from Myanmar to secure a platform on the conference floor, and used it to declare global warming a fiction.

But this year they are hard to find in the conference center.

"They haven't been too friendly to skeptics this year," said Marc Morano, a former Republican party worker who runs the skeptical Climate Depot blog for the Committee For A Constructive Tomorrow (CFACT), based in Washington, D.C.

Morano said his group, which had the sole skeptic booth in the venue's exhibit hall, had not done as much work inside the U.N. summit grounds as it normally does, in part because organizers had not issued enough passes.

A U.N. official did not respond to a request for comment, though organizers have said they had to ration passes because of demand.

On Monday night, Morano showed his new film, "Climate Hustle" in a Paris cinema, featuring climate-sceptic scientists. Police cordoned off the road leading to the venue as guests lined up and a demonstrator hung a banner on a nearby gate reading "Welcome Heartland Institute Scum".

"Global warming is a global heist," said David Rothbard, CFACT's director, arguing that the result of a climate deal would be a loss of U.S. sovereignty.

But the skeptics are swimming against the tide in Paris.

"The only endangered species now," said Unilever Chief Executive Paul Polman during a business leaders' lunch in Paris this week, "is the climate change denier."

PARIS | By Richard Valdmanis
source: http://www.reuters.com/
To receive the latest breaking news on global warming issues, click here and go to our climate blog. Look to the bottom right of the page for the climate blog Subscribe box to automatically get our RSS news feed and each new story.
To learn what you can do that is effective to help fix global warming caused climate destabilization, click here.
To learn why the term climate destabilization is replacing the terms climate change and global warming, click here. 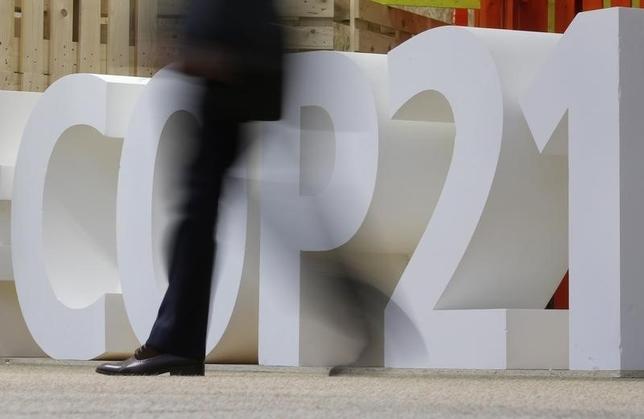 A man walks past a logo at the climate Generations area at the World Climate Change Conference 2015 (COP21) at Le Bourget, near Paris, France, December 1, 2015.
Reuters/Christian Hartmann