ONE OF THE CLEAREST SIGNS OF CLIMATE CHANGE IN HURRICANES MARIA, IRMA, AND HARVEY WAS THE RAIN... 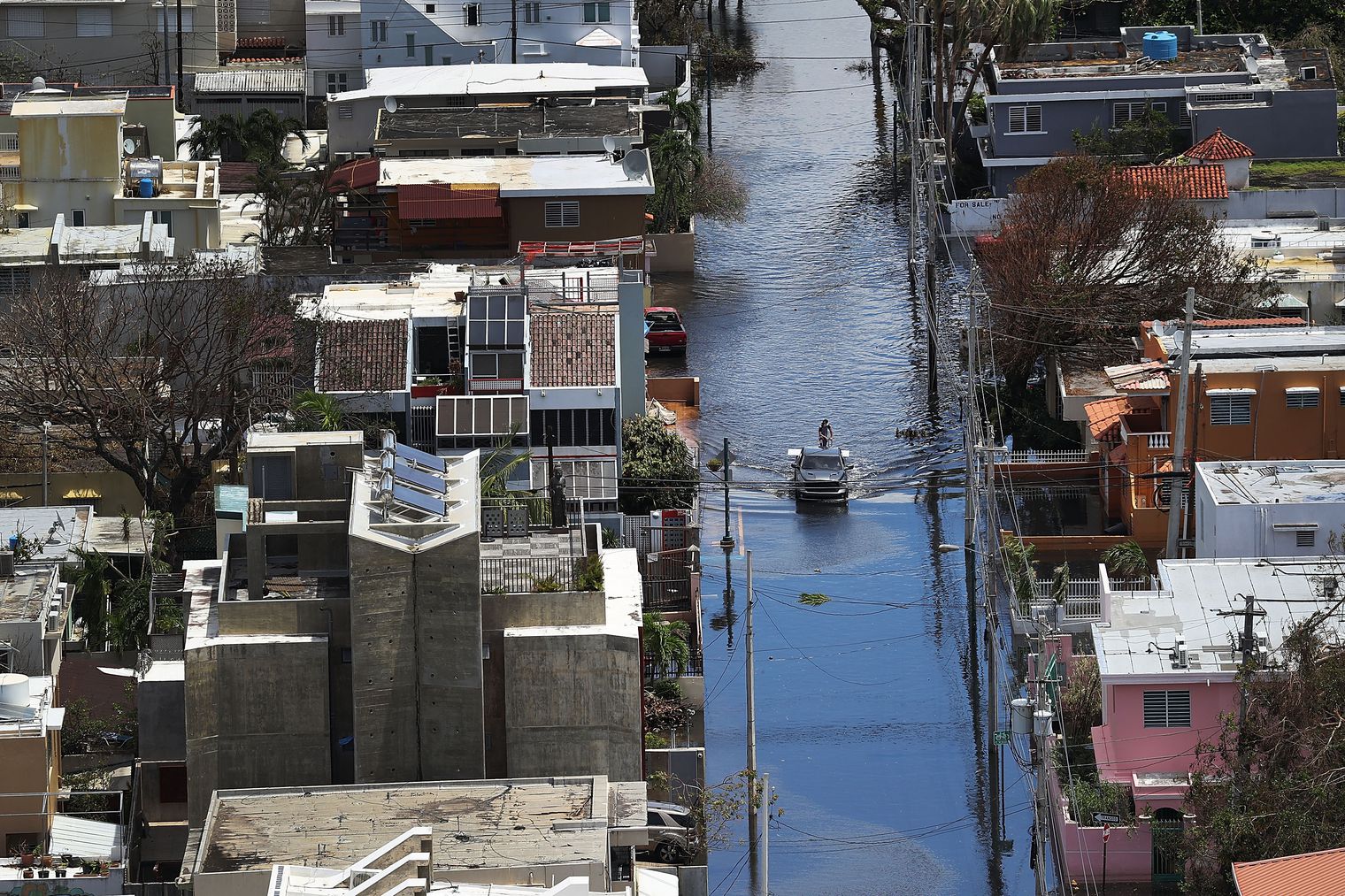 Warmer temperatures are increasing the energy and moisture available to hurricanes...

As Hurricanes Harvey, Irma, and Maria plowed through unusually warm oceans this summer, each one broke records, startling even the scientists who study extreme weather.

“All of these storms went through a period where they gained strength quickly,” said James Kossin, an atmospheric scientist at the NOAA Center for Weather and Climate Prediction. “That was alarming.”

The intensity of Hurricane Maria, which made landfall on Puerto Rico as a Category 4 storm on September 20, was part of why it was so devastating to the island and its weak infrastructure, leaving Puerto Ricans in a humanitarian crisis.

But this year’s intense Atlantic storm season had another element tying its biggest events together: a monstrous, and sometimes deadly, amount of rain.

Images of the flooded metropolises of Houston, Jacksonville, and San Juan with overtopped dams, billowing sewage, and flooded homes show that torrential rain can be one of the most devastating consequences of hurricanes, especially in urban areas where concrete makes it harder for water to drain and where people can drown.

Scientists say the extreme rainfall events that feed these floods are on the rise for many parts of the world, and this year’s hurricanes fit that trend. In particular, rising temperatures in the ocean and the air alongside booming construction in vulnerable areas are fueling the increased risk from massive deluges.

Of the seven hurricanes this year so far, Harvey, Irma, and Maria stand out not just for the amount of rain they dropped, but for how fast they dished it out.

Why hurricanes under warmer conditions can dump so much rain

Downpours go hand in hand with hurricanes, since the cyclones are powered by evaporating and condensing moisture.

Warm ocean waters provide the fuel for hurricanes, and warm air causes the water to evaporate. This moisture-laden air then precipitates as rainfall during a hurricane, dissipating the heat energy from the water.

“Tropical cyclones are very, very good at converging a whole lot of heat in one place at one time,” said Kossin.

Air can hold about 7 percent more water for every degree Celsius increase in temperature, Kossin explained.

That means warmer air and warmer water could lead to larger, more intense hurricanes, which in turn lead to more rainfall. (The Saffir-Simpson scale only accounts for windspeed, but precipitation is closely linked to a storm’s intensity.) Scientists are studying these links to understand how future storms will respond to these conditions.

“Hurricanes live and die by the amount of rainfall they make out of moisture,” said George Huffman, a research meteorologist at NASA Goddard Space Flight Center.

But where that water lands depends on the speed and the course of the storm, and not all areas are equally vulnerable.

“We know that in particular that [the regions around] Houston, Louisiana, and Florida are prone to some of the most extreme precipitation events in the United States,” said Sarah Kapnick, a researcher at NOAA’s Geophysical Fluid Dynamics Laboratory. “We do see signs of precipitation extremes increasing in these regions.”

It’s challenging to make direct comparisons between extreme rainfall events since their weather systems (e.g., hurricanes, thunderstorms) behave differently, so scientists draw on several benchmarks depending on the situation.

These include the peak rate of rainfall, total volume of rain, the three-day average rainfall, and the maximum depth of rainfall. And all of these are separate from flooding, which is governed by local geography and how people use land, in addition to the rates and total amounts of rain.

“There is a difference between a 100-year rain event versus a 100-year flood event,” Kossin pointed out.

Hurricane Harvey hovered over the Gulf Coast in late August and dumped 33 trillion gallons of water on US soil, according to some estimates, and is now the wettest storm in US history.

“When a storm stalls, that has more to do with the larger scale flow fields it’s sitting in,” said Kossin. “That was just very, very bad luck.”

The total volume of rain is easier to calculate when a storm remains over a fixed area, but it much harder to suss out when hurricanes remain mobile and dump water over a wide swath of land and ocean.

NASA’s satellite measurements reported rainfall rates from Harvey as high as 5.8 inches per hour (meteorologists define “heavy rain” as greater than 0.3 inches per hour), while the National Weather Service showed that a ground-based rain gauge in Nederland, Texas, reported 60.58 inches of rainfall, a new record.

Meteorologists still have to vet this number, but if confirmed, it would best the previous record — 52 inches in Hawaii from Hurricane Hiki in 1950 — by 8 inches.

The US Geological Survey reports that flooding causes an average of $6 billion in damages and 140 fatalities each year. And this year was not an average year, with Harvey alone costing upward of $180 billion and killing more than 75.

The waters from flooding can linger for days, causing injuries, spreading disease, and hampering relief efforts. The majority of Harvey’s victims drowned after the storm, while others were delayed from life-saving care. In one case, a woman died from a flesh-eating bacterial infection after falling into the festering Harvey floodwater in her house.

Irma’s peak rain was over Cuba

Hurricane Irma, meanwhile, set a record for its sustained intensity. 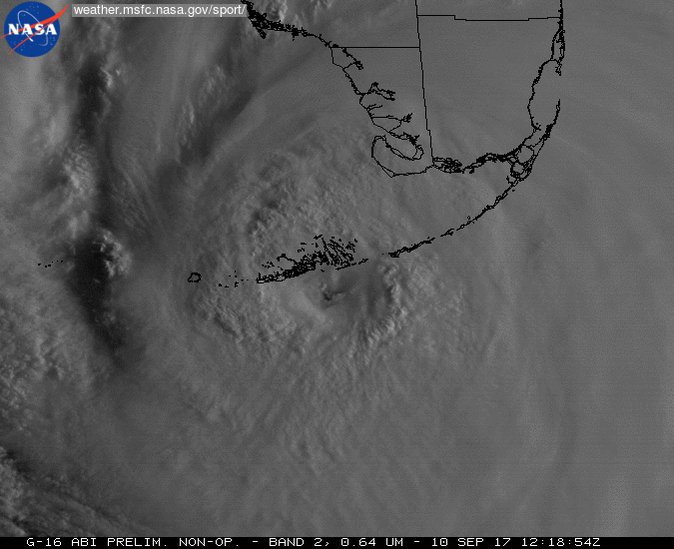 One hour of 30-second #GOES16 vis imagery as Hurricane #Irma made landfall in the Florida Keys as a cat 4 with sustained winds of 130 MPH.

“Irma was a complete standout: 185 mph and stayed there for a day and half,” Kossin said. “These storms do not stay there that long.”

This intensity was matched with a firehose of rain, dumping water at 10.8 inches an hour, reaching depths of 20 inches in Cuba and 15.8 inches in Florida.

The downpour led to flooding from 23 rivers and creeks in Central and North Florida, forcing highways to close. The state reported at least seven deaths from drowning.

With tropical force winds reaching 230 miles from its center, Hurricane Maria completely engulfed Puerto Rico as it bisected the 100-mile wide island, picking up steam again one it was clear.

Satellite measurements already show that it poured as much as 6.44 inches of rain per hour and has left Puerto Rico shrouded in darkness. 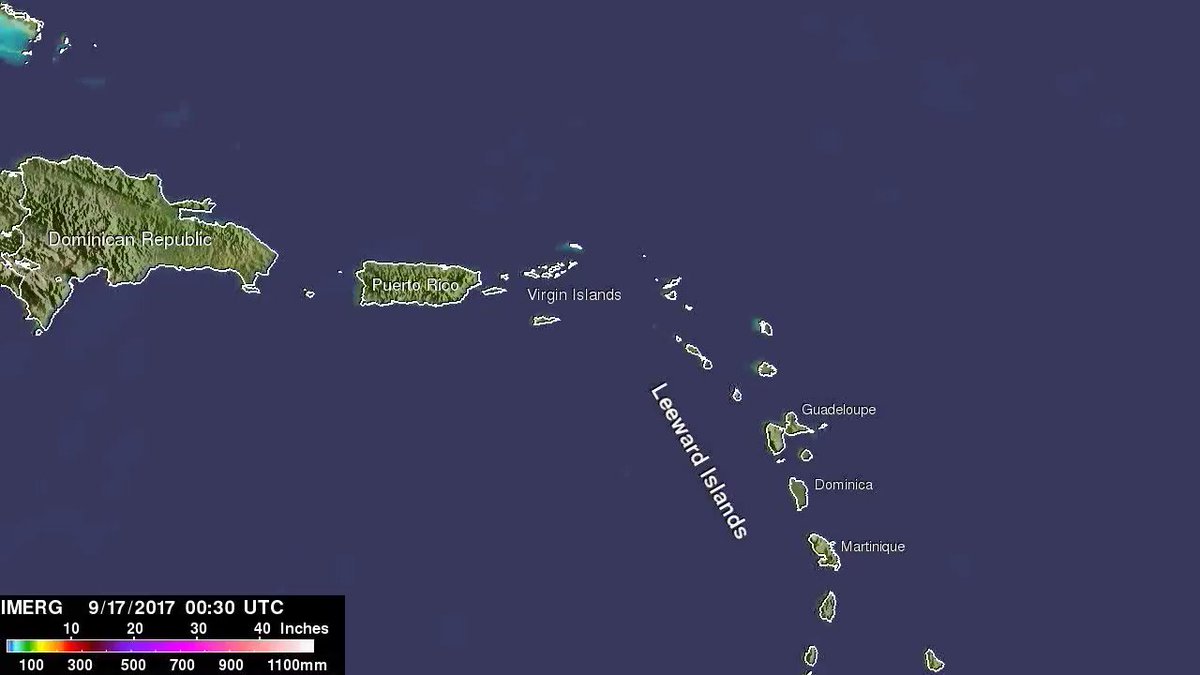 The Cordillera Central mountain range that forms the spine of the island of Puerto Rico acted as a juicer for Hurricane Maria, Huffman explained, rapidly squeezing out 20 to 36 inches of rain from the cyclone.

Perhaps the worst blow from Maria was the 150 mph winds that knocked down 80 percent of the island’s power transmission lines and 85 percent of its cellphone towers, leaving people in the dark and struggling to contact each other. But the flooding from rainfall has been a hazard too, including threatening to breach Guajataca Dam in the Western part of the island, forcing hundreds to evacuate.

At least 18 fatalities have been reported in Puerto Rico so far, including two police officers who drowned.

The climate signal in deluges like these is emerging

No single weather event — even an extreme one — can be “caused” by climate change, as Vox’s David Roberts has explained in detail. And when talking about hurricanes, researchers are quite hesitant to even estimate how much climate change is to blame. Huffman said he’s not yet sure if this storm season is “unprecedented” in its ferocity.

However, rising average temperatures are definitely an important element of huge storms like Harvey, Irma, and Maria.

Warmer temperatures are driving sea level rise, which is increasing risks from the storm surges that often herald hurricanes.

Increasing heat is also warming up the ocean, and hotter air holds onto more moisture, increasing the available energy for hurricanes.

And independent of cyclones, extreme rainfall events are on the rise.

Kapnick noted that even individual rain storms can be overwhelming, like storm that drenched Baton Rouge last year with 31.39 inches of rain and three times the volume of water of Hurricane Katrina throughout Louisiana in 2005.

As the chart below shows, the amount of rain from a once-in-every-30-years rainstorm like the one that immersed Baton Rouge has gone up due to warming:

And scientists are getting better at figuring out when the torrential downpours are coming.

“If you pay attention, we’ve had a really remarkable series of forecasts,” said Huffman. “For Irma, we knew four to five days in advance that there would be a sharp right turn. Twenty years ago, you wouldn’t have dreamed of doing that.”

“Everything we see is consistent with what we expect climate change to do,” Kossin said.

Huffman explained that researchers aim to combine different instruments to get a robust handle on rainfall.

“The gold standard is rain gauges because they physically collect the rain,” said Huffman.

The next option is ground-based radar, which covers a wider swath of the weather than rain gauges, but less directly measures rain.

But take a look at what happened to a weather radar station in Puerto Rico:

Wow, this is TJUA San Juan, Puerto Rico radar back in March, and now after Hurricane Maria. Incredible. Recent photo courtesy of @NWSSanJuan

This illustrates part of the challenge of attaching numbers to extreme weather events. Many of the systems used to track them are also vulnerable to them, leaving only indirect figures and estimates.

What’s more, both rain gauges and ground-based radar have limited ranges, leaving vast stretches of ocean where hurricanes spend most of their existence unmeasured. And when a hurricane does make landfall, gales can knock them down.

“We don’t really have anything on the surface [of the ocean] to tell us the details,” said Huffman. “When the chips are really down, sometimes satellites are the only choice.”

That means the full accounting for the rainfall from Harvey, Irma, and Maria could take months to deliver as meteorologists piece together their models with the measurements they have.

However, scientists are eagerly waiting for the dust to settle so they can confirm their suspicions about the record-breaking storms this year. The American Geophysical Union added a last-minute session for researchers to present their findings on Harvey and Irma at their December meeting.

“There’s going to be a tremendous amount of research coming out in the next few months,” Kapnick said.