ONE U.S. ISLAND PEOPLE LIVED ON DISAPPEARED RIGHT INTO THE OCEAN. ANOTHER ONE IS ON ITS WAY... 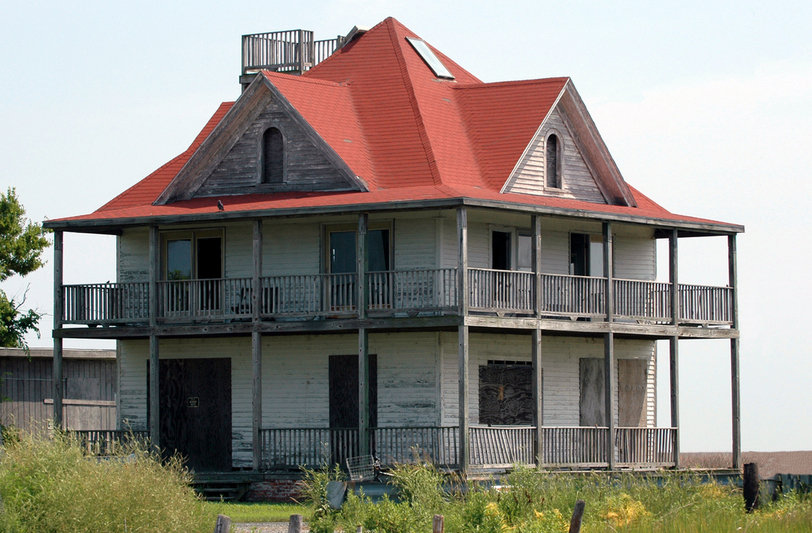 Can Smith Island be saved?

This is a part of a special Upworthy series made possible by the Natural Resources Defense Council. Read more.

In 2010, the last remaining house on this Maryland barrier island toppled into the Atlantic Ocean.

A final glimpse before the ocean swallowed up the last remaining vestige of Holland Island. Image by Baldeaglebluff/Flickr.

Holland Island, once located in the Chesapeake Bay, had known this was coming. Rising tides and wind forced the island's residents, once numbering up to 360, to seek drier ground on Maryland's mainland between 1914 and 1922. The house seen in the picture no longer remains in place. It's been enveloped into the surrounding waters, dismantled by a storm in October 2010.

A similar story is in progress with nearby Smith Island right now.

It's not far from where Holland Island once existed, and it's the last remaining inhabited offshore island (inaccessible by car) in Maryland's waters of the Chesapeake Bay.

A report from 2008 forecasts an identical fate — that by the year 2100, the island will be "almost completely under water as the Bay's average level goes up nearly one-foot."

A once-grand home on Smith Island now seems to be waiting for time and the elements to take it. Image by Lee Cannon/Flickr.

That's why the state is trying to buy people out of their land and relocate them to the mainland.

Only a small fraction of Smith Island residents accepted the offer, though. Many of the 276 who remain seem to believe the rising tide predictions are horse-hooey. From a Newsweek interview with resident Tim Marshall:

"'The whole sea-level rise — it's BS,' he says, talking loudly over the boat's motor. 'I've lived here my whole life and haven't seen a difference.'"

But glacial melting is a bona fide fact that says otherwise.

Experts illustrate this expected rise with an image of nearby Deal Island (connected to Maryland's mainland by a bridge):

The red line depicts the approximate level of flooding if a Category 2 hurricane were to hit in the year 2100 (factoring in rising sea level plus the size of waves). Photo via "Rising Sea Level Guidance"/Maryland Department of Natural Resources.

Here's the thing: Global warming isn't coming just for these unfortunate residents. They're just on the front end of the timeline. From the Natural Resources Defense Council:

"Scientists at the U.S. Center for Atmospheric Research predict that if the current rate of global warming continues, the Arctic could be ice-free in the summer by 2040."

If the ice caps continue melting at such an increased pace, it could mean the sea levels rising by 10 inches to 23 inches everywhere by the year 2100 (reminder — that's only 85ish years from now). The Gulf Coast, the state of Florida, and the whole Atlantic seaboard would be gone.

What prompts residents to hold fast to these islands in spite of the dire writing on the wall?

The small-town way of life, the remote and peaceful surroundings minimally touched by the modernization happening in the rest of the world, and generations of family ties are all some of the reasons residents might be holding on so tight. It must come down to love, right? Love of their lifestyle and love for the legacy of such a special place.

Love won't stop the sea level from rising. Love won't stop time from ravaging Smith Island just the way Holland Island was forced to succumb to the reality of global warming. So residents need to hear the facts, but environmentalists and government folks also need to hear the community perspective, including our calls for them to take action before local situations get this bad. Eventually everyone will leave the island — that's not optional, it's GOING to happen — but in the meantime, an open conversation could be the best way to help get people engaged and planning for their futures.