OP ED: THE WHITE HOUSE SEES ONLY DOLLAR SIGNS IN THE ARCTIC... 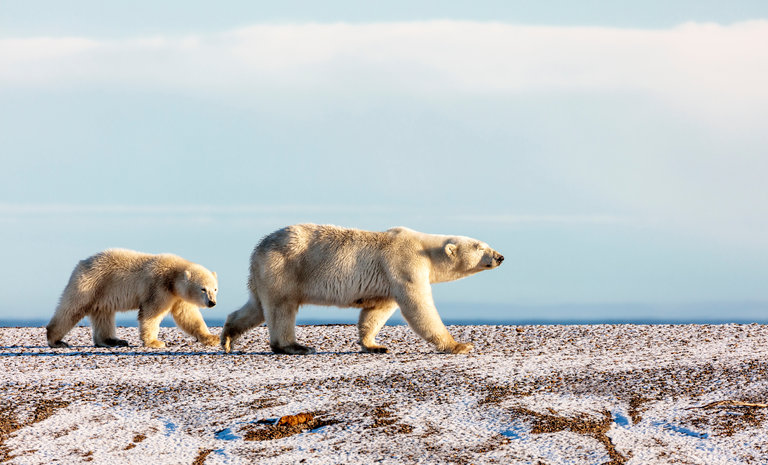 A polar bear with her cub in the Arctic National Wildlife Refuge. Credit National Geographic Creative

Alaska is “open for business!” With these words, delivered before an appreciative audience of oil producers in Anchorage in May, Interior Secretary Ryan Zinke reaffirmed the Trump administration’s determination to open Alaska’s fragile environment to commercial exploitation. Here are the particulars of that assault, at least so far:

In April, President Trump signed an order that to allow oil drilling in United States waters in the Arctic Ocean that President Barack Obama had declared off limits. In May, Mr. Zinke made clear his plan to reverse the Obama administration’s decision to protect environmentally delicate areas of the National Petroleum Reserve. Also in May, the Environmental Protection Agency administrator, Scott Pruitt, always eager to join in the environmental mayhem, reversed an Obama policy that had blocked a proposed gold mine in the headwaters of Bristol Bay, one of the most productive wild salmon fisheries. Mr. Pruitt made the decision after meeting with the chief executive of the mining company.

But wait — there’s more. As early as Thursday, with Mr. Zinke and the rest of the administration cheering from the sidelines, the Senate could vote on opening the Arctic National Wildlife Refuge’s oil-rich coastal plain for drilling. Unlike the rest of the 19.6-million-acre refuge, mostly protected since its creation under President Dwight Eisenhower, the fate of the 1.5-million-acre plain — the refuge’s biological heart — is up to Congress.

Congress has twice come within a hair of consigning the coastal plain and its abundant wildlife to the drillers — in 1995, when President Bill Clinton vetoed a budget bill that contained a drilling provision, and in 2005, when moderate Republicans in the House rose up against a similar plan. This time the threat comes wrapped in a giant budget package that, without mentioning the coastal plain explicitly, instructs the Senate Energy and Natural Resources Committee to find $1 billion in revenue to offset the bill’s giant tax cuts. This invites the committee chairwoman, Lisa Murkowski, an Alaska Republican, to write language in the budget legislation to allow development.

Assuming that Senate Democrats mobilized by Ed Markey of Massachusetts hold firm, only a few Republicans are needed to block this maneuver. Senators John McCain of Arizona and Susan Collins of Maine have voted against drilling in the refuge before; it would be astonishing if they did not do so again. It should not be hard to find at least one more who sees this bill for what it is — a budget scam that puts the wildest place left in America at risk.