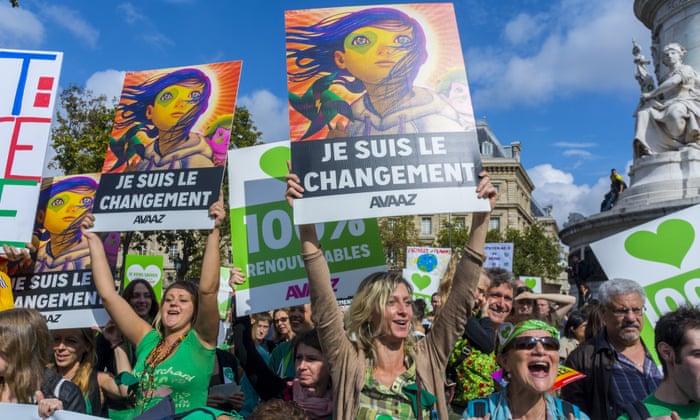 People around the world should protest ‘on behalf of those who can’t’, say organisers of climate march forbidden in light of Paris terror attacks...

A march expected to attract 200,000 people onto the streets of Paris ahead of crunch UN climate change talks was forbidden by the French government on Wednesday in light of last Friday’s terror attacks.

But organizers have said it is now even more important for people around the world to come out onto the streets for “the biggest global climate march in history” to protest “on behalf of those who can’t”.

There are 2,173 events organized in more than 150 countries around the world on 28 and 29 November. You can find your nearest event here:

The events are designed to put pressure on the leaders from almost 200 countries who will meet in Paris to thrash out a new deal on limiting greenhouse gas emissions post-2020. The conference is considered the most significant since the talks in Copenhagen in 2009, which were widely considered a failure by environmentalists.

Emma Ruby-Sachs, deputy director of Avaaz , which has organised the march said: “The tragic attacks in Paris have made the march there impossible. Now it’s even more important for people everywhere to march on the weekend of 29 November on behalf of those who can’t, and show that we are more determined than ever to meet the challenges facing humanity with hope, not fear.”

From Kazakhstan to Chile, people are expected to gather across six continents with organisers hoping the numbers will still top the People’s Climate March last year when nearly 700,000 people took to the streets around the world, although they say that numbers will be weather dependent.

The largest march is expected to take place in London, where designer Vivienne Westwood, actor Vanessa Redgrave and musicians Charlotte Church, Peter Gabriel and Kate Tempest have pledged to turn out. Demonstrations are expected across Europe, including a colourful parade in Amsterdam and marches in Madrid and Berlin where protesters will call for the end of coal.

In Alaska in the US, protesters will hike up to a wind turbine on a local mountain while in Melbourne, Australia, people will gather outside the state library, joined by a choir. In Tanzania, 1,000 Maasai are expected to gather and march in Loliondo on the border of the Serengeti national park.

The focus of activity in India will be in New Delhi, but other events featuring yoga, bicycles and walking will take place in seven other cities. Demonstrations led by celebrities and local leaders will end with a concert in Kampala, Uganda’s capital, while in Brazil people will march down Paulista Avenue in central São Paulo.

The world’s scientists have warned that rising emissions created by humans are causing temperatures to rise around the globe. World leaders have agreed it is essential to limit warming to a 2C rise above pre-industrial levels to avoid triggering potentially catastrophic and irreversible impacts, but on current trends the world is likely to warm by twice that amount by the end of the century.

Leaders have expressed hope for progress at Paris after the majority of countries around the world submitted voluntary pledges and measures to reduce their own emissions ahead of this year’s talks, as opposed to the UN imposing top-down targets. But many others have signalled that the fate of the talks will rest on the relationship between developed and developing countries, which have been promised a $100bn-a-year package by 2020 to support them to make the transition to a clean economy.