OUR SELECTIVE BLINDNESS IS LETHAL TO THE LIVING WORLD... 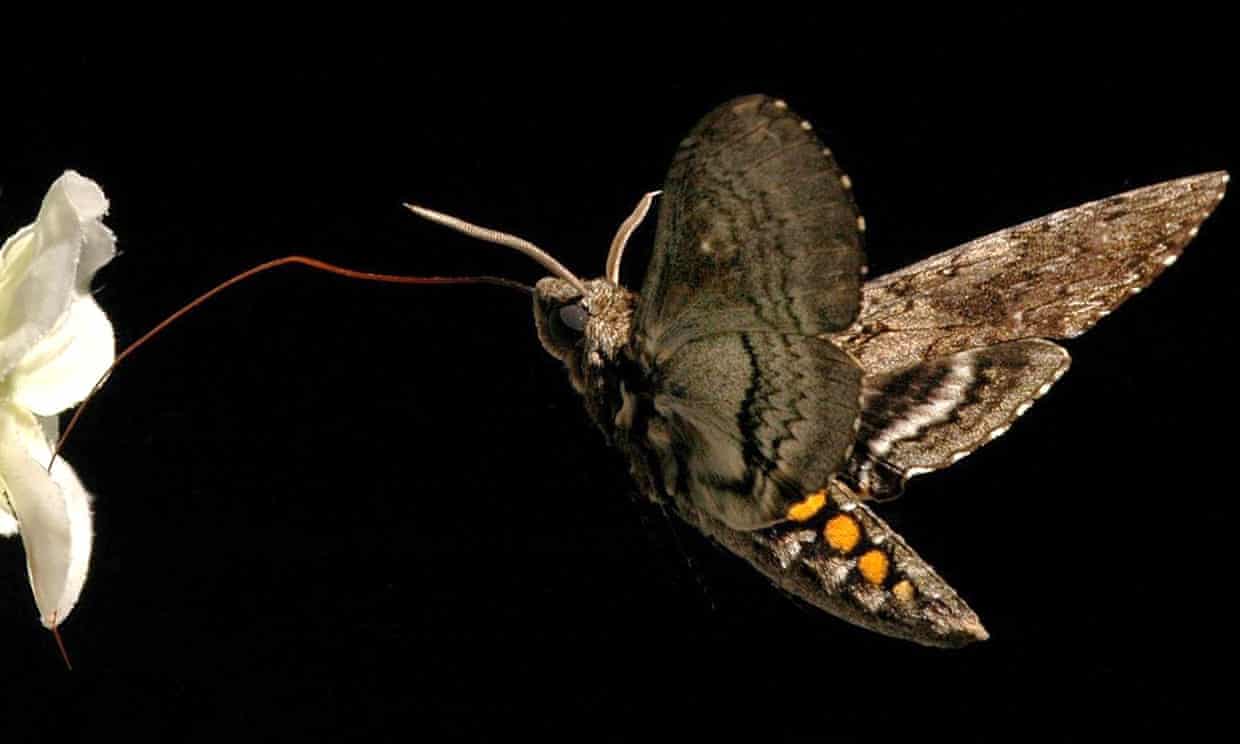 Each generation is normalising the erosion of our environment, and the devastating losses to fragile ecosystems mount up...

What you see is not what others see. We inhabit parallel worlds of perception, bounded by our interests and experience. What is obvious to some is invisible to others. I might find myself standing, transfixed, by the roadside, watching a sparrowhawk hunting among the bushes, astonished that other people could ignore it. But they might just as well be wondering how I could have failed to notice the new V6 Pentastar Sahara that just drove past.

As the psychologist Richard Wiseman points out: “At any one moment, your eyes and brain only have the processing power to look at a very small part of your surroundings … your brain quickly identifies what it considers to be the most significant aspects of your surroundings, and focuses almost all of its attention on these elements.” Everything else remains unseen.

Animal agriculture is choking the ​Earth and making us sick. We must act now...

Our selective blindness is lethal to the living world. Joni Mitchell’s claim that “you don’t know what you’ve got till it’s gone” is, sadly, untrue: our collective memory is wiped clean by ecological loss. One of the most important concepts defining our relationship to the natural world is shifting baseline syndrome, coined by the fisheries biologist Daniel Pauly. The people of each generation perceive the state of the ecosystems they encountered in their childhood as normal and natural. When wildlife is depleted, we might notice the loss, but we are unaware that the baseline by which we judge the decline is in fact a state of extreme depletion.

So we forget that the default state of almost all ecosystems – on land and at sea – is domination by a megafauna. We are unaware that there is something deeply weird about British waters; they are not thronged with great whales, vast shoals of bluefin tuna, two-metre cod and halibut the size of doors, as they were until a few centuries ago. We are unaware that the absence of elephants, rhinos, lions, scimitar cats, hyenas and hippos, that lived in this country during the last interglacial period (when the climate was almost identical to today’s), is also an artefact of human activity.

And the erosion continues. Few people younger than me know that it was once normal to see fields white with mushrooms, or rivers black with eels at the autumn equinox, or that every patch of nettles was once reamed by caterpillars. I can picture a moment at which the birds stop singing, and people wake up and make breakfast and go to work without noticing that anything has changed.

Conversely, the darkness in which we live ensures that we don’t know what we have, even while it exists. Blue Planet II revealed the complex social lives and remarkable intelligences of species we treat as nothing but seafood (a point it failed to drive home, in its profoundly disappointing final episode). If we were aware of the destruction we commission with our routine purchases of fish, would we not radically change our buying habits? But the infrastructure of marketing and media helps us not to see, not to think, not to connect our spots of perception to create a moral world view upon which we can act. 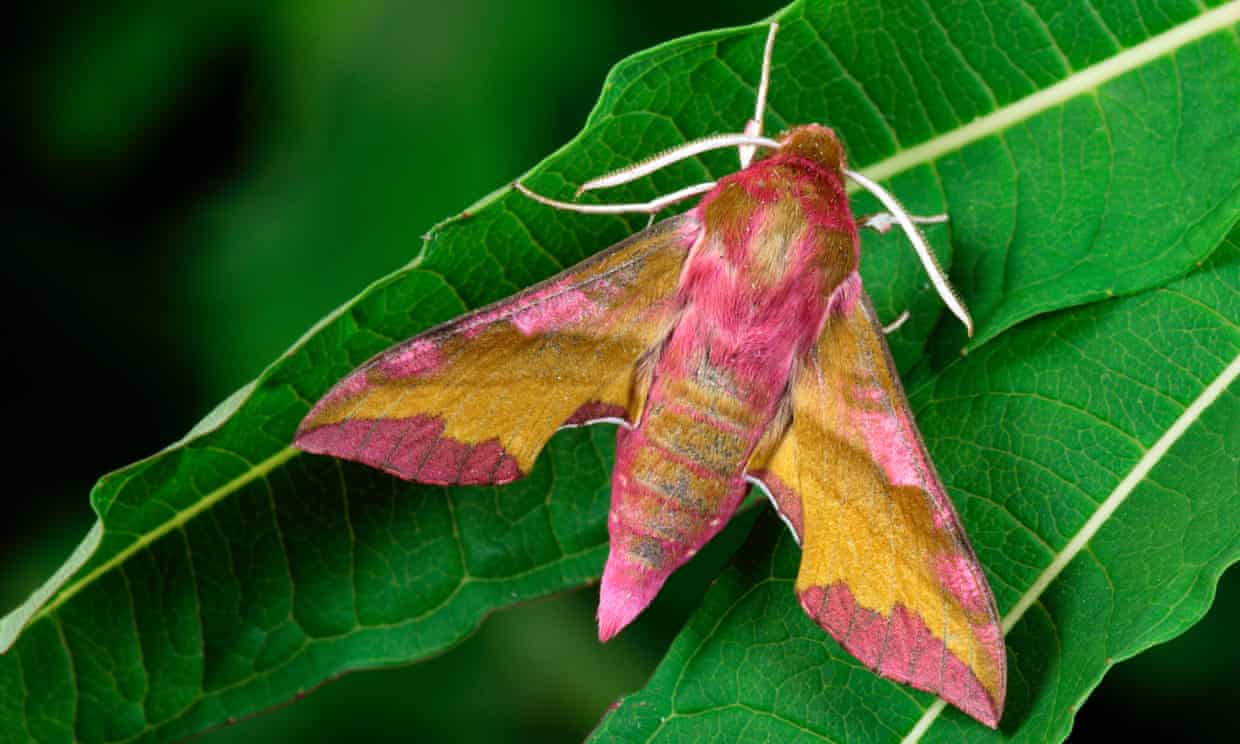 ‘When they opened the trap, I was astonished by the range and beauty of their catch. There were pink and olive elephant hawkmoths.’ Photograph: Alamy

Most people subconsciously collaborate in this evasion. It protects them from either grief or cognitive dissonance. To be aware of the wonder and enchantment of the world, its astonishing creatures and complex interactions, and to be aware simultaneously of the remarkably rapid destruction of almost every living system, is to take on a burden of grief that is almost unbearable. This is what the great conservationist Aldo Leopold meant when he wrote: “One of the penalties of an ecological education is that one lives alone in a world of wounds.”

In June, this year, a powerful light – 125 watts to be precise – was shone into a corner of my own darkness. Two naturalists from Flanders, Bart Van Camp and Rollin Verlinde, asked if they could come to our tiny urban garden and set up a light trap. The results were a revelation. I had come to see the garden – despite our best efforts – as almost dead: butterflies and beetles are rare sights here. But when Bart and Rollin showed us the moths they had caught, I realised that what we see does not equate to what there is. There are 59 species of butterfly in the UK, but 2,500 species of moth, and our failure to apprehend the ecology of darkness limits our understanding of the living world.

When they opened the trap, I was astonished by the range and beauty of their catch. There were pink and olive elephant hawkmoths; a pine hawkmoth, feathered and ashy; a buff arches, patterned and gilded like the back of a barn owl; flame moths in polished brass; the yellow kites of swallow-tailed moths; common emeralds the colour of a northern sea, with streaks of foam; grey daggers; a pebble prominent; heart and darts; coronets; riband waves; willow beauties; an elder pearl; small magpie; double-striped pug; rosy tabby. The names testify to a rich relationship between these creatures and those who love them.

Altogether, there were 217 moths of 50 species. This, Van Camp and Verlinde told me, was roughly what they had expected to find. Twenty-five years ago, there would have been far more. A food web is collapsing, probably through a combination of pesticides, habitat destruction and light pollution, and we are scarcely aware of its existence.

Mass starvation is humanity’s fate if we keep flogging the land to death...

Moths evolved about 190 million years ago. Butterflies are a relatively recent development, diverging 140 million years later. Most explanations for this split focus on the spread of flowering plants. But might it have more to do with the fact that bats developed echo-location, which allows them to detect their prey, at roughly that time? Could the diurnal butterfly have been a response to a deadly adaptation by the nocturnal moth’s main predator?

Every summer night, an unseen drama unfolds over our gardens, as moths, whose ears are tuned to the echo-locating sounds bats make, drop like stones out of the sky to avoid predation. Some tiger moths have evolved to jam bat sonar, by producing ultra-sonic clicks of their own. We destroy the wonders of the unseen world before we appreciate them.

That morning I became a better naturalist, and a better conservationist. I began to look more closely, to seek the unseen, to consider what lies beneath. And to realise just how much there is to lose.