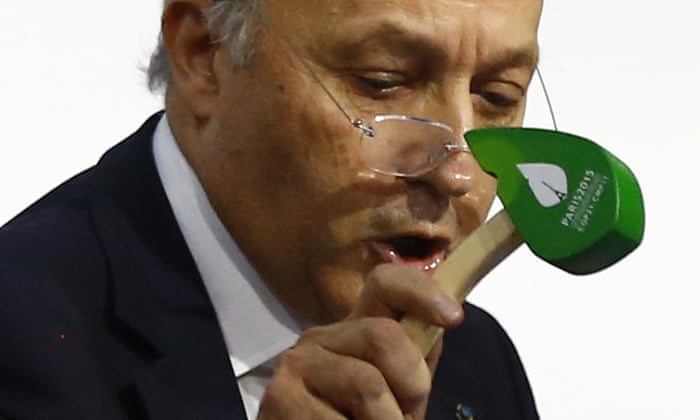 French foreign minister and president of the talks Laurent Fabius brings down the gavel to mark the adoption of the agreement. Photograph: Francois Mori/AP

Two decades of talks have come to this: an ambitious agreement to hold states to emissions targets – but already low-lying countries are worried...

Governments have signaled an end to the fossil fuel era, committing for the first time to a universal agreement to cut greenhouse gas emissions and to avoid the most dangerous effects of climate change.

After 20 years of fraught meetings, including the past two weeks spent in an exhibition hall on the outskirts of Paris, negotiators from nearly 200 countries signed on to a legal agreement on Saturday evening that set ambitious goals to limit temperature rises and to hold governments to account for reaching those targets.

Government and business leaders said the agreement, which set a new goal to reach net zero emissions in the second half of the century, sent a powerful signal to global markets, hastening the transition away from fossil fuels and to a clean energy economy.

The deal was carefully constructed to carry legal force but without requiring approval by the US Congress - which would have almost certainly rejected it.

After last-minute delays, caused by typos, mistranslations and disagreements over a single verb in the highly complicated legal text, Laurent Fabius, the French foreign minister, brought down a special leaf-shaped gavel to adopt the agreement. The hall erupted in applause and cheers. “It is a small gavel but I think it can do a great job,” Fabius said.

The goal of 1.5C is a big leap below the 2C agreed six years ago in Copenhagen. Here’s what the agreement means for global emissions and the future of the planet
Read more

François Hollande, the French president, who had invested enormous capital and diplomatic effort in shepherding the agreement, said countries had a rare chance to make history. “We are at a decisive point in time,” he said.

Fabius: ‘The world is counting on Paris climate talks’

Fabius said: “It is my deep conviction that we have come up with an ambitious and balanced agreement. Today it is a moment of truth.”

The agreement was equally a victory for the United Nations, which spent four years overcoming political inertia and the deep divisions between rich and poor countries, to put together the ambitious deal. “I used to say: we must, we can, we will,” Christiana Figueres, the UN climate chief who guided the talks, tweeted. “Today we can say we did.”

The US president, Barack Obama, hailed the agreement as “a tribute to strong, principled American leadership” and a vital step in ensuring the future of the planet.

“This agreement represents the best chance we have to save the one planet that we’ve got,” he said, but added that the deal “was not perfect. The problem’s not solved because of this accord.”

“This was the last chance [for the UN process],” he added, “and we have taken it.”

Al Gore, the former US vice-president who helped draft the 1997 Kyoto climate treaty, was in the hall. He appeared visibly moved when the agreement was gavelled in and said the accord would have a powerful effect on the economy.

“This universal and ambitious agreement sends a clear signal to governments, businesses, and investors everywhere: the transformation of our global economy from one fuelled by dirty energy to one fuelled by sustainable economic growth is now firmly and inevitably underway,” Gore said in a statement.

Six years after the chaotic ending of the Copenhagen climate summit, the agreement now known as the Paris Agreement for the first time commits rich countries, rising economies and some of the poorest countries to work together to curb emissions.

Rich countries agreed to raise $100bn (£66bn) a year by 2020 to help poor countries transform their economies. The overall agreement is legally binding, but some elements – including the pledges to curb emissions by individual countries and the climate finance elements – are not.

The deal was also hailed for delivering a clear message to business leaders. The International Investors Group on Climate Change, a network managing €13tn of assets, said the decision would help trigger a shift away from fossil fuels and encourage greater investments in renewable energy.

“Investors across Europe will now have the confidence to do much more to address the risks arising from high carbon assets and to seek opportunities linked to the low carbon transition already transforming the world’s energy system and infrastructure,” the group said.

Jennifer Morgan, of the environmental thinktank, the World Resources Institute, said the long term goal was “transformational” and “sends signals into the heart of the markets”.

The deal set a high aspirational goal to limit warming below 2C and strive to keep temperatures at 1.5C above pre-industrial levels – a far more ambitious target than expected, and a key demand of vulnerable countries.

It incorporates commitments from 187 countries to reduce emissions, which on their own would only hold warming to between 2.7C and 3C. 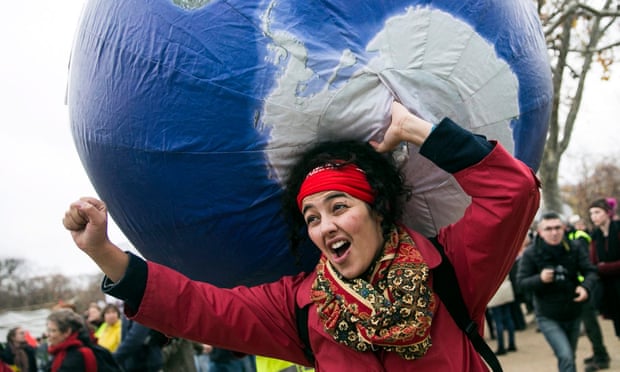 A climate demonstrator in Paris on Saturday. Photograph: Etienne Laurent/EPA

But it sets out procedures for review at regular intervals to deepen emissions cuts, with countries aiming to peak global greenhouse gas emissions as soon as possible, and then rapidly scale down in the second half of this century.

Critics said the agreement would still condemn hundreds of million of people living in low-lying coastal areas and small islands, after US negotiators demanded the exclusion of language that could allow the agreement to be used to claim legal liability for climate change. But supporters said the negotiations took a significant step forward in getting countries to act together on a global challenge of immense complexity.

Saturday’s agreement was the product of years of preparation, two weeks of intense negotiations, capped off by three sleepless nights, with Barack Obama and Hollande phoning other leaders to bring them on side with the deal.

Accounts from behind the closed doors of negotiating session described tense exchanges between oil-producing countries, such as Saudi Arabia and Russia, and a rapidly constituted US- and Europe-backed High Ambition Coalition, which kept up the pressure for a strong temperature goal and regular reviews of emission-cutting plans.

The French hosts also won praise from negotiators for using a mixture of informal huddles, or indabas, and traditional shuttle diplomacy to bring the deal home.

The text commits countries to peak greenhouse gas emissions as soon as possible, and to seek a balance between human-caused emissions and removals by carbon sinks.

“This means bringing down greenhouse gas emissions to net zero within a few decades,” said John Schellnhuber, director of the Potsdam Institute for Climate Impact Research, and a climate adviser to the Vatican.

But he added that countries would have to move aggressively, peaking before 2030 and eliminating emissions by 2050 through reforestation and technologies such as carbon capture and storage.

For vulnerable countries, the high ambition of the 1.5C goal was offset by the weakening of the agreement when it came to dealing with irreparable damage of climate change.

“The idea of even discussing loss and damage now or in the future was off limits. The Americans told us it would kill the COP,” said Leisha Beardmore, the chief negotiator for the Seychelles. “They have always been telling us: ‘Don’t even say that’.”

Even so, campaign groups were broadly positive about the outcome. Given intense pressure from oil-producing countries, negotiators managed to craft a text that was far more ambitious than expected.

The universal nature of the agreement was a radical departure from the Kyoto Protocol, the 1997 agreement that drew sharp divisions between the obligations of wealthy and developing countries but ultimately failed to lower emissions.

Unlike Kyoto, the agreement reached on Saturday depends on political will, with countries setting their own climate action plans.

Rich countries promised that by 2025 they would set a new goal for climate finance “from a floor of $100bn per year”, the figure first pledged at the Copenhagen climate talks six years ago. However, the commitment was offered as a non-binding decision that accompanied the binding text.

All the countries agreed on demands from the US and European Union for five-year reviews of their emissions reductions – an exercise that had been resisted by China.