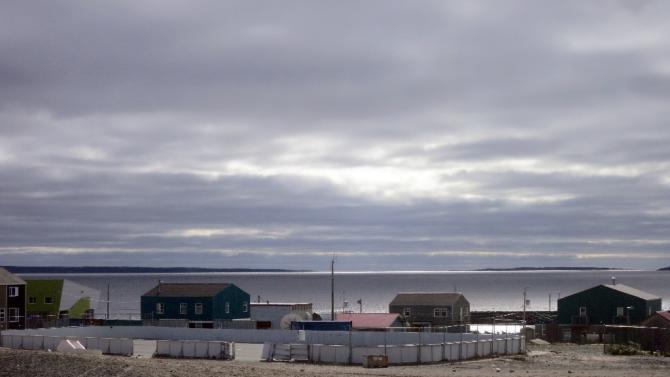 On the rolling landscape of shrubs and moss around Hudson Bay, they probe the once impenetrable ground now thawing in places due to global warming.

Teams are measuring the soil's carbon content, temperature, pace of melt and the resulting release of once-trapped greenhouse gases.

"There is twice as much carbon in permafrost than in the atmosphere," said Florent Domine, a researcher with France's National Centre for Scientific Research (CNRS).

"So if we transformed all the carbon in the permafrost into CO2, we would triple the concentration of CO2 in the atmosphere, and that would mean the end of the world as we know it."

Permafrost is perennially frozen ground covering about a quarter of exposed land in the northern hemisphere.

It contains an estimated 1.7 trillion tonnes of carbon in the form of frozen organic matter, which escapes as carbon dioxide (CO2) and methane as it warms and decomposes. 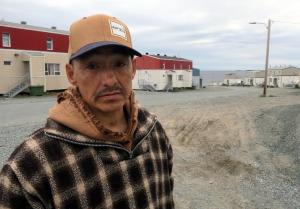 Lucassie Cookie, a local, poses for a photograph in the Inuit village of Umiujaq, in Nunavik territory

Releasing the carbon threatens to unleash a vicious cycle in Earth's global warming problem -- adding to the greenhouse gases in the atmosphere, which in turn will spur further warming and ice melt.

"People have called it a climate time bomb, because of the danger of a rapid release of gas from the permafrost," said Domine.

But in a brand-new field of research, the picture today is fuzzy: scientists do not know whether we risk a major release of most of the CO2 and methane, or a slow, small leak.

"We have to quantify these processes to evaluate the risk," Domine explained.

For two years, Domine and a team have been monitoring the slow transformation of the once rock-hard ground in Canada's furthest northern to mush.

They use sensors to monitor temperature, humidity and albedo -- a measure of light reflectivity which is highest in the frozen areas of the world.

The team conducts its experiments in a variety of locations, including a boreal forest and the isolated islands of Ward Hunt and Bylot off the Canadian north coast. 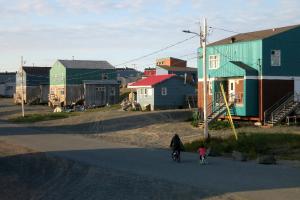 A street in the Inuit village of Umiujaq, in Nunavik territory, Hudson Bay, Quebec (AFP Photo/Cather …

Climate change is warming the Arctic and sub-Arctic regions at more than double the global average, making these areas windows into the types of impacts global warming is likely to have.

A top priority is to determine what kind of gas escapes as the permafrost thaws -- and how much of it.

"Will the bacteria set free essentially be CO2? Or methane, which has an even greater warming effect?" asked Domine, a snow specialist.

Carbon dioxide or CO2 is the most abundant greenhouse gas blamed for global warming, but methane is much more potent at trapping heat.

Impacts of the thaw are already visible.

Millions of ponds of different sizes have formed, scattered over the Arctic region, as the receding permafrost collapses unevenly in on itself. 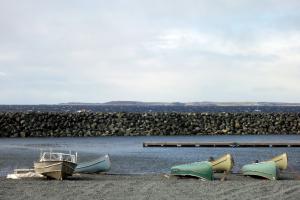 Canoes and boats lying at the waters edge in the Inuit village of Umiujaq, in Nunavik territory, Hud …

Any hollows quickly fill with melted ice and rainwater.

"About 10 to 100 times more CO2 escapes from the ponds than from the soil," said Maria Belke-Bria, a doctoral student on Domine's team.

The moisture speeds up decomposition of the now-exposed organic material.

But at the same time, the melt has created small valleys in the once barren ground, where spruces and dwarf birch trees now flourish. Plants absorb carbon dioxide.

"We want to know if this new vegetation... protects the permafrost or is hastening its melt," said Belke-Bria.

Scientists do not yet know whether the net effect will be one of cooling or warming.

In fact, the entire field of study remains shrouded in uncertainty, and permafrost's potential contribution to planet warming is not included in future projections of climate change.

The UN's climate science panel also did not quantify the risk from permafrost thaw in its latest, seminal global warming report.

Part of the problem is that this is such a challenging and expensive phenomenon to study -- not least because the region is remote and hard to reach, and the pockets of research funders empty.

But Domine insisted: "we cannot ignore this question."

What is clear is that there will be no "local" solution to the problem, he stressed.

"We cannot capture carbon escaping over a surface of 10 million square kilometres," stated the researcher.

"Stopping global warming is the only answer."