Devastating downpour, caused by high ocean temperatures, could not have been predicted, president said, months after state of emergency declared for wildfires...

Sixty-seven people have been killed and thousands more forced to evacuate by intense rains which damaged 115,000 homes and destroyed more than 100 bridges in Peru’s worst floods in recent memory.

“We are confronting a serious climatic problem,” said Peru’s president, Pedro Pablo Kuczynski, in a broadcast to the nation on Friday afternoon. “There hasn’t been an incident of this strength along the coast of Peru since 1998.”

The disaster – which came after a period of severe drought – has been blamed on abnormally high temperatures in the Pacific Ocean, and fuelled criticism that the country is ill-prepared for the growing challenges of climate change.

Over the past three days, the downpour has burst river banks, created mudslides, collapsed bridges, closed roads and forced school suspensions in swaths of the west and north of the country.

Rains continued to lash the northern Piura region where streets remained flooded in the regional capital and homes had been washed away in poorer neighbourhoods.

By Thursday night, the floodwaters had subsided in the city’s La Primavera slum, but the floor of Shirley Moran’s home was a sea of dried mud and half-buried children’s toys.

“The water came up to our knees, the only thing we could do was run for our lives and to try and keep calm,” said Moran in the battered home she shared with five siblings.

Even the capital city, Lima, where a desert climate means that rain is rare, was lashed by a downpour which flooded outlying neighbourhoods.

Hotel collapses into river after torrential rain in Peru

With temperatures still high, the meteorological agency expects the rain front to move inland and south over the coming days and has issued a highest-level weather warning for the Amazon part of the Cusco, Ucayali and Huánuco regions.

It is not the first time this year that Peru has been affected. Two months ago, tourists in Machu Picchu were stranded by mudslides and had to be airlifted.

Abraham Levy, a Peruvian meteorologist, said the weather conditions were “extremely unusual” and the storms and flooding were caused by the “atypical” warming of sea surface temperatures off Peru’s northern coast by five to six degrees to 29C.

He described the phenomenon as a “coastal El Niño”. The last time this was seen was nearly a century ago in 1925.

“We’ve had these kinds of El Niños as long as we have historical data, so it’s very difficult to link climate change or even global warming to these events,” he said.

Other scientists say a global trend of rising sea temperatures was likely to have contributed to the recent storms. 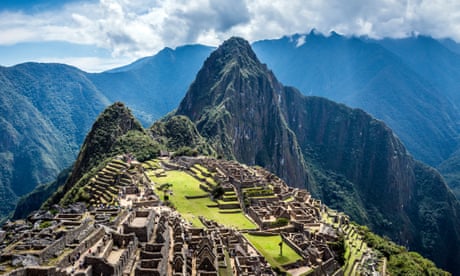 In November Peru declared a state of emergency when wildfires tore through drought-stricken areas burning nearly 12,000 hectares (30,000 acres) of land.

Scientists accused Peruvian authorities of ignoring a warning to countries in the region that there was a severe risk of drought, and opposition politicians have accused the government of failing to respond adequately to forecasts of increasingly frequent extreme weather events.

“We know the ‘coastal El Niño’ comes from time to time. We know we are a country that is extremely vulnerable to the effects of climate change. We should have prepared ourselves better,” said the leader of the New Peru movement, Verónika Mendoza, earlier this week.

The frustrations of those affected were evident in Tambogrande, Piura, where dozens called for help as the country’s education minister, Marilú Martens, briefly visited the town by helicopter.

“We are dealing with this emergency in the short term, but of course we need long-term strategies to avoid these situations so the people are not continually suffering in these emergencies,” Martens told the Guardian. She said the government has set aside $800m Peruvian soles for Peru’s hard-hit north and would implement programmes to prevent the spread of diseases such as dengue, which is spread by mosquitoes which breed in stagnant water.

A spokesman for the Peruvian ministry of environment said it was premature to attribute the floods to climate change though there are studies which suggest the El Niño phenomenon will become more frequent as a result of global warming.

“It is a duty of our government and society to work in order to reduce risk of vulnerability,” said Dimitri Gutiérrez. “Part of this work should be investing more for urban and territorial use planning.”