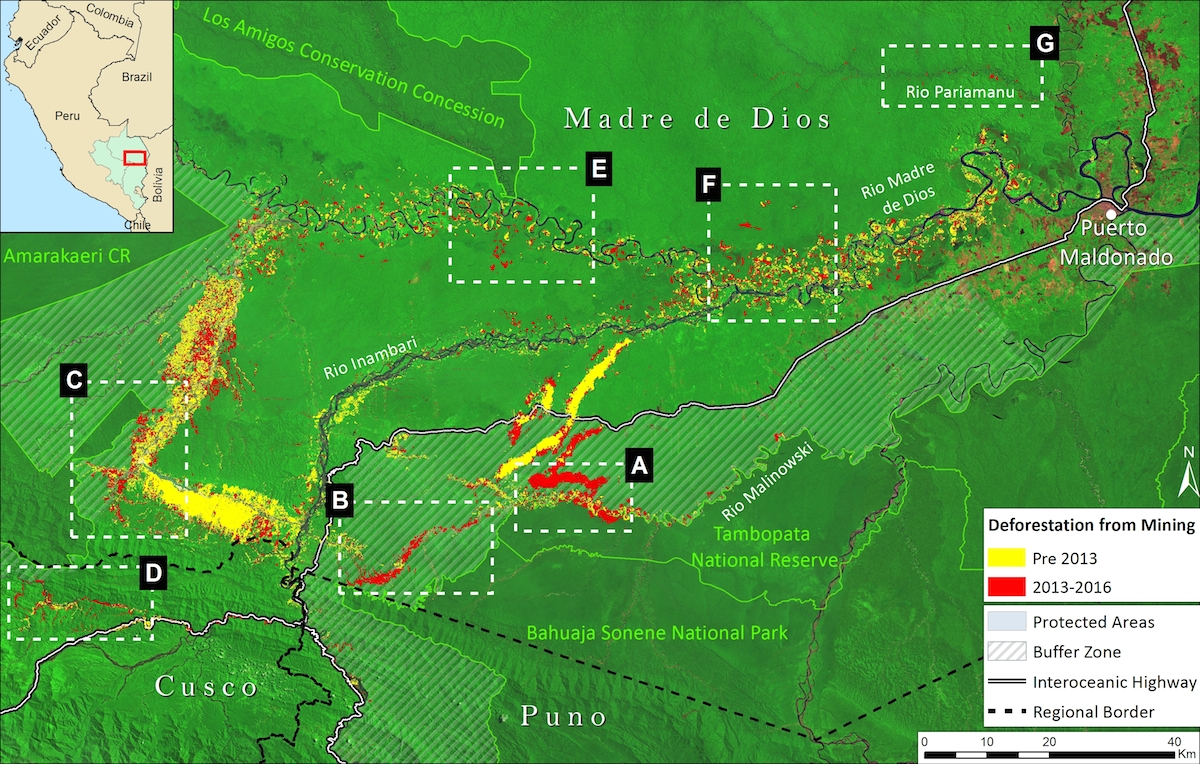 A recent analysis tallied the amount of deforestation caused by illegal gold mining in Peru, finding 62,500 hectares of forest was lost in four years...

Gold mining in Peru has razed almost 62,500 hectares of forest – an area over ten times the size of Manhattan – in the southern Peruvian Amazon between October 2012 and October 2016, according to a new report by Monitoring of the Andean Amazon Project (MAAP). While the tendrils of gold mining are spreading across the country, the region of Madre de Dios still accounts for the vast majority of mining deforestation to date, MAAP researchers write.

According to the report, deforestation attributed to artisanal and small-scale gold mining has slowed in recent years. Mining activity peaked between 2010 and 2012 – when it was tearing down around 6,300 hectares of forest per year – but has since fallen by over 40 percent to a rate of 2,700 hectares per year.

Matt Finer, lead MAAP researcher and co-author of the report, explained that government interventions are likely responsible for the recent decline in mining deforestation.

“Increased government attention and intervention is a factor in the post 2012 decline,” Finer said in an email to Mongabay. “2013 marked a turning point in terms of government attempting to tackle the issue, and 2014 was the year with the highest intensity of interventions. We can see that in the data, with 2014 having the lowest amount of gold mining deforestation in recent years.”

Mining deforestation has slowed, but it remains a formidable threat to biodiversity in parts of Peru. According to the report, as much as half of recent mining occurred within buffer zones – areas designed to boost the conservation value of the protected areas they surround. Gold mining counters this purpose by clearing forests, changing the course of rivers, and altering biological communities.

“Habitat fragmentation and degradation by ASM [artisanal and small-scale mining] operations has affected the composition of animal communities, and accelerated the extirpation of some species,” researchers wrote in a study published earlier this year in Tropical Conservation Science. “In addition, ASM operations could alter species behavior (e.g. displace animals deeper into the forest) and have been linked to bushmeat hunting and consumption.”

According to Mikaela Weisse, a Research Analyst at the World Resources Institute, buffer zones – important as they are for connecting habitats – lack incentives for monitoring and enforcement by government agencies. Relative to protected areas, buffer zones are simply less protected, she said.

“The response to illegal activity in buffer zones is not very well coordinated, and there doesn’t seem to be a great incentive to stop operations,” Weisse told Mongabay. “Whereas, in protected areas, SERNANP [Peru’s National Protected Areas Service] has authority to shutdown operations and levy fines.”

Stricter monitoring and enforcement doesn’t necessarily prevent mining altogether, however. According to MAAP, nearly 500 hectares of forest were razed in two protected areas in the last four years.

The largest incursion of mining in a protected area occurred within Tambopata National Reserve, MAAP writes. Since the first invasion in 2015, mining has leveled 450 hectares of primary and secondary forest inside the reserve, home to some 600 species of birds, 1,200 species of butterflies, and 200 species of mammals. 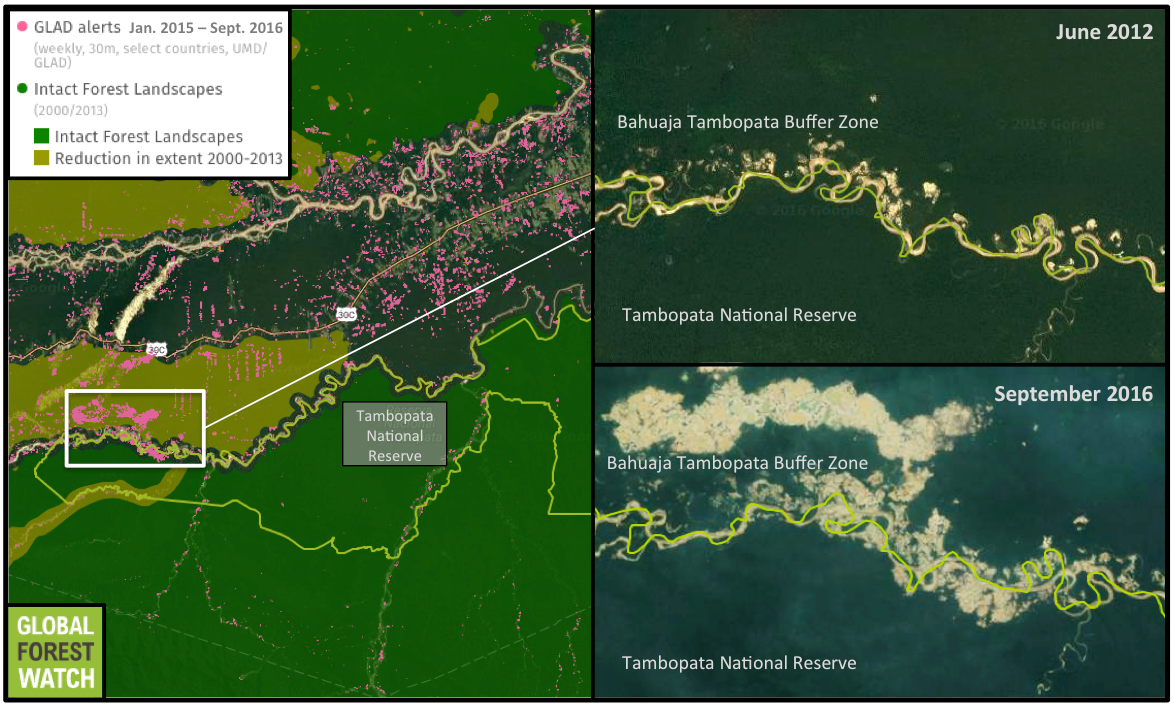 Amarakeri Communal Reserve – land of the Harakmbut, Yine and Machiguenga indigenous peoples – has also been subject to recent mining activity. Illegal miners cut back 11 hectares of of forest within the park boundaries between 2014 and 2015. 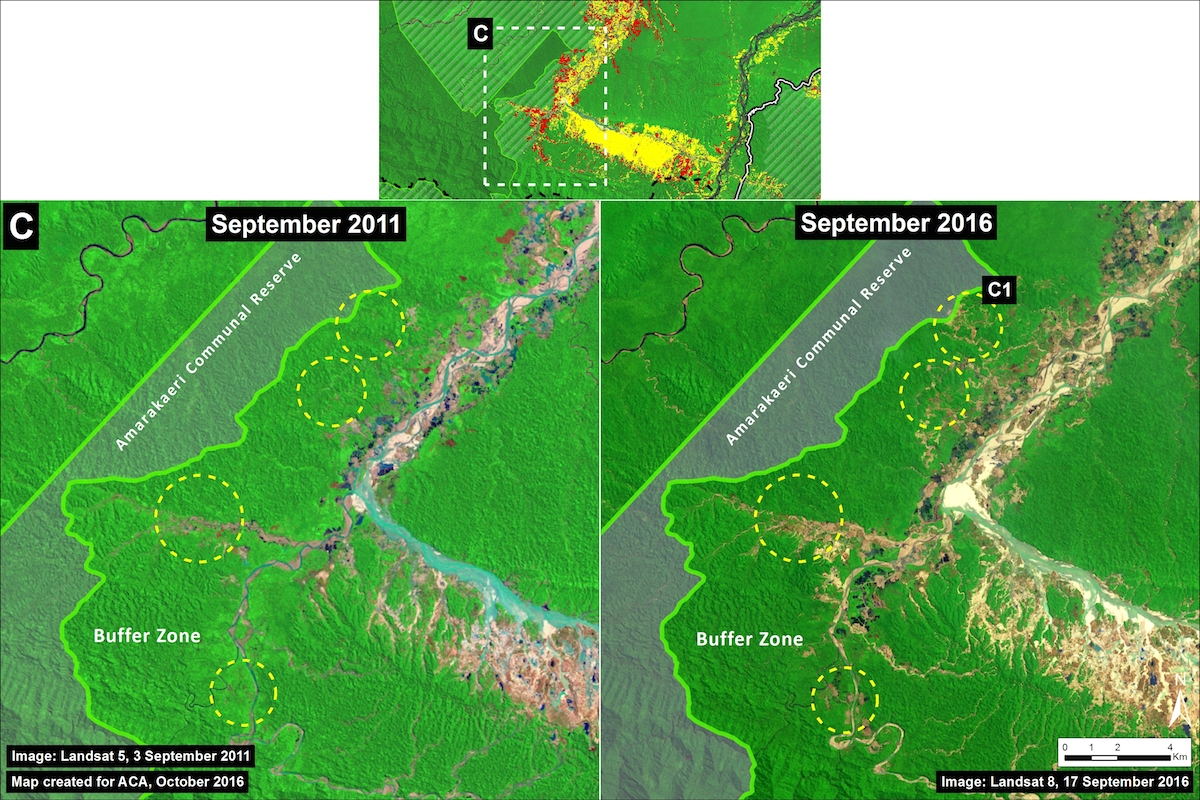 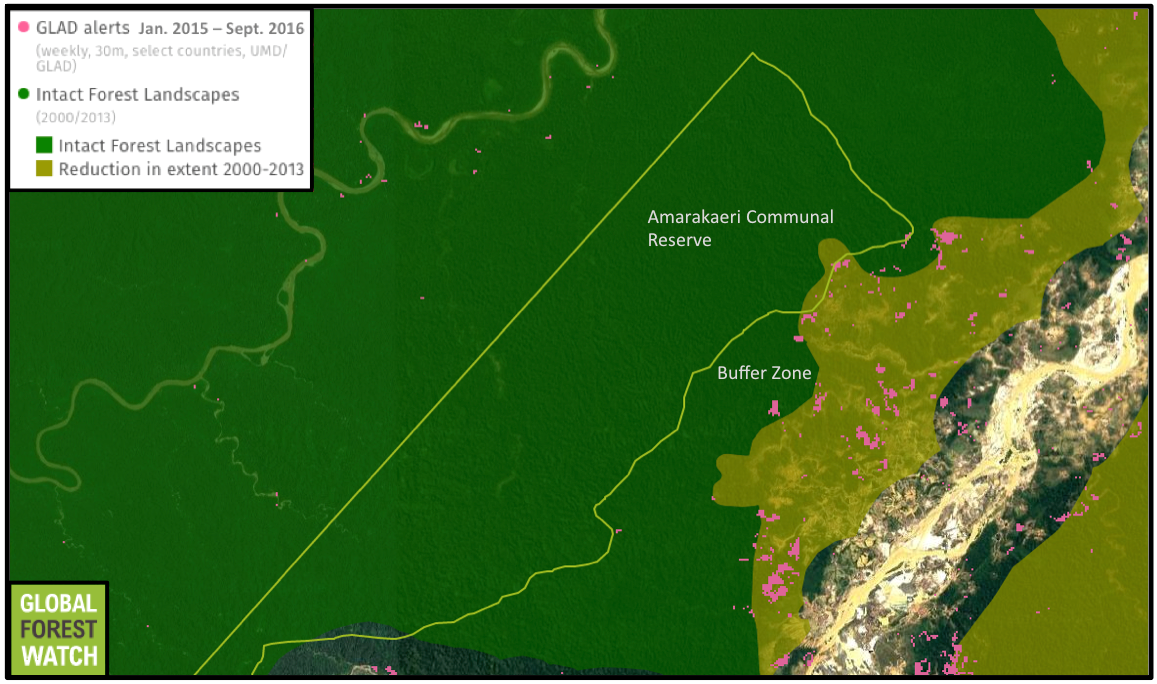 Much of this gold mining incursion has been occurring in IFLs that were intact as of 2000. More recent areas are pushing into IFLs that were undisturbed in 2013 — as well as into Amarakaeri Communal Reserve itself.

Recent gold mining in other areas

MAAP also pointed to areas outside of protected areas and buffer zones where high levels of gold mining were recently documented.

In the region of Cusco, around 400 hectares of forest have been lost to mining along the Araza and Nuciniscato rivers, according to MAAP researchers. Cusco is the only region north of Madre de Dios for which MAAP reported high levels of mining deforestation in recent years. 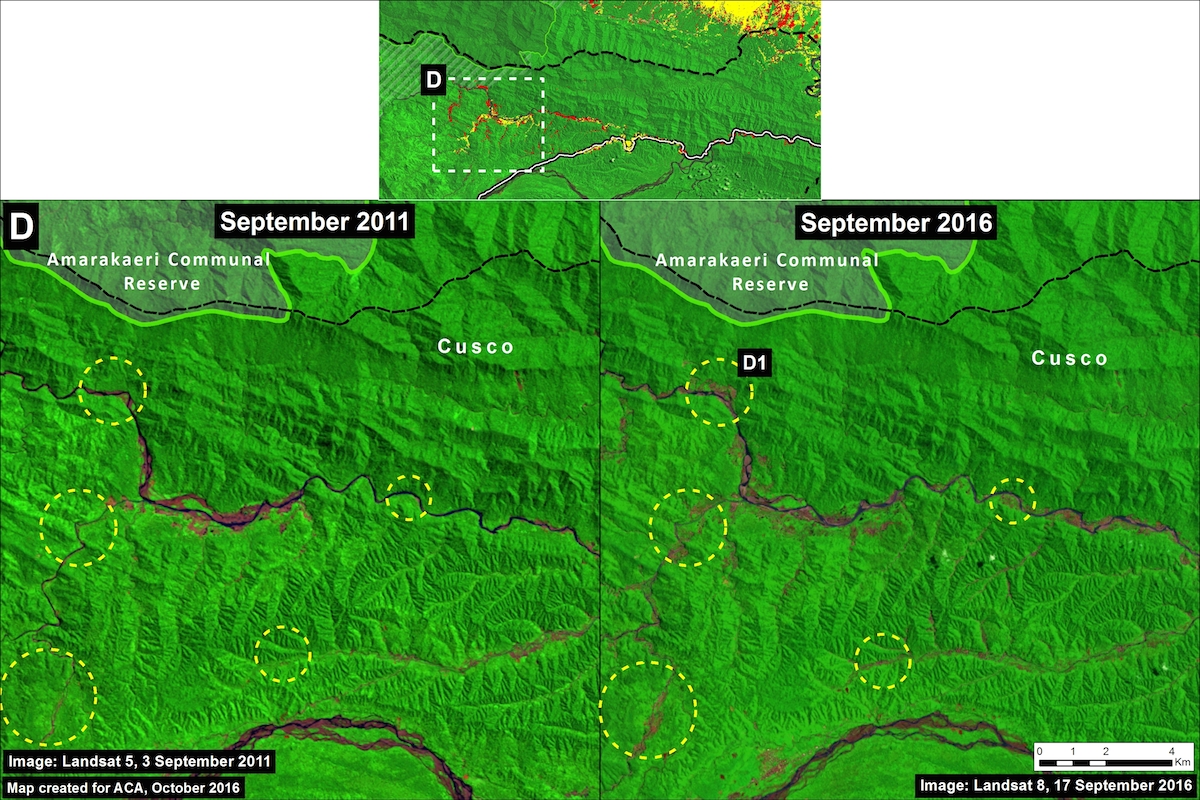 MAAP also highlighted gold mining deforestation advancing in small, scattered arrangements along the Madre de Dios River, and fresh mining incursions along the Pariamanu River that had resulted in almost 70 hectares of forest loss by September 2016. 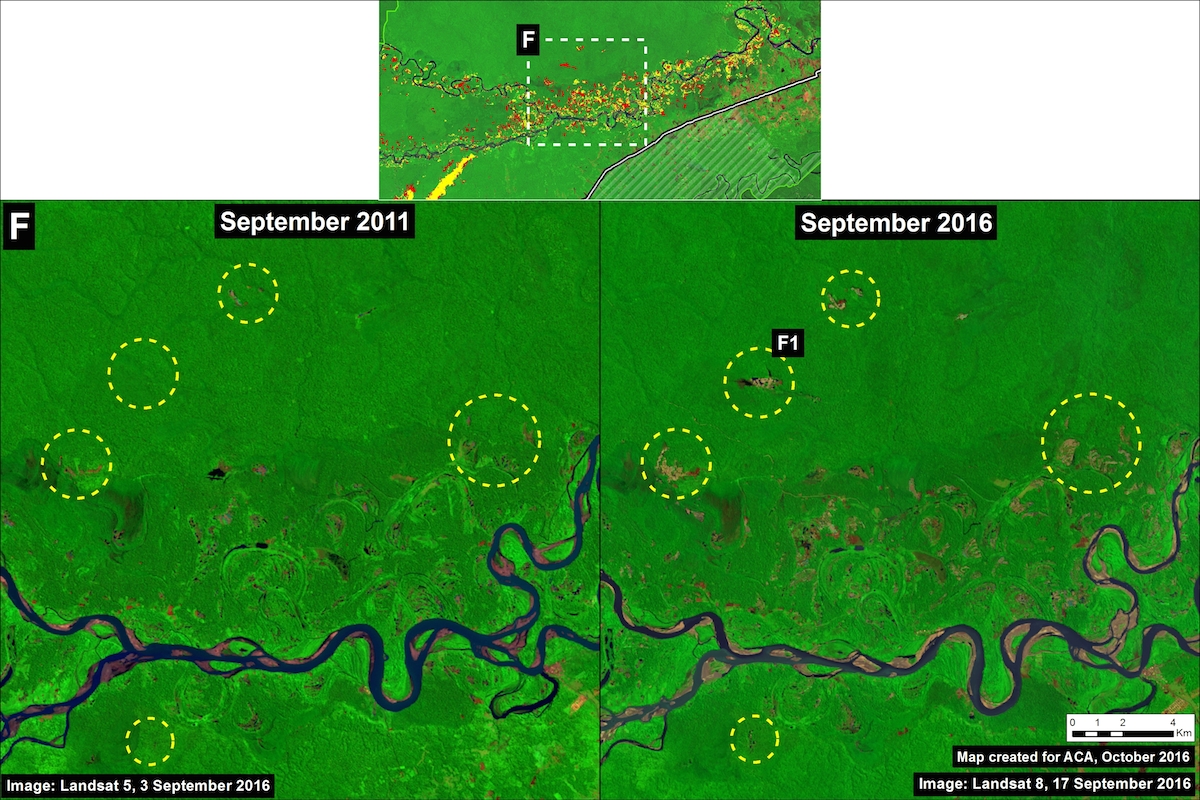 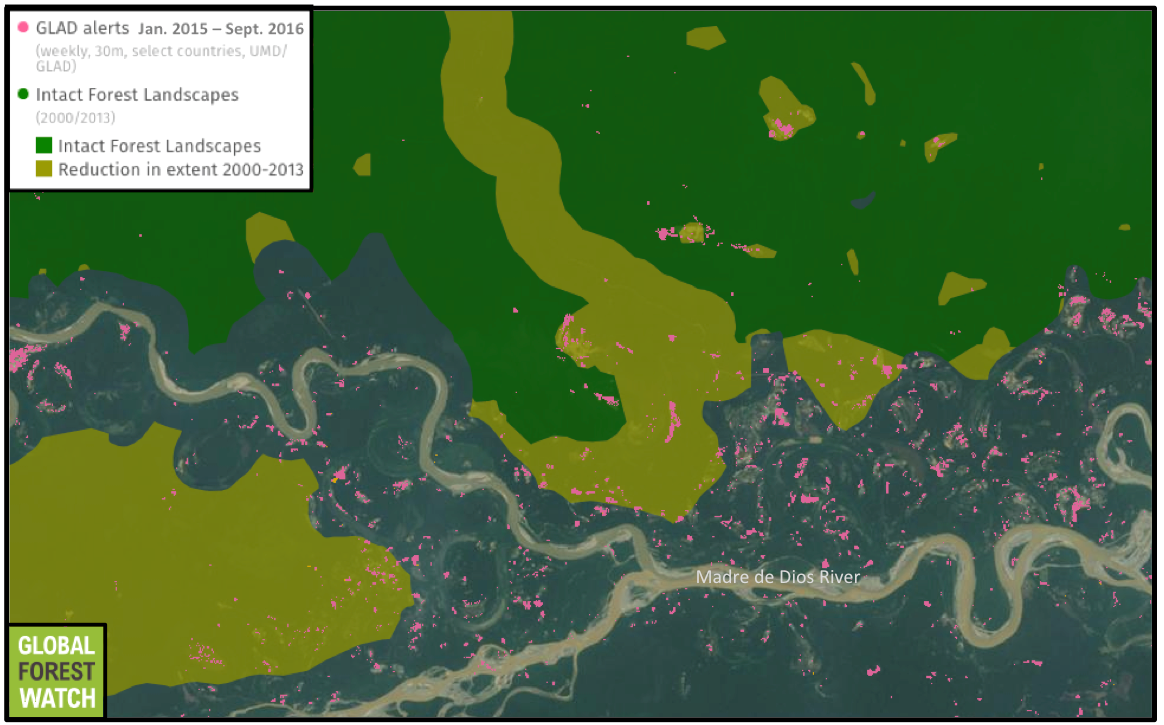 Scattered mines north of the Madre de Dios River have created expanding pockets of disturbance in an IFL that was continuous in 2000.

The impacts of artisanal mining extend beyond deforestation and biodiversity loss – the illicit activity can also have grave consequences for human health.

Most artisanal gold miners – comprising over a quarter of the industry in Peru – still use mercury to collect flecks of gold. When mixed with sludge dredged from river beds or excavated from cleared land, mercury gloms together with particles of the precious metal, forming an amalgam that can be easily identified and collected. Mercury is then burned off, leaving chunks of gold and toxic vapor behind.

According to Aubrey Langeland, a PhD Candidate at the University of Michigan’s School of Public Health, mercury enters the ecosystem through bacteria and accumulates in organisms, like fish, that humans consume.

“Mercury converts into [a neurotoxic form known as] methylmercury through bacteria,” Langeland said. “Once that happens, it’s in a biologically active form that can travel up the food chain as bigger things eat smaller things.”

Mercury contamination – which can cause tremors, insomnia, memory loss, and other symptoms – has been detected in communities in the Peruvian Amazon. In fact, Peru declared a 60-day state of emergency in Madre de Dios early this year after a growing number of studies revealed toxic levels of mercury in local communities. 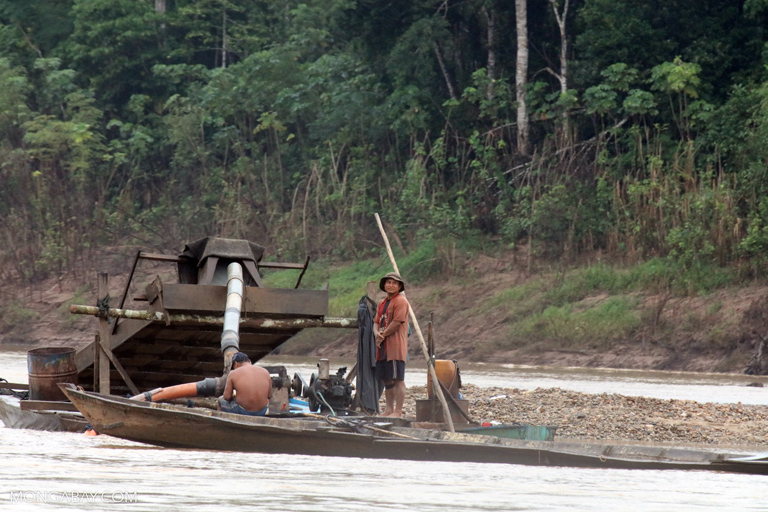 Most of the illegal mining activies happening in the Peruvian Amazon are caused by relatively small operations. Photo by Rhett A. Butler

According to Langeland, the consequences of illegal mining may endure for years to come.

“It’s persistent,” she said. “Illegal mining won’t go away in a generation, or two, or three. It will be here for the foreseeable future.”

And there are other solutions, Langeland said.

“One thing that we all, as consumers, can do is be mindful of where we are buying our gold from,” she said. “This can be difficult to trace, so there’s a really great opportunity for NGOs to step in and introduce ‘green gold’ [similar to sustainable or conflict-free diamonds] as a marketing strategy.

But Langeland is also quick to emphasize that interventions and changes in consumer behavior don’t target the heart of the problem – poverty in Peru.

“People are doing this work because they’re living in poverty,” she said. “If the alternative [to mining] is not sending your kids to college or not being able to feed your family, it’s a pretty easy choice.”