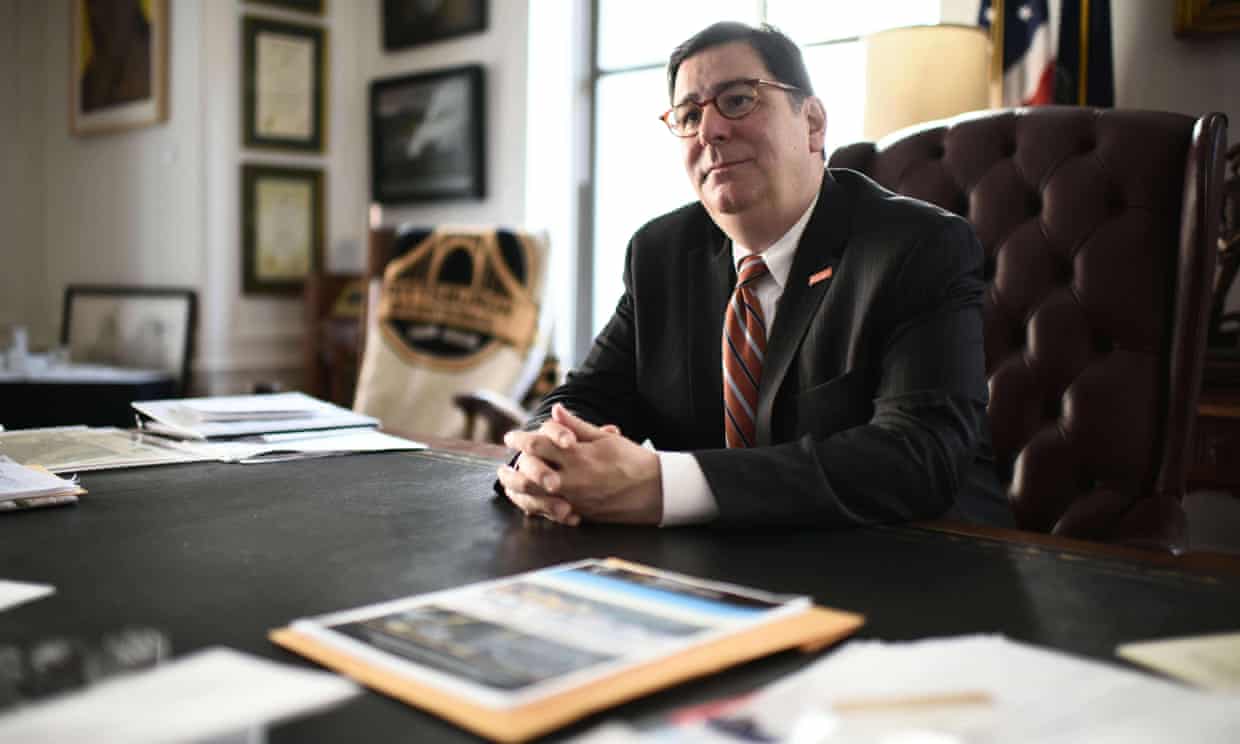 Local and international efforts might be enough to limit the damage Trump’s scorched Earth approach...

(Job One News Blog Editor's note: Having the lowest approval rating of any standing American President ever, Donald Trump pulled out of the Paris agreement against the wishes of the majority of Governors, Mayors, States and Cities of our Nation, including many CEOs of major corporations. Now many of these Statesmen are dfyingTrump and vowing to adhere to our Nations promise to the agreement. Once again the Spririt of the American people has risen above "Bad Government" and will do the right thing, what needs to be done no matter the cost. "Make America Great Again"? America IS GREAT!)

"I was elected to represent the citizens of Pittsburgh, not Paris"

So said Donald Trump in a speech justifying his irrational, historically irresponsible decision to withdraw the United States from the Paris international climate treaty. Of course, 75% of Pittsburgh residents voted for Hillary Clinton, and many city residents have since written about the outdatedness and absurdity of Trump’s invocation of Pittsburgh, which aims to be 100% powered by renewable energy by 2035. In fact, Pittsburgh joined 210 other “climate cities” representing 54 million Americans (17% of the national population), pledging:

"we will adopt, honor, and uphold the commitments to the goals enshrined in the Paris Agreement. We will intensify efforts to meet each of our cities’ current climate goals, push for new action to meet the 1.5 degrees Celsius target, and work together to create a 21st century clean energy economy."

Yesterday, the mayors of Pittsburgh and Paris co-authored a New York Times editorial rejecting Trump’s efforts to pin the two cities against each other on climate change. 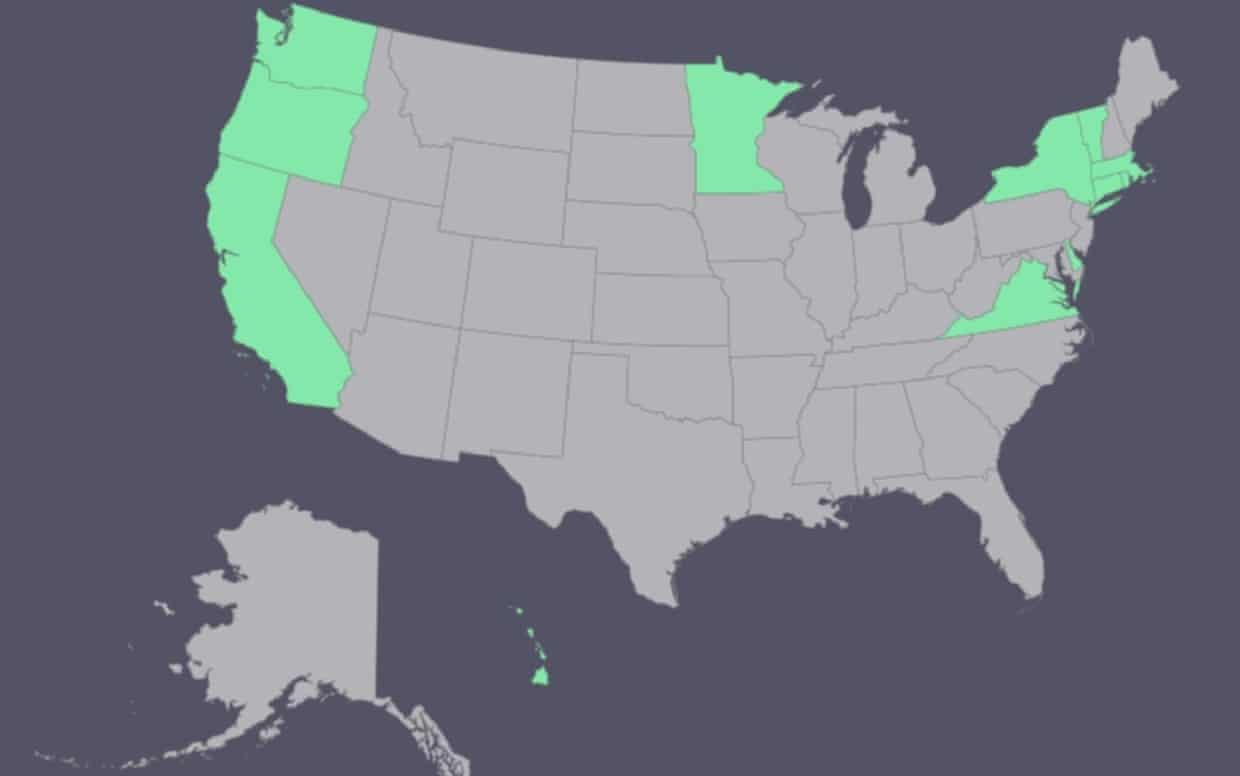 More than 1,000 U.S. governors, mayors, investors, universities, and companies joined the “We Are Still In” campaign, pledging to meet the goals of the Paris agreement. And California Governor Jerry Brown has effectively become America’s unofficial climate change ambassador.

What will be the effect on climate change?

Trump’s withdrawal from the Paris accord could have a positive or negative effect on the global climate, depending on how the rest of the world responds. Zeke Hausfather at Carbon Brief looked at the research on the subject, and found that if the whole world abandons the Paris agreement and continues with business-as-usual fossil fuel burning, we’ll see more than 4°C global warming above pre-industrial temperatures. This would be catastrophic, putting us on a path to a mass extinction event.

Fortunately it appears that we won’t let that happen. Were every country to follow through with Paris pledges made to date, we’d see about 3°C warming, but the agreement also includes a review of countries’ pledges every 5 years. By steadily ratcheting down carbon pollution targets, we could potentially stay below the 2°C Paris target.

Obviously the United States is no longer going to meet its initial Paris pledges. Were America to continue on a no-Paris business-as-usual path, it would add about 0.2–0.3°C to global warming. That may not sound like a lot, but we’re already at 1°C, so the Trump path would eliminate any realistic chance of the world staying below the 2°C danger limit.

However, if the next American president were to sign back on with Paris and renew US climate policy efforts, Hausfather estimates that the lost time under Trump’s reign would have a negligible impact of just 0.01–0.02°C extra global warming. As I noted last week, the 2020 American election will be a climate referendum. Will America endorse or reject Trump’s scorched Earth policy?

It’s also important to note that the Trump effect on global warming will only be minimal as long as the rest of the world follows through with the Paris pledges. There are encouraging signs from major players like China, the EU, and India. However, it’s easy to see how other countries could be discouraged from meeting their targets when the world’s largest historical carbon polluter has announced that it will take no responsibility for its actions.

Government regulations shouldn’t be used to pick winners and losers

But of course throughout his campaign and presidency, Trump has explicitly promised to save the dying coal industry. He’s fruitlessly trying to fulfill that pledge by rolling back all regulations and policies that protect public and environmental health from coal pollution, because that pollution has costs. Failing to put a fee on carbon pollution, for example, is effectively a massive trillion dollar government subsidy to the coal and oil industries.

Pruitt also wrongly claimed that we’ve added 50,000 jobs in the coal sector over the past quarter, when in reality there are only 50,000 coal mining jobs in the US in total. That number has been steadily declining for decades due to increased mechanization of the industry, and because other (cleaner) energy sources have become cheaper. 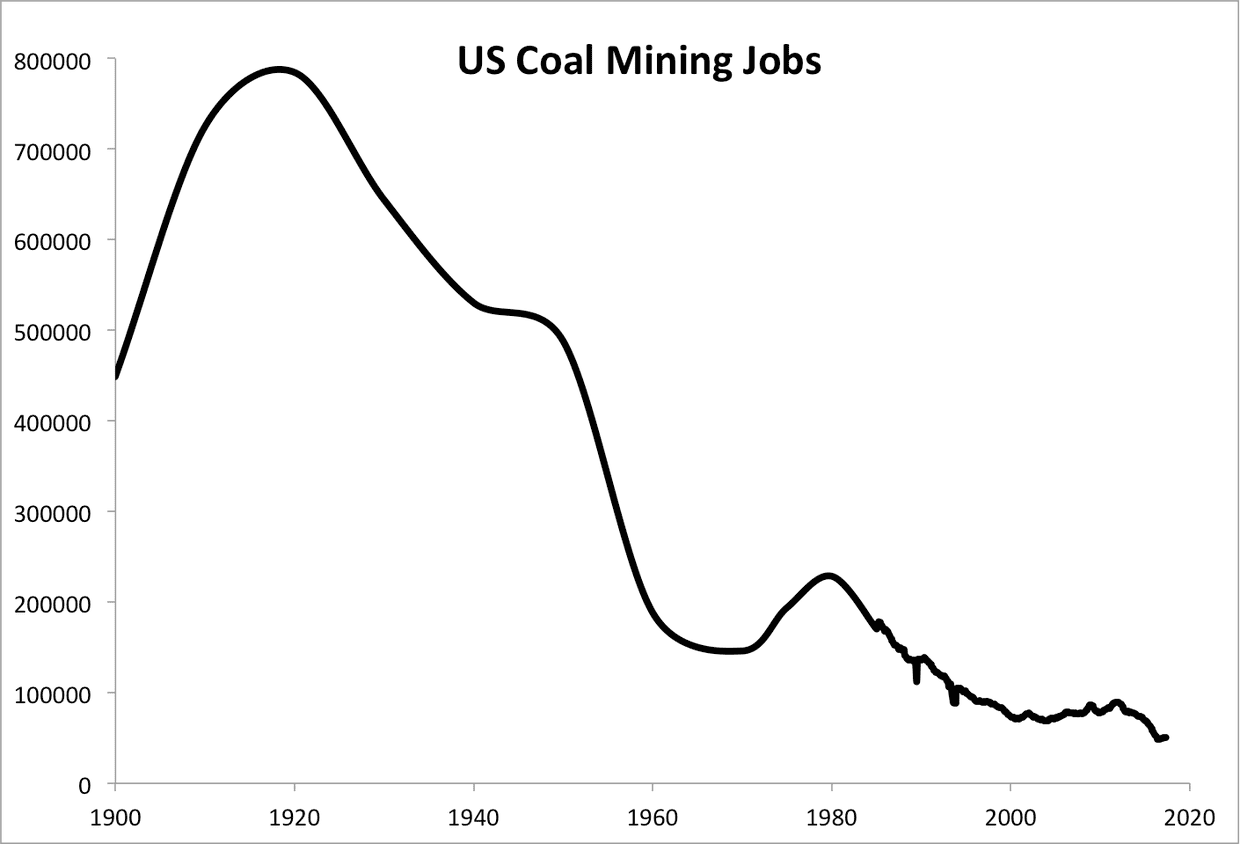 Coal mining jobs in the US (1900–2016). Data from the US Federal Reserve and the Energy Information Administration. Illustration: Dana Nuccitelli

At the same time, renewable energy jobs have been rising, and surpassed coal industry jobs several years ago. 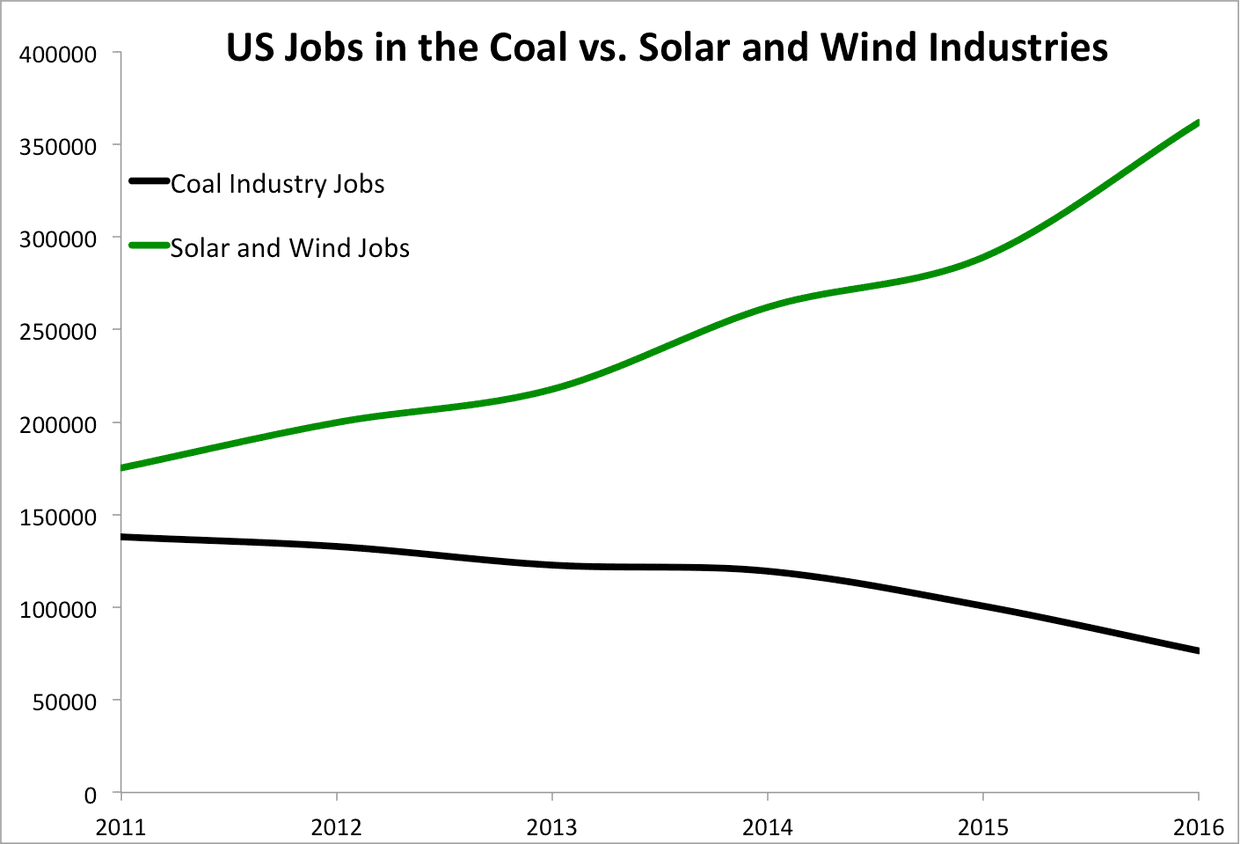 US jobs in the coal industry vs. the wind and solar industries (2011–2016). Data from the US Federal Reserve, American Wind Energy Association, and The Solar Foundation. Illustration: Dana Nuccitelli

We’ve been aware of the need for climate action for decades. The global economy is transitioning away from fossil fuels and toward cleaner, cheaper energy sources. As a result, that’s where we’re seeing the fastest jobs growth. The whole world recognizes this, as do business, academics, and most political leaders. And yet Trump is trying to throw away our future for the sake of a dirty 70,000-job industry.

Related: China and California sign deal to work on climate change without Trump...

Regions whose economies have depended on coal certainly deserve assistance as those jobs go away. But there are better ways to help than by peddling lies about bringing back extinct coal jobs; for example, through retraining programs, as Hillary Clinton proposed.

It should go without saying that pulling out of the Paris agreement, increasing America’s carbon pollution, and lying that coal jobs will come back it an unwise, destructive path. Pittsburgh knows it, as do most Americans and the rest of the world. It’s bad for the economy, for public health, and most importantly for the future prospects of human society.