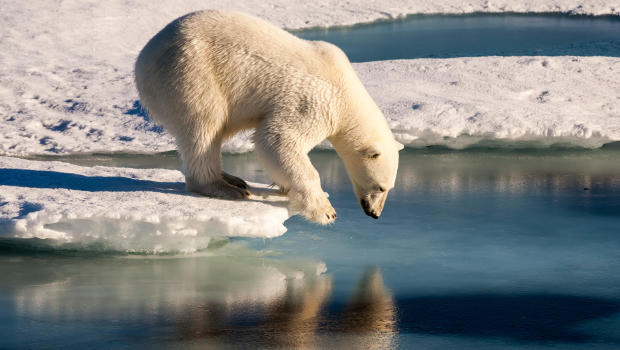 Polar bear standing on the edge of an ice floe. A new study says faster ice drift increases risks to the species as the climate warms. istockphoto
ANCHORAGE, Alaska -- Rapid global warming has sped up the movement of sea ice off Alaska's coasts, and already at-risk polar bears are paying a price, a new U.S. study says...

Most sea ice moves throughout the year and the iconic white bears are on a perpetual walk to stay within their preferred habitat, said U.S. Geological Survey research ecologist George Durner, lead author of the study.

He compares it to living on a treadmill that has picked up speed because ice is thinner, more brittle and moving faster because of wind and ocean currents.

A walk among polar bears... 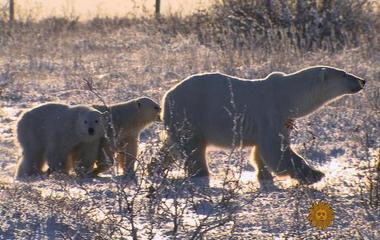 "Increased sea ice drift rates likely exacerbate the physiological stress due to reduced foraging opportunity already experienced by many polar bears in the warming Arctic, adding yet another 'straw to the camel's back,'" Durner said.

Polar bears were listed as threatened under the Endangered Species Act in 2008 amid the alarming loss of summer sea ice in recent decades and climate models indicating the trend would persist. However, the government said the act would not be used to regulate greenhouse gas emissions.

The U.S. polar bear recovery plan says that without action to address climate change -- the primary cause of diminishing sea ice -- it is unlikely that polar bears could be saved. The plan released in January noted positive signs such as emission goals in the Paris climate agreement.

President Donald Trump, however, withdrew from the international pact last week, arguing that it had disadvantaged the U.S. "to the exclusive benefit of other countries," leaving American businesses and taxpayers to absorb the cost.

Sea ice at the poles is melting at record pace... 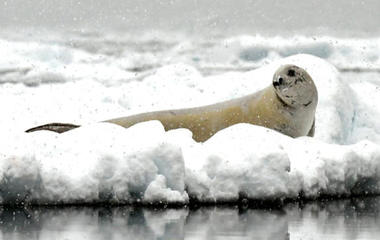 Mr. Trump's decision flew in the face of a vocal campaign by large companies to keep America in the agreement, and it sparked anger among some chief executives. "Climate change is real," Jeff Immelt, CEO of General Electric, said in a tweet after the president's announcement. "Industry must now lead and not depend on government."

In the wake of Mr. Trump's speech, Elon Musk, head of electric-car maker Tesla, resigned from the president's business advisory council. "Leaving Paris is not good for America or the world," he tweeted.Bob Iger, chief of Walt Disney, followed suit in quitting the council over the Paris move.

The hundreds of big companies that backed staying with the Paris accord run the full range of business sectors. They included retailers like Walmart, tech giants such as Apple, automakers like General Motors and even the leading lights of the fossil fuel industry, notably Exxon Mobil.

Trump also has called for expanded petroleum development in polar bear habitat, including offshore Alaska waters and parts of areas the National Petroleum Reserve-Alaska and the Arctic National Wildlife Refuge.

"There's still a lot of hope," she said.

The political moves come as the Geological Survey and University of Wyoming study documented how polar bears use more energy to stay within their home range.

Researchers made a conservative estimate that bears will have to kill one to three more seals a year to compensate for faster-moving ice, a challenge for bears already facing fewer hunting opportunities.

Durner compared their plight to people living in a town hit by both inflation and rising unemployment.

"For the polar bear, the Arctic is becoming more expensive to live in," he said.

Polar bears can go for extended periods without eating but then gorge on ringed and bearded seals. Ringed seals give birth on sea ice in spring and early summer, and polar bears sniff out their lairs.

Polar bears leave clues behind in their footprints... 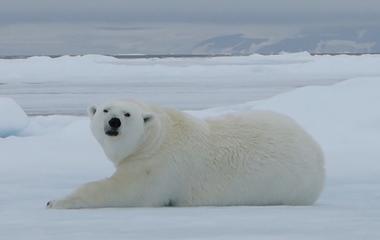 In the new study, researchers looked at data from radio-collared female polar bears in the Beaufort and the Chukchi Seas during two periods: 1987-1998 and 1999-2013.

Sea ice changed in amount, thickness and composition in the second period as melting seasons lengthened.

Researchers concluded that the bears must kill 2 to 6 percent more seals per year to make up for burning more calories on faster-moving sea ice. The study did not address whether they walk faster or spend more time moving to keep up with the ice.

Bears in the Chukchi Sea, off Alaska's northwest coast, had to walk farther and burn more calories than south Beaufort bears but are in better shape because more food is available, Durner said.

Amy Cutting, animal curator at the Oregon Zoo, said in an email that the paper is a key piece in the growing literature examining challenges faced by polar bears.

With decades of location and movement data on bears, she said, the Geological Survey is uniquely positioned to assess and quantify effects of changes in sea ice.

"This kind of research is critical to understanding the specific mechanisms through which climate change is impacting polar bear biology," Cutting said.