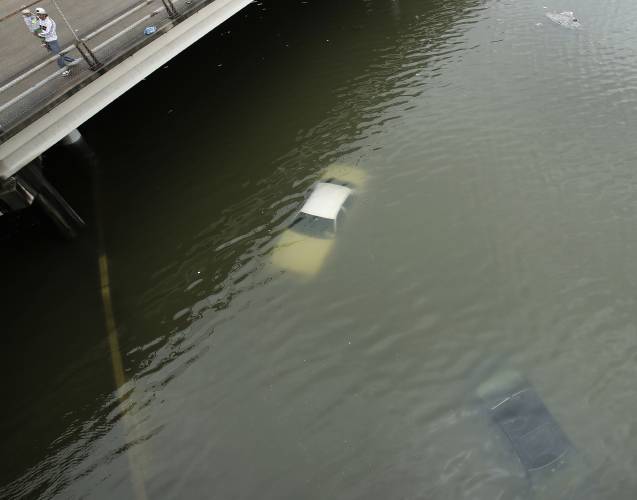 In this Aug. 27, 2017, file photo, people look at submerged cars on a freeway flooded by Tropical Storm Harvey near downtown Houston, Texas. After Hurricanes Harvey, Irma and Maria blitzed the nation, most Americans think weather disasters are getting more severe and they see global warming’s fingerprints all over them. A new poll by the Associated Press-NORC Center for Public Affairs Research says 68 percent of those surveyed think weather disasters seem to be worsening, compared to 28 percent who think they are staying the same and only 4 percent who say they are less severe. (AP Photo/Charlie Riedel, File) Charlie Riedel

A new poll from the Associated Press-NORC Center for Public Affairs Research finds that 68 percent of Americans think weather disasters seem to be worsening, compared to 28 percent who think they are staying the same and only 4 percent who say they are less severe.

And 46 percent of those who think it’s getting worse blame man-made climate change mostly or solely for the wild weather, while another 39 percent say it’s a combination of global warming and natural variability.

“Just with all the hurricanes that are happening this year ... it just seems like things are kind of mixed up,” said Kathy Weber, a 46-year-old stay-at-home mom from Menomonie, Wisconsin.

When Hurricane Nate washed ashore in the Gulf Coast earlier this month, it was one of the first storms that Greg Thompson did not evacuate for. Thompson, a retired pest control researcher in New Orleans, said “it’s pretty irrational” that people and politicians can deny global warming when the Gulf of Mexico is so much hotter than decades ago and storms seem so much more powerful.

Susan Cutter, who directs the Hazards and Vulnerability Research Institute at the University of South Carolina, said she’s not surprised by the poll results.

“How can you not” notice it, Cutter said. “The public sees the connection because they see it happening to their neighbors, themselves. They see it on television. And they’re not responding to a particular political constituency.”

Cutter and other experts say from a science perspective, it is clear that the United States is getting more extreme weather and climate change plays a role.

This year so far has seen 15 weather disasters that cost $1 billion or more, tied for the most in the first nine months of the year, according to the National Oceanic and Atmospheric Administration.

An analysis of 167 years of federal storm data by The Associated Press finds that no 30-year period in history has seen this many major hurricanes, this many days of those storms spinning in the Atlantic, or this much overall energy generated by those powerful storms.

Even though she went down to help Hurricane Harvey victims in Texas as a missionary and midwife, Gwendolyn Posey of Oklahoma just doesn’t see any increase in extreme weather.

Posey points to a record 12-year period during which no major hurricane hit the United States. During that time period, Atlantic hurricanes were still more active than normal, but didn’t hit the mainland United States.

“Anytime the government starts ramming things down my throat, I immediately think it’s wrong,” said Posey, a mother of 10, farmer and doctor of natural medicine. “Truth speaks for itself.”

According to the new poll, 63 percent of Americans think both that climate change is happening and that the government should address it, but there’s little sign that those feelings have strengthened since surveys conducted before this year’s run of hurricanes.

Thompson said he will take climate change into account when he casts his ballot.

“If there is somebody who actually says global warming isn’t happening, that’s a sign that they are too stupid, too crazy or too dishonest to get my vote,” Thompson said.