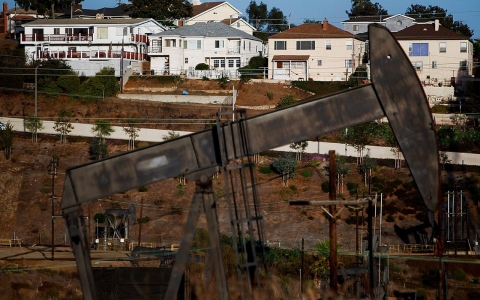 Chavel Lopez lives just a few miles north of Texas' Eagle Ford—one of the many regions in the country recently given a makeover from the fracking industry. "I just have to drive a bit south and see the wells and the flames," he said.

For Lopez, rather than a booming industry, these are signs of yet another pollution burden for the region's people of color.

"We already had issues. Right here in San Antonio, fuel storage tanks were all located on the eastside, predominantly African American neighborhoods," he said. "For some of these Hispanic neighborhoods, they were already dealing with uranium mining impacts and now the fracking of oil and gas."

And new evidence supports his fears: Poor and minority neighborhoods bear a disproportionate share of fracking wastewater wells in South Texas' Eagle Ford play, according to a new study.

The findings add to growing evidence that politically marginalized black, Hispanic and poor communities carry more than their share of the nation’s energy waste burden. Fracking wastewater contains potentially harmful chemicals and metals, and has been linked to surface and groundwater contamination and earthquake spikes.

“It’s another example of the environmental racism throughout the country,” said lead author Jill Johnston, an assistant professor at the University of Southern California’s Keck School of Medicine.

Industry representatives, however, called the study flawed, and said it provided no evidence that wastewater disposal is actually harming people in these communities.

Fracking, or hydraulic fracturing, is a process that uses horizontal drilling and high volume fluid injections to release oil and gas. Along with water, the injections contain sand and a mix of chemicals—some of which have been linked to cancer, hormone impacts, and reproductive problems.

It’s estimated that every well produces about five million liters of wastewater, which is eventually pumped into disposal wells.

After the Southwest Workers Union—where Lopez works as the labor coordinator—expressed concern about Eagle Ford fracking waste, Johnston and colleagues looked at the racial and economic makeup of residents where oil and gas disposal wells were permitted between 2007 and 2014 in the heavily fracked Eagle Ford area of Texas. The Eagle Ford covers 26 counties and has seen explosive growth as improvements in fracking technology opened the previously untappable reserves. Researchers estimated more than 1,000 new wastewater wells have been permitted in the area since 2007.

"We have the wrong complexion for protection."-Chavel Lopez, Southwest Workers UnionThey found that—after controlling for population density—people in areas that were more than 80 percent minority were twice as likely to live near permitted wastewater wells than areas less than 20 percent minority.

Of the more than 217,000 minorities living less than three miles from a disposal well, 83 percent were Hispanic, according to the study published last month in the American Journal of Public Health.

One main concern with disposal wells is that wastewater will make it back to surface water or contaminate nearby groundwater, said Desiree Plant, an assistant professor of chemical and environmental engineering at Yale University who was not involved in the study.

A separate study published last month in the Journal of Exposure Science & Environmental Epidemiology reported, “hydraulic-fracturing fluids and wastewater from unconventional oil and natural gas development contain hundreds of substances with the potential to contaminate drinking water.” The authors discovered that many compounds found are linked to reproductive and development impacts.

“A lot of people there [Eagle Ford area] are reliant on groundwater, putting this all underground is jeopardizing water sources,” Johnston said, adding that the additional truck traffic and other disposal infrastructure only adds to the burden.

Plant said some harmful pollutants such as benzene also can volatize from wastewater and taint the air near disposal wells.

In addition, oil and gas disposal wells are linked to earthquake spikes in states such as Oklahoma, Texas and Kansas. Injected wastewater flows into faults, decreasing the resistance to geologic processes that trigger earthquakes, said Justin Rubinstein, a USGS research geophysicist, in a lecture last summer.

The U.S. Geological Survey estimates that in the central and eastern U.S. from 1973 and 2008 there was an average of 21 earthquakes a year magnitude 3 and larger—that average jumped to 99 from 2009 to 2013, correlating with the fracking boom.

Texas is the nation’s number one oil and gas producer. It has more than 8,000 oil and gas wastewater disposal wells. The Railroad Commission of Texas oversees the wells but locations are chosen by disposal operators, said Ramona Nye, a spokesperson for the Commission.

Oil and gas representatives funneled questions to the Independent Petroleum Association of America's outreach program called Energy in Depth. Spokesman Steve Everley first questioned via email whether the authors were “using proximity to minorities as a media hook.”

The authors didn’t examine siting decisions for disposal wells, Everley noted, which suggests, “that this was more about promoting a particular narrative—one that was probably crafted before any ‘data’ were collected.”

The study follows a pattern for U.S. energy waste.

Last year researchers reported that fracking wells in Pennsylvania’s Marcellus Shale region are disproportionately located in poor rural communities. And it’s not just oil and gas—federal officials are discussing how to ease the coal ash burden on poor, minority communities, and a 2012 NAACP survey of all 378 coal-powered plants in the U.S. found they heavily impact low income minorities.

Johnston and colleagues wrote that marginalized communities are often targeted “because of the perceived lack of political power and limited resources with which to challenge a permit.”

"We have the wrong complexion for protection," Lopez said.

EHN welcomes republication of our stories, but we require that publications include the author's name and Environmental Health News at the top of the piece, along with a link back to EHN's version.

For questions or feedback about this piece, contact Brian Bienkowski at [email protected].