POPE FRANCIS SAYS DESTROYING THE ENVIRONMENT IS A SIN... 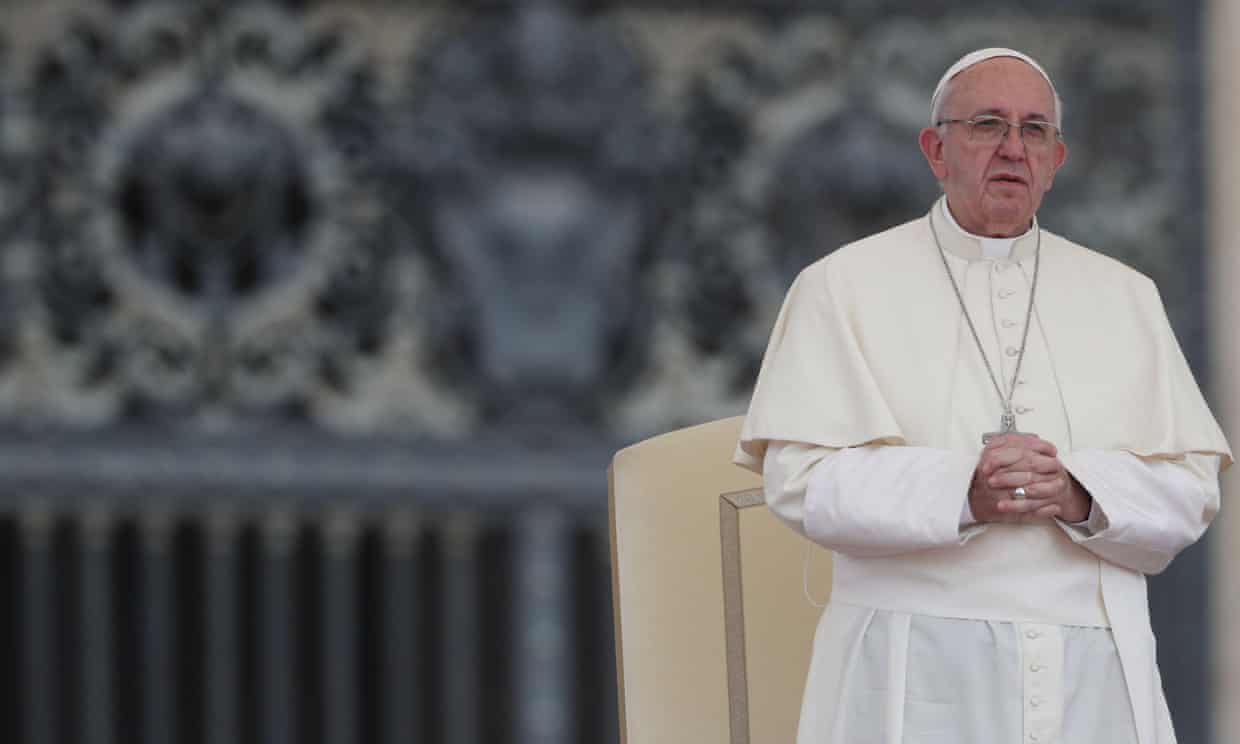 Pope Francis welcomes the Paris accord but suggests voters might need to take additional action to ensure their governments do not backtrack on the deal. Photograph: Galazka/Sipa/Rex Shutterstock

Pontiff says humans are turning planet into ‘wasteland full of debris, desolation and filth’ in call for urgent action on climate change...

Pope Francis has called for urgent action to stop climate change and proposed that caring for the environment be added to traditional Christian works of mercy such as feeding the hungry and visiting the sick.

In a message to mark the Catholic church’s World Day of Prayer for the Care of Creation that he launched last year, Francis said the worst impact of global warming was being felt by those who were least responsible for it – refugees and the poor.

The pontiff used the occasion to revive many of the powerful issues he highlighted a year ago in his provocative encyclical on the environment, Laudato si’, and his latest message seems certain to rankle conservatives.

Francis described man’s destruction of the environment as a sin and accused mankind of turning the planet into a “polluted wasteland full of debris, desolation and filth”.

“Global warming continues,” the pope said. “2015 was the warmest year on record, and 2016 will likely be warmer still. This is leading to ever more severe droughts, floods, fires and extreme weather events.

“Climate change is also contributing to the heart-rending refugee crisis. The world’s poor, though least responsible for climate change, are most vulnerable and already suffering its impact. ”

The pope said the faithful should use the Holy Year of Mercy throughout 2016 to ask forgiveness for sins committed against the environment and our “selfish” system motivated by “profit at any price”.

He called for care for the environment to be added to the seven spiritual works of mercy outlined in the Gospel that the faithful are asked to perform throughout the pope’s year of mercy in 2016.

“We must not be indifferent or resigned to the loss of biodiversity and the destruction of ecosystems, often caused by our irresponsible and selfish behaviour,” he said. “Because of us, thousands of species will no longer give glory to God by their very existence … We have no such right.”

The pope asked people to reflect on a society that lacked concern for social exclusion or the destruction of nature. He called for consumers to modify their modern lifestyle by reducing waste, planting trees, separating rubbish and making more use of car pooling.

“The resolve to live differently should affect our various contributions to shaping the culture and society in which we live,” he said.

Francis urged political and business leaders to stop thinking of short-term gains and work for the common good while taking steps to resolve the “ecological debt” between the global north and south.

“Repaying it would require treating the environments of poorer nations with care and providing the financial resources and technical assistance needed to help them deal with climate change and promote sustainable development,” he said.

Cardinal Peter Turkson, president of the Vatican’s council for peace and justice, said: “The first step is to humbly acknowledge the harm we are doing to the Earth through pollution, the scandalous destruction of ecosystems and loss of biodiversity, and the spectre of climate change.

“And to realise that when we hurt the Earth, we also hurt the poor.”

The Ghanaian cardinal, who helped draft the original encyclical, has just been appointed to head a new Vatican dicastery that will be responsible for the environment, migration, justice and healthcare. He told a Vatican media conference it was possible to create change and arrest environmental destruction.

“We should not think that our efforts – even our small gestures – don’t matter,” he said. “Virtue, including ecological virtue, can be infectious.”