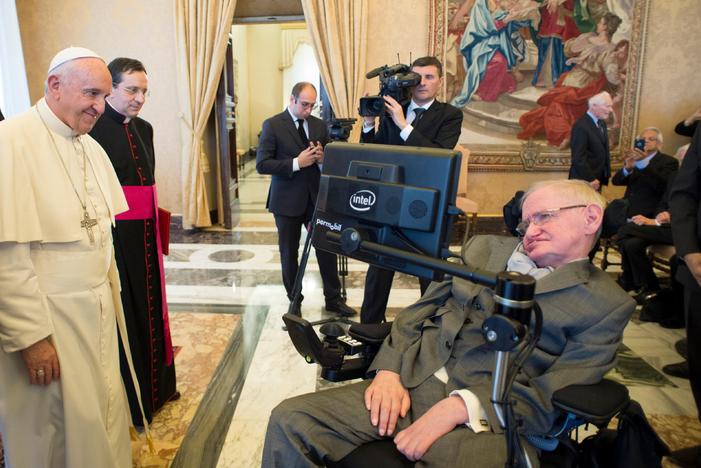 Pope Francis greets Stephen Hawking (R), theoretical physicist and cosmologist, during a meeting with the Pontifical Academy of Sciences in Vatican, November 28, 2016. Osservatore Romano/Handout via Reuters
Pope Francis urged national leaders on Monday to implement global environmental agreements without delay, a message that looked to be squarely aimed at U.S. President-elect Donald Trump...

Addressing a group of scientists that included theoretical physicist Stephen Hawking, the pope gave his strongest speech on the environment since the election of Trump, who has threatened to pull out of the 2015 Paris Agreement on climate change.

"The 'distraction' or delay in implementing global agreements on the environment shows that politics has become submissive to a technology and economy which seek profit above all else," Francis said.

Francis, who wrote an encyclical, or papal letter, on the environment last year, took a swipe at those who dispute that climate change is caused by human activity, criticizing "the ease with which well-founded scientific opinion about the state of our planet is disregarded". 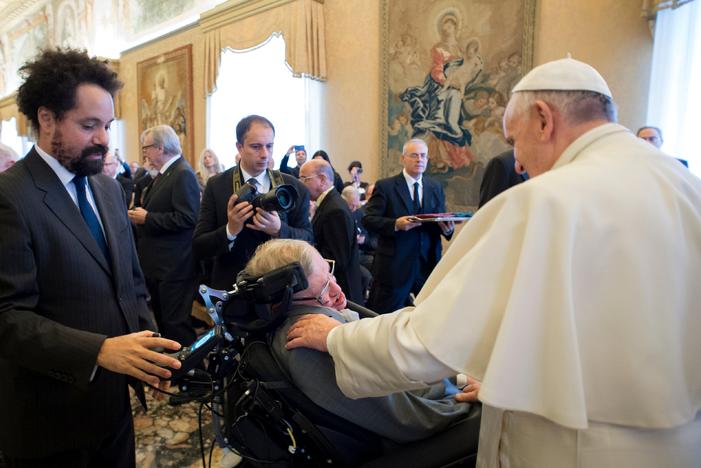 Pope Francis greets Stephen Hawking (C), theoretical physicist and cosmologist, during a meeting with the Pontifical Academy of Sciences in Vatican, November 28, 2016. Osservatore Romano/Handout via Reuters

During the campaign, Trump called climate change a hoax.

Last week he appeared to soften his stance, telling The New York Times he was keeping "an open mind" and that there might be "some connectivity" between human activity and global warming.

In his speech, the pope said scientists should "work free of political, economic or ideological interests, to develop a cultural model which can face the crisis of climatic change and its social consequences".

A U.S. withdrawal from the pact, agreed to by almost 200 countries, would set back international efforts to limit rising temperatures that have been linked to the extinction of animals and plants, heat waves, floods and rising sea levels.

Francis called for "an ecological conversion capable of supporting and promoting sustainable development."

He said humans could not consider themselves "owners and masters of nature, authorized to plunder it without any consideration of its hidden potential and laws of development".

In his encyclical last year to the world's 1.2 billion Roman Catholics, the pope called for swift action to save the planet from environmental ruin and urged world leaders to hear "the cry of the earth and the cry of the poor".