PUERTO RICANS ASK: WHEN WILL THE LIGHTS COME BACK ON? 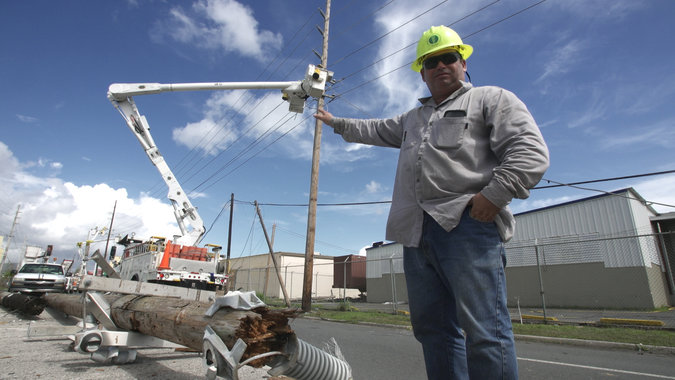 Javier Hernández Saurí, a lineman who works for the Puerto Rico Electric Power Authority, is concerned about the lack of crews and materials on the island. Credit Deborah Acosta/The New York Times

CAGUAS, P.R. — Luis Rodríguez looked at the huge concrete power pole in his front yard, resting on his daughter’s Chevrolet and blocking the tow truck he drives to make a living, and wondered: When is help coming?

“Usually, after something like this happens, people are out on the streets working immediately,” said Mr. Rodríguez, who lives with his 16-year-old daughter. “But this time, the government’s response has been very slow.”

Four weeks after Hurricane Maria, packing winds of up to 155 miles an hour, knocked out power to the entire island, 80 percent of Puerto Rico still does not have electricity. Some residents have not had power for 45 days — since Hurricane Irma brushed by after Labor Day.

For Mr. Rodríguez, that means using candles for lighting and a gas stove for cooking. He buys ham and cheese sandwiches and coffee for breakfast.

Stranded by Maria, Puerto
Ricans Get Creative to Survive...

Sending Relief by Air and Sea to Puerto Rico From the Bronx...

Trump: ‘We’ll Be There’ for Puerto Rico, a Day After Critical Messages...

In contrast with Texas after Hurricane Harvey and Florida after Irma, where thousands of repair workers rushed in to restring power lines, only a few hundred electrical workers from outside the island have arrived to help.

It was not until Saturday that the Puerto Rican government said it had the federal funding needed to bring in more workers. And until a week ago, the small Montana company hired to get the lights back on had only 165 workers on the ground; it now has about 300.

In comparison, 5,300 workers from outside the region converged on coastal Texas in the days after Hurricane Harvey to restore a power loss that was about a tenth the size, said Larry Jones, a spokesman for AEP Texas. Electricity was back on for almost everyone within two weeks.

In Florida, 18,000 outside workers went in after Hurricane Irma knocked out electricity to most of the state last month, according to FPL, Florida’s largest power company.

In Puerto Rico, the brunt of the work has been left to the 900 members of local crews.

Industry experts said poor planning, a slow response by power officials and Puerto Rico’s dire financial straits had led to a situation that would be unfathomable in the continental United States. Logistical challenges — like where to house the thousands of extra workers needed to get the lights back on — still have not been resolved.

“Thirty days after the storm, I see very little progress,” said Eduardo Bhatia, an opposition senator who in 2014 wrote an energy reform law. He added, “I don’t see the boots on the field doing the work, and that is a tragedy.”

At the White House on Thursday, President Trump said the administration deserved a 10 for its response to the hurricanes that struck Puerto Rico and other parts of the United States.

But he conceded that the destruction of the power grid was one of Puerto Rico’s biggest long-term challenges, despite the provision of “massive numbers” of generators to temporarily provide electricity to hospitals and other crucial facilities. 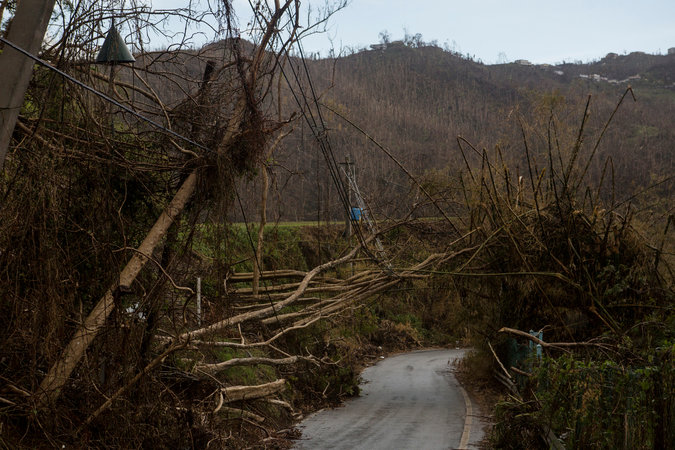 The extensive damage from Hurricane Maria has slowed the restoration of power in Puerto Rico. Credit Kirsten Luce for The New York Times

“You can’t really bring electric back until you rebuild the power plant,” Mr. Trump said during an appearance with Gov. Ricardo A. Rosselló of Puerto Rico. The federal government will help rebuild the power grid, he said, but “the plant itself is going to take a while.”

In Gurabo, just outside Caguas, Reynaldo De Hostos spends most of his time outside seeking relief from insufferable indoor heat. “Ever since we lost electricity, we can’t sleep,” he said, standing inside his pitch-dark home. Every hour or so at night, he said, he and his family use the air-conditioning in the car for a brief respite.

He added, “We’re rewiring mostly with materials that can be reused.”

The Army Corps of Engineers, charged by the Federal Emergency Management Agency with restoring Puerto Rico’s power, estimated that it needed at least 2,000 additional workers. So far, the Corps has brought only about 200 workers, and most of them were dedicated not to restoring power but to installing generators at crucial locations.

After major storms, power companies typically rely on mutual aid agreements to get electricity restored. Outside companies send thousands of workers, and electric companies pay for the service with funds from FEMA.

Such agreements are “absolutely critical,” said Devon Streit, the deputy assistant secretary for infrastructure security at the Department of Energy, which is helping to coordinate the restoration of power. But in this instance, some companies were concerned about getting paid, she said, because the Puerto Rico Electric Power Authority, known as Prepa, had filed for bankruptcy protection in July after defaulting on $9 billion in debt.

Ricardo Ramos, chief executive of the power authority, said outside companies had been hesitant to come until they knew where the storm would make landfall. After that, he needed several days to assess the damage, and communications were down. 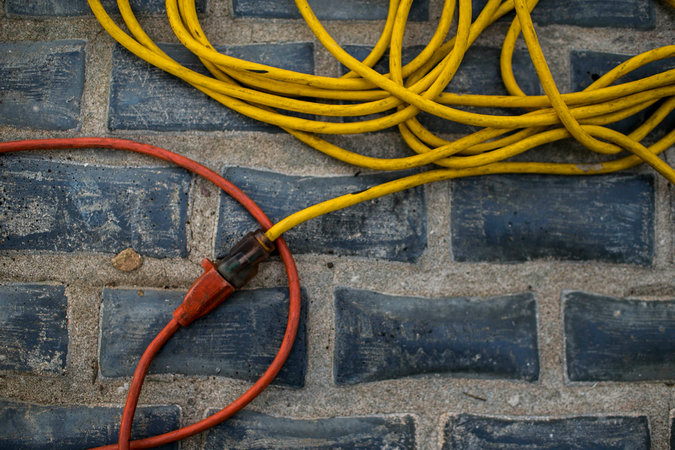 By the time Mr. Ramos had a full grasp of the damage a week after the storm, he said, the Corps of Engineers had been tasked with overseeing power restoration, a duty outside its usual purview.

That was something of a relief, Mr. Ramos said, because mutual aid agreements cost millions of dollars that the power authority cannot spare.

“With the Corps of Engineers, they do the work, they pay for it, and they get reimbursed by FEMA,” he said. “So it never goes through my pocket.”

The Montana company he hired, Whitefish Energy Holdings, agreed to do the work without a down payment. The chief executive, Andy Techmanski, said that he got the contract because he showed up in Puerto Rico unannounced.

“I mobilized what I could, which was private contractors, and I am happy with the decision. I would do exactly the same,” he said. “I think we’re right on target.”

The Corps of Engineers did not announce its large contract, for $240 million, until this week. An earlier $35 million contract was for mobile gas turbines, but the Corps said it did not know when the companies would be sending employees to Puerto Rico.

Brig. Gen. Diana Holland, the commander of the Corps’ South Atlantic Division, said the contracting process went “really quickly,” despite the fact that taxpayers demand a careful review of such emergency contracts. 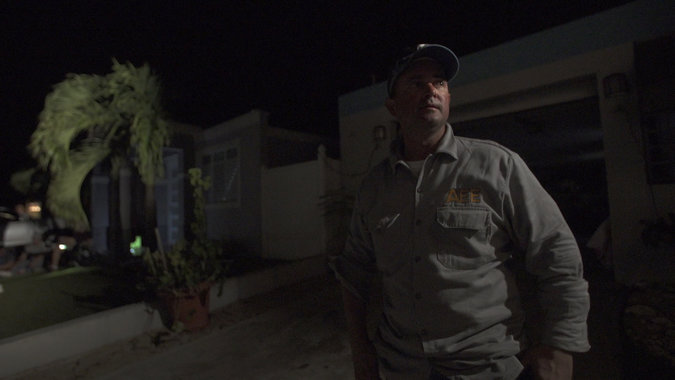 For now, thousands of power poles remain on the ground. Most Puerto Ricans survive by storing food in ice chests or eating in the few open restaurants. They swat mosquitoes that fly in through the open windows, and some wait in line for hours to get ice. With about a third of the island’s bank branches still closed, lines snake around the block for access to cash machines.

“Last night, someone tried to break into my house and into two of my neighbors’ houses to steal. They tried to force the lock on our door,” said Mario Luis Casanova Caballero, a lineman working with Mr. Hernández Saurí who was using a generator to power his lights and to help keep refrigerators running for three neighbors.

But on Saturday, Governor Rosselló committed to a more aggressive timetable, pledging to have 95 percent of power restored by December. His public affairs secretary, Ramón Rosario Cortés, acknowledged that the crews in place were not enough.

“We have 230 brigades. If we used only these brigades, we’d be talking long months — years,” Mr. Rosario said.

The governor said an additional 966 brigades would be trickling in over the next three weeks.

The number of workers, however, is not the only problem. The Corps of Engineers said damage to the island’s ports had slowed shipments of needed equipment, including utility poles and cable.

The task is also daunting, Mr. Ramos said, because some of the power plants date to the 1950s and were never maintained. Power was restored to parts of San Juan three times in the last few weeks, only for the grid to collapse.

As he waits, Mr. Rodríguez tries to get by the best that he can.

Generators are expensive, he said, and hard to find. And lines at the supermarket remain long.

“I buy our drinking water in Costco,” he said. “I made a three-hour line on Sunday to buy eight gallons of water. That’s what we’re surviving on.”