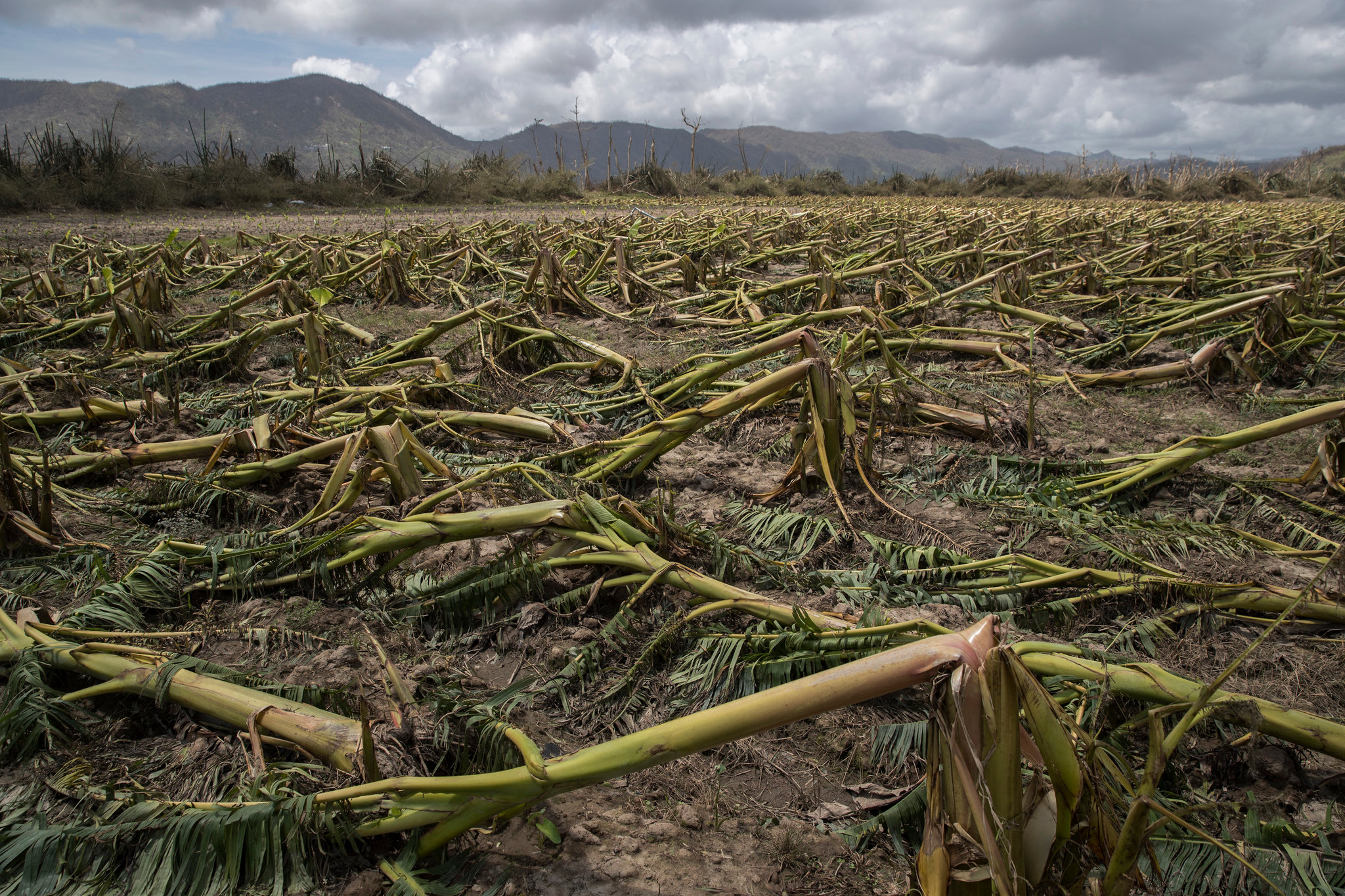 Plantain trees flattened by Hurricane Maria in Yabucoa, P.R. In a matter of hours, the storm destroyed about 80 percent of the crop value in Puerto Rico, the territory’s agriculture secretary said. Credit Victor J. Blue for The New York Times

YABUCOA, P.R. — José A. Rivera, a farmer on the southeast coast of Puerto Rico, stood in the middle of his flattened plantain farm on Sunday and tried to tally how much Hurricane Maria had cost him...

“How do you calculate everything?” Mr. Rivera said.

For as far as he could see, every one of his 14,000 trees was down. Same for the yam and sweet pepper crops. His neighbor, Luis A. Pinto Cruz, known to everyone here as “Piña,” figures he is out about $300,000 worth of crops. The foreman down the street, Félix Ortiz Delgado, spent the afternoon scrounging up the scraps that were left of the farm he manages. He found about a dozen dried ears of corn that he could feed the chickens. The wind had claimed the rest.

“There will be no food in Puerto Rico,” Mr. Rivera predicted. “There is no more agriculture in Puerto Rico. And there won’t be any for a year or longer.”

Hurricane Maria made landfall here Wednesday as a Category 4 storm. Its force and fury stripped every tree of not just the leaves, but also the bark, leaving a rich agricultural region looking like the result of a postapocalyptic drought. Rows and rows of fields were denuded. Plants simply blew away.

In a matter of hours, Hurricane Maria wiped out about 80 percent of the crop value in Puerto Rico — making it one of the costliest storms to hit the island’s agriculture industry, said Carlos Flores Ortega, Puerto Rico’s secretary of the Department of Agriculture.

Across the island, Maria’s prolonged barrage took out entire plantations and destroyed dairy barns and industrial chicken coops. Plantain, banana and coffee crops were the hardest hit, Mr. Flores said. Landslides in the mountainous interior of the island took out many roads, a major part of the agriculture infrastructure there. 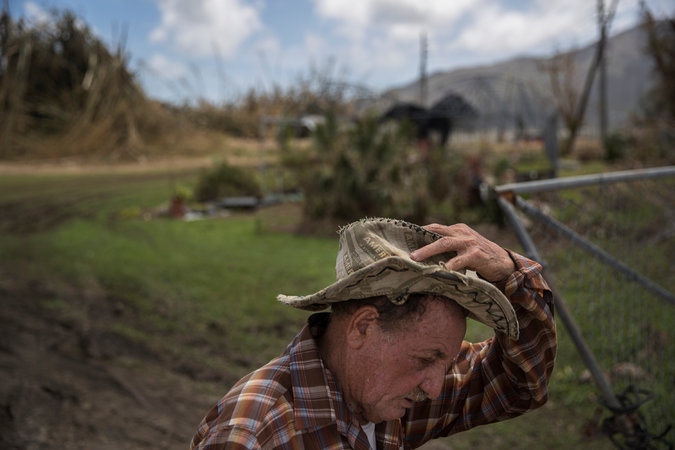 Félix Ortiz Delgado looked over the damage to his crops on Sunday. Credit Victor Blue for The New York Times

For over 400 years, Puerto Rico’s economy was based on agriculture, historically focused on sugar cane, tobacco and citrus fruits. The island’s economy rapidly industrialized after World War II, leading to the downfall of agriculture production. In recent years, in part because of the island’s economic recession, people went back to the fields, and the industry is going through a small renaissance, growing at 3 to 5 percent every year over the past six years, Mr. Flores said. A growing farm-to-table movement has generated optimism in recent years about an agricultural rebirth.

Puerto Rico already imports about 85 percent of its food, and now its food imports are certain to rise drastically as local products like coffee and plantains are added to the list of Maria’s staggering losses. Local staples that stocked supermarkets, school lunchrooms and even Walmart are gone.

“Sometimes when there are shortages, the price of plantain goes up from $1 to $1.25. This time, there won’t be any price increase; there won’t be any product,” Mr. Rivera said. “When I heard the meteorologist say that the two had turned into a three and then a four, I thought, ‘Agriculture in Puerto Rico is over.’ This really is a catastrophe.”

He noted that other islands that export food to Puerto Rico, such as the Dominican Republic, Dominica and St. Martin, were also hit, and that the food supply could be even more precarious if the island’s other suppliers were also affected.

“There won’t be any gandules at Christmas this year,” Mr. Ortiz said, referring to a local favorite usually served as a combination of rice, pigeon peas and pork called arroz con gandules. “Even if we planted now, they won’t be ready.”

Mr. Ortiz, 80, said he had been working these fields for seven decades. He has lived through his share of hurricanes, including Georges, which wiped out the local sugar refinery in 1998.

“I have never seen losses like these in any of my 80 years,” he said as he stood on a riverbank, counting the number of coconut trees that fell. He could earn $100 a month from each one of them. A dozen cracked in half, beside a nursery where the winds swept away all the seedlings and left behind broken glass and ruin.

He is not the owner, but he said it hurt all the same. “You know what it’s like to see the place where you earn your daily bread destroyed?”

Efrain M. Robles Menendez, a dairy farmer, said cattle ranchers had been hit hard, because not only was there major damage to the infrastructure needed to maintain the business, but the supply chain was also cut off. With stores closed and the power out, the dairy trucks have not come.

“Since Wednesday, I have thrown out 4,000 liters of milk a day,” he said. “Come back later, and watch me pour it all down the drain.”

Some see the potential for something positive to come out of a disaster. Agricultural officials are hoping this will be the island’s chance to modernize its outmoded agriculture industry.

“Agriculture is the most vulnerable sector to natural disasters,” Mr. Flores said. “But it’s also the one that can have the speediest recovery, and it’ll be the great surprise in the Puerto Rican economy, because we’re going to come back stronger.”

Mr. Flores said much of the traditional agriculture in the island had depended on energy-inefficient practices that waste too much water and produce large amounts of waste. Federal funds that will help farmers rebuild infrastructure damaged by the hurricane will present an opportunity to improve the industry, he said.

“We had an antiquated agricultural infrastructure that maybe now is the opportunity to make it more efficient,” he said. “Now is the moment because we’re starting from zero. Maybe it hadn’t been done before because there was no way of financing it. We’re going to rebuild better this time.” 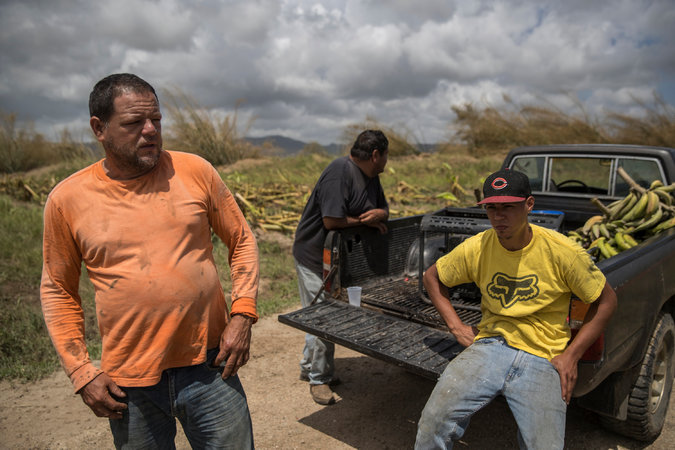 Eduardo Bhatia Gautier, a local senator, said, “We can start developing an agriculture industry that is more profitable and start exporting Puerto Rican products, something this island hasn’t done in decades.”

Puerto Rico currently imports about 85 percent of the food it consumes and exports only 15 percent of what it produces, according to the government. Puerto Rico, Mr. Bhatia said, could service a growing demand for organic foods in the mainland United States. He estimated it could take at least a year to get the industry back up and running, as the soil recovers and farmers replant trees.

But long-term optimism does little to help farmers contemplating the destruction they see around them.

Mr. Pinto, 62, drove to the capital last week to stock up on vegetables to sell at a kiosk he runs with his wife. He did so because his 14,000 plantain trees are all dead and he had nothing of his own to sell.

On the ride to San Juan, he looked around at toppled trees, downed telephone poles, tangled power lines, roofs and crumbled wood structures and wept.

“I could not take seeing my country in pieces like that,” he said, holding back tears.

Mr. Pinto also lost all of his cattle. Literally. He does not know where they are.

He plans to start over as he did a decade ago when he lost everything to a flood. He will get about 35 percent of the value back from insurance, and will not quit, he said, using an expression that has become a popular hashtag: #yonomequito — I will not give up.

By FRANCES ROBLES and LUIS FERRÉ-SADURNÍ