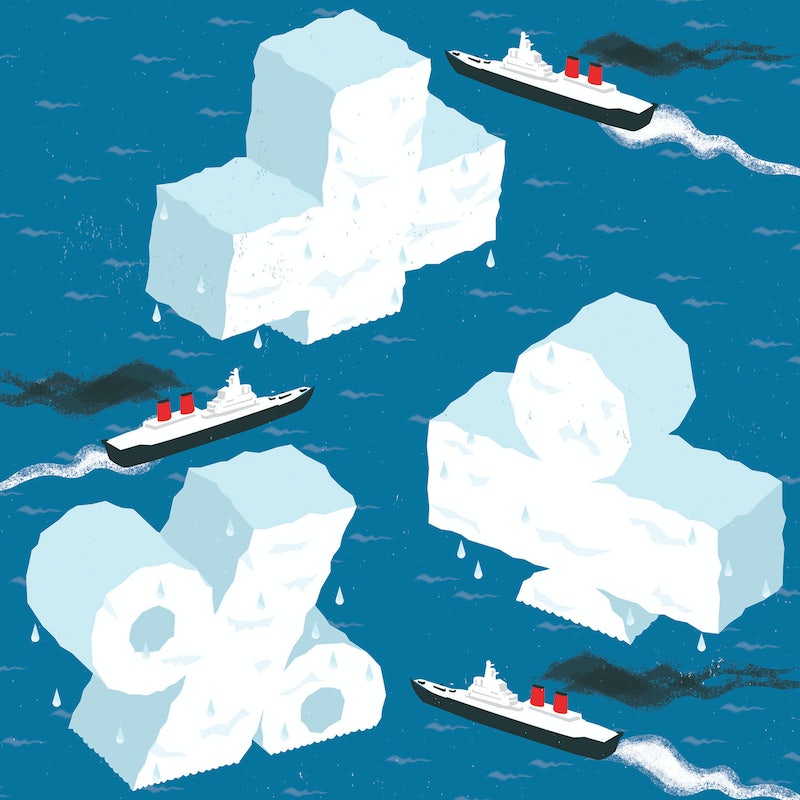 The numbers on global warming are even scarier than we thought...

The future of humanity depends on math. And the numbers in a new study released Thursday are the most ominous yet.

Those numbers spell out, in simple arithmetic, how much of the fossil fuel in the world’s existing coal mines and oil wells we can burn if we want to prevent global warming from cooking the planet. In other words, if our goal is to keep the Earth’s temperature from rising more than two degrees Celsius—the upper limit identified by the nations of the world—how much more new digging and drilling can we do?

That’s right: If we’re serious about preventing catastrophic warming, the new study shows, we can’t dig any new coal mines, drill any new fields, build any more pipelines. Not a single one. We’re done expanding the fossil fuel frontier. Our only hope is a swift, managed decline in the production of all carbon-based energy from the fields we’ve already put in production.

The new numbers are startling. Only four years ago, I wrote an essay called “Global Warming’s Terrifying New Math.” In the piece, I drew on research from a London-based think tank, the Carbon Tracker Initiative. The research showed that the untapped reserves of coal, oil, and gas identified by the world’s fossil fuel industry contained five times more carbon than we can burn if we want to keep from raising the planet’s temperature by more than two degrees Celsius. That is, if energy companies eventually dug up and burned everything they’d laid claim to, the planet would cook five times over. That math kicked off a widespread campaign of divestment from fossil fuel stocks by universities, churches, and foundations. And it’s since become the conventional wisdom: Many central bankers and world leaders now agree that we need to keep the bulk of fossil fuel reserves underground.

But the new new math is even more explosive. It draws on a report by Oil Change International, a Washington-based think tank, using data from the Norwegian energy consultants Rystad. For a fee—$54,000 in this case—Rystad will sell anyone its numbers on the world’s existing fossil fuel sources. Most of the customers are oil companies, investment banks, and government agencies. But OCI wanted the numbers for a different reason: to figure out how close to the edge of catastrophe we’ve already come.

Scientists say that to have even a two-thirds chance of staying below a global increase of two degrees Celsius, we can release 800 gigatons more CO2 into the atmosphere. But the Rystad data shows coal mines and oil and gas wells currently in operation worldwide contain 942 gigatons worth of CO2. So the math problem is simple, and it goes like this:

What’s worse, the definition of “morbid” has changed in the past four years. Two degrees Celsius used to be the red line. But scientists now believe the upper limit is much lower. We’ve already raised the world’s temperature by one degree—enough to melt almost half the ice in the Arctic, kill off huge swaths of the world’s coral, and unleash lethal floods and drought. July and August tied for the hottest months ever recorded on our planet, and scientists think they were almost certainly the hottest in the history of human civilization. Places like Basra, Iraq—on the edge of what scholars think was the Biblical Garden of Eden—hit 129 degrees Fahrenheit this year, approaching the point where humans can’t survive outdoors. So last year, when the world’s leaders met in Paris, they set a new number: Every effort, they said, would be made to keep the global temperature rise to less than 1.5 degrees. And to have even a 50–50 chance of meeting that goal, we can only release about 353 gigatons more CO2. So let’s do the math again:

A lot greater. To have just a break-even chance of meeting that 1.5 degree goal we solemnly set in Paris, we’ll need to close all of the coal mines and some of the oil and gas fields we’re currently operating long before they’re exhausted.

“Managed decline” means we don’t have to grind everything to a halt tomorrow; we can keep extracting fuel from existing oil wells and gas fields and coal mines. But we can’t go explore for new ones. We can’t even develop the ones we already know about, the ones right next to our current projects.

Related: A World at War-We’re under attack from climate change—and our only hope is to mobilize like we did in WWII.

In the United States alone, the existing mines and oil wells and gas fields contain 86 billion tons of carbon emissions—enough to take us 25 percent of the way to a 1.5 degree rise in global temperature. But if the U.S. energy industry gets its way and develops all the oil wells and fracking sites that are currently planned, that would add another 51 billion tons in carbon emissions. And if we let that happen, America would single-handedly blow almost 40 percent of the world’s carbon budget.

This new math is bad news for lots of powerful players. The fossil fuel industry has based its entire business model on the idea that it can endlessly “replenish” the oil and gas it pumps each year; its teams of geologists are constantly searching for new fields to drill. In September, Apache Corporation announced that it has identified fields in West Texas that hold three billion barrels of oil. Leaving that oil underground—which the new math shows we must do if we want to meet the climate targets set in Paris—would cost the industry tens of billions of dollars.

For understandable reasons, the unions whose workers build pipelines and drill wells also resist attempts to change. Consider the current drama over the Dakota Access oil pipeline. In September, even after pipeline security guards armed with pepper spray and guard dogs attacked Native Americans who were nonviolently defending grave sites from bulldozers, AFL-CIO President Richard Trumka called on the Obama administration to allow construction to proceed. “Pipeline construction and maintenance,” Trumka said, “provides quality jobs to tens of thousands of skilled workers.” The head of the Building Trades Unions agreed: “Members have been relying on these excellent, family-supporting, middle-class jobs with family health care, pensions, and good wages.” Another union official put it most eloquently: “Let’s not turn away and overregulate or just say, ‘No, keep it in the ground.’ It shouldn’t be that simple.”

She’s right—it would be easier for everyone if it weren’t that simple. Union workers have truly relied on those jobs to build middle-class lives, and all of us burn the damned stuff, all day, every day. But the problem is, it is that simple. We have to “turn away.” We have to “keep it in the ground.” The numbers are the numbers. We literally cannot keep doing what we’re doing if we want to have a planet.

“Keeping it in the ground” does not mean stopping all production of fossil fuels instantly. “If you let current fields begin their natural decline,” says Kretzmann, “you’ll be using 50 percent less oil by 2033.” That gives us 17 years, as the wells we’ve already drilled slowly run dry, to replace all that oil with renewable energy. That’s enough time—maybe—to replace gas guzzlers with electric cars. To retrain pipeline workers and coal miners to build solar panels and wind turbines. To follow the lead of cities like Portland that have barred any new fossil fuel infrastructure, and countries like China that have banned new coal mines. Those are small steps, but they’re important ones.

Even some big unions are starting to realize that switching to renewable energy would add a million new good-paying jobs by 2030. Everyone from nurses to transport workers is opposing the Dakota pipeline; other unions have come out against coal exports and fracking. “This is virtually unprecedented,” says Sean Sweeney, a veteran labor and climate organizer. “The rise of ‘climate unionism’ offers a new direction for the labor movement.” And if it spreads, it will give Democratic politicians more room to maneuver against global warming.

But to convince the world’s leaders to obey the math—to stop any new mines or wells or pipelines from being built—we will need a movement like the one that blocked the Keystone pipeline and fracking in New York and Arctic drilling. And we will need to pass the “Keep It in the Ground Act,” legislation that would end new mining and drilling for fossil fuels on public land. It’s been called “unrealistic” or “naïve” by everyone from ExxonMobil to the interior secretary. But as the new math makes clear, keeping fossil fuels in the ground is the only realistic approach. What’s unrealistic is to imagine that we can somehow escape the inexorable calculus of climate change. As the OCI report puts it, “One of the most powerful climate policy levers is also the simplest: stop digging.” That is, after all, the first rule of holes, and we’re in the biggest one ever.

This is literally a math test, and it’s not being graded on a curve. It only has one correct answer. And if we don’t get it right, then all of us—along with our 10,000-year-old experiment in human civilization—will fail.

Bill McKibben is the Schumann Distinguished Scholar at Middlebury College and co-founder of the climate group 350.org.

Do you know the horrible consequences you will need to adapt to and be aware of to replan your life?