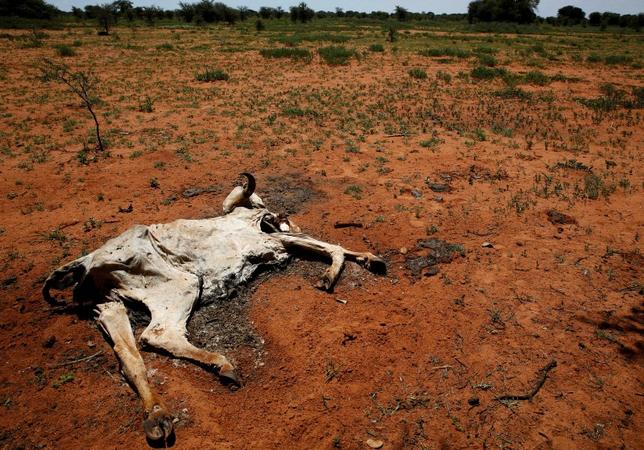 The carcass of a cow lies in a field in Disaneng village outside Mafikeng, South Africa, January 28, 2016.
Reuters/Sydney Seshibedi
A record surge in temperatures in 2016, linked to global warming and an El Nino weather event in the Pacific, is adding urgency to a deal by 195 governments in December to curb greenhouse gas emissions to slow climate change, scientists said on Monday...

Average global temperatures last month were 1.35 degree Celsius (2.4 Fahrenheit) above normal for February, the biggest temperature excess recorded for any month against a baseline of 1951-80, according to NASA data released at the weekend.

The previous record was set in January, stoked by factors including a build-up of greenhouse gases in the atmosphere and the strong El Nino event, which releases heat from the Pacific.

"I think even the hard-core climate people are looking at this and saying: 'What on Earth'?" David Carlson, director of the World Climate Research Programme at the U.N.'s World Meteorological Organization, said of the leap in temperatures.

"It's startling," he told Reuters. "It's definitely a changed planet ... It makes us nervous about the long-term impact." Scientists say global warming is causing more powerful downpours, droughts and rising sea levels.

Jean-Noel Thepaut, head of the Copernicus Climate Change Service at the European Centre for Medium-Range Weather Forecasts, said the long-term trend of warming "makes the implementation of the Paris agreement urgent."

He noted that 15 of the 16 warmest years since records began were in the 21st century.

In December 2015, 195 nations agreed in Paris to a climate deal with a goal of cutting greenhouse gas emissions to a net zero by 2100, shifting from fossil fuels in favor of greener energies such as solar and wind power.

Phil Jones, of the Climatic Research Unit at the University of East Anglia, said El Nino seemed less to blame for the current surge than the last big El Nino in 1998.

"Based on 1998, March and probably April will also be very warm, before the El Nino influence wanes," he told Reuters.

Ice in the Arctic Ocean was at the lowest recorded for February, the U.S. National Snow and Ice Data Center said.

At Longyearbyen, on a Norwegian Arctic island, temperatures hit a peak of 6.6C (44F) on Jan. 2, against an icy average for a normal January of -15.3C (4.5F), data from the Norwegian Meteorological Institute showed.

Reidun Skaland, a climate expert at the Institute, said there were always big swings in Arctic weather, "but it is a warning message when you see such high temperatures. There's an increasing trend."