RENEWABLES MADE UP HALF OF NET ELECTRICITY CAPACITY ADDED LAST YEAR... 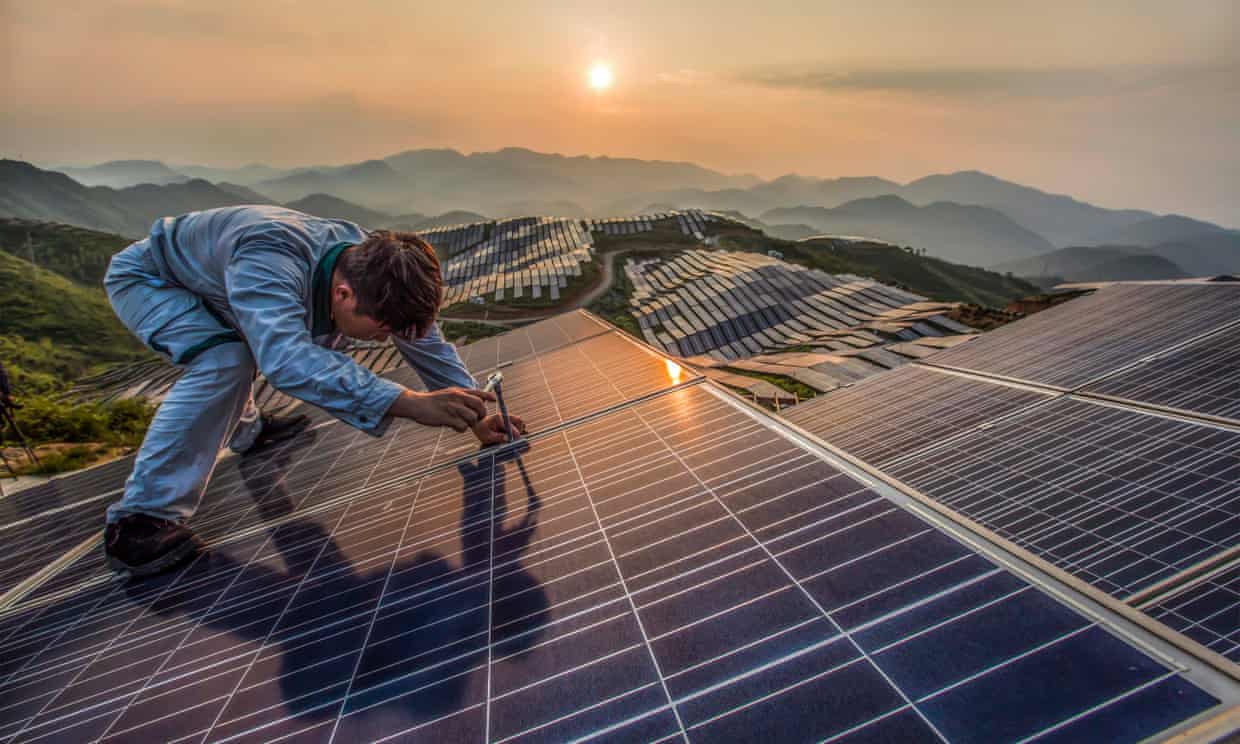 A worker at Xinyi photovoltaic power station in Songxi, China. China will lead the world for growth in renewable power, the IEA has predicted. Photograph: Feature China / Barcroft Images

Experts hail rapid transformation that will see clean energy outgrow fossil fuels in the next five years - but warn UK is failing to exploit huge potential...

Green energy accounted for more than half of net electricity generation capacity added around the world last year for the first time, leading energy experts have found.

The International Energy Agency (IEA) said the milestone was evidence of a rapid transformation in energy taking place, and predicted capacity from renewable sources will grow faster than oil, gas, coal or nuclear power in the next five years.

But the analysts said the outlook in the UK has deteriorated since the Conservative government took power last year and cut support for wind and solar power. The agency’s chief said Britain had huge renewable energy potential and ministers needed to design stronger policies to exploit it.

“What I see is we are witnessing the transformation of energy system markets led by renewables and this is happening very quickly,” said Dr Fatih Birol, executive director of the IEA. “This transformation and the growth of renewables is led by the emerging countries in the years to come, rather than the industrialised countries.”

China will lead the world for growth in renewable power, followed by the US and Europe, a new report by the agency found. The IEA said the EU was relinquishing its position as a renewable energy pioneer due to weak electricity demand and policy uncertainty, which Birol warned could see European renewable energy manufacturers lose out to international rivals.

“If you think of running a marathon, Europe started with a big advance, more than half of the marathon they are leading by far. They are now getting a bit tired, and some others are overtaking Europe slowly but surely,” he told the Guardian.

The IEA said Asia will be the “engine of growth”, led by China and India. “China is a completely separate chapter,” said Birol. “China alone is responsible for about 40% of growth in the next five years. When people talk about China, they think about coal, but it is changing.”

A total of 153GW of net renewable electricity capacity was installed globally in 2015, a record high, equivalent to Canada’s capacity and up 15% on the year before. Net capacity is new capacity minus retired capacity, such as old hydro being taken offline. China is expected to add a further 305GW over the next five years, followed by India with 76GW.

Onshore windfarms and solar power led the charge last year, with 63GW and 49GW of new global capacity respectively. The two technologies are also forecast to take the lion’s share of growth, with electricity generation from solar tripling and wind doubling.

Their costs are expected to continue the dramatic and unprecedented reductions in recent years, with onshore wind coming down a further 15% and big solar 25% by 2021.

“The cost of wind dropped by about one third in the last five to six years, and that of solar dropped by 80%,” said Birol, adding that while the cost of gas had also fallen recently, it was not at the same speed that green energy had become cheaper. “The decline in renewables [cost] was very sharp and in a very short period of time. This is unprecedented.”

While renewables now account for more than 50% of net capacity additions and are expected by the IEA to reach around 60% by 2021, they still provide a relatively small share of the world’s electricity. Green sources are only expected to provide 28% of electricity generation by 2021, up from 23% in 2015, and much of that will be from existing hydropower dams.

Renewable energy is seen by scores of countries as a key way to meet climate targets that they pledged under the Paris agreement, which comes into force in November.

But even with the huge growth expected in coming years, the IEA said it will not be sufficient to meet the Paris deal’s target of keeping temperatures below 2C, the threshold for dangerous warming. “No, it’s by far not enough [the trajectory of growth],” said Birol.

The agency painted a gloomy picture of solar and onshore wind’s prospects in the UK, echoing recent warnings from other respected energy authorities. “The policy landscape for renewables has become more challenging since the 2015 general election,” the report said.

Since coming to power, the Conservatives have drastically cut or ended subsidies for wind and solar power, begun the privatisation of the green bank which supports clean energy, and enthusiastically backed fracking for shale gas and new nuclear. “While government support for new gas and nuclear capacity is evident, recent policy changes indicate that the role envisioned for renewables is uncertain,” the IEA said.

“There is need in the UK to invest in stronger renewable policies,” said Birol. “The potential is huge compared to what we are expecting.”

The agency’s chief said that contrary to what renewable energy critics argued, the biggest threat to the technologies was not their intermittent nature but the intermittency of governments’ support.

Imke Lübbeke, head of climate and energy at WWF’s European policy office, said: “The IEA report clearly shows that president [Jean-Claude] Juncker’s promise to make the EU ‘the world leader in renewables’ remains empty rhetoric. Instead, the European Union is losing its leadership role to the US and China.”