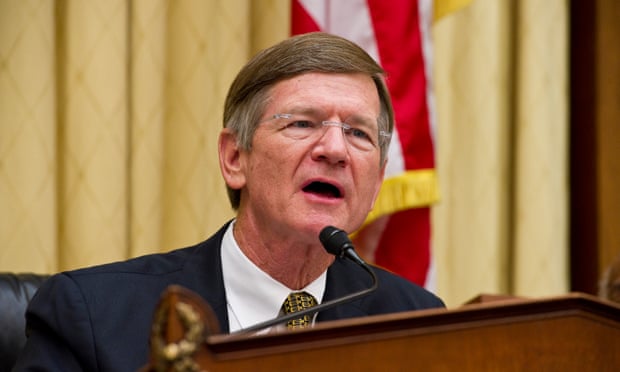 As usual, cherry picking and misrepresentations are used to oppose climate policies...

There’s a chart that’s become the favorite, go-to among those who distort climate science in order to justify opposition to climate policies. It’s shown up in many conservative media outlets like The Wall Street Journal and The Australian. It’s been presented by congressional Republicans’ favorite climate witness, John Christy, in recent hearings called by Ted Cruz and Lamar Smith.

The chart, which tries to compare estimates of the temperature of the Earth’s atmosphere to model simulations, is full of problems. Its purpose is clear – to make it appear that climate models are unreliable, and thus cast doubt on all of climate science and the tremendous risks posed by human-caused global warming. In other words, its purpose is to undermine climate policy efforts to reduce those risks by slowing global warming.

But as with all charts of such singular, unscientific purposes, it’s simply another example of cherry picked data being presented in a multiply misleading way, as the annotated version below illustrates (for an animated version, click here). 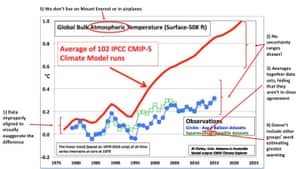 1) The data are misleadingly misaligned

To start, the observational and simulated model data are aligned at a single point at the start of the graph, in 1979. That choice serves to visually exaggerate any difference between the models and data. When doing this sort of comparison properly, climate scientists will average the data over a period called the “baseline,” usually between 10 and 30 years, so that any abnormally hot or cold single years in the data or model runs don’t throw off the alignment.

In fact, there was recently a paper published by Hawkins & Sutton showing that the choice of baseline can significantly impact how accurate the models appear in this sort of comparison, and thus it’s important to carefully choose an appropriate baseline period and perhaps test the comparison with multiple different periods. Christy didn’t even use a baseline period to begin with! NASA Goddard director Gavin Schmidt did the comparison using a baseline period of 1979–1988, and as you can see, the result looks quite different. 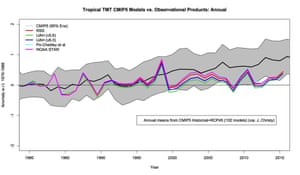 Temperature of the atmosphere to the mid-troposphere in the tropics, comparing model simulations (gray envelope) to observational estimates from satellites (colored lines). Illustration: Gavin Schmidt

2) The uncertainty is ignored!

Normally, climate contrarians love to harp on uncertainties. In fact, the whole argument against implementing climate policies to slow global warming hinges upon the backwards logic that we don’t know enough to take action.

However, in Christy’s chart, no uncertainty ranges are shown whatsoever. The difference this makes is clear in Schmidt’s version above, which shows the spread of individual climate model simulation runs (in grey), although doesn’t show the significant uncertainty in the observational data. When both are taken into account, the observations are consistent with the range of model projections.

Christy’s graph also averages together multiple different observational data sets, which aren’t in terribly close agreement. Gavin Schmidt shows some of these in his version of the chart. Christy’s version also somehow glosses over the fact that atmospheric temperature estimates from satellites and weather balloons diverge in recent years.

Another problem is that Christy doesn’t say which observational data sets he’s averaging together, but there are more than three groups that use satellite data to estimate the temperature of the atmosphere (Schmidt shows four of them in his chart). So he could be omitting some of the data that shows larger warming trends.

We don’t know because this is “blog science.” The analysis hasn’t been vetted by other experts, or published in a scientific journal after being subjected to peer-review. We don’t even know if Christy is accurately representing the climate models, because they don’t produce a simple “bulk atmosphere temperature” output. As such, Christy’s chart should be taken with a grain of salt.

5) We don’t live on Mount Everest

The average elevation of the “bulk atmosphere” shown in Christy’s graph is 25,000 feet, which is just below the peak of Mount Everest, and not far below the elevation at which commercial aircraft generally fly. The temperature at such high elevations isn’t very relevant to humans. 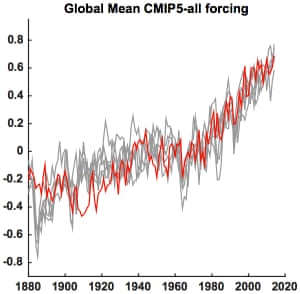 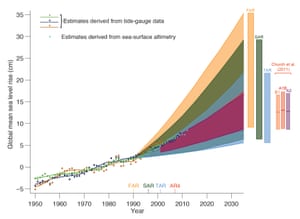 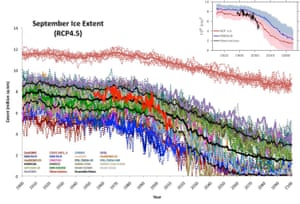 And then there’s ocean heating. Only about 1–2% of the energy imbalance causing global warming goes into warming the atmosphere, and only about 3% is used up melting ice. Over 90% of that energy goes into warming the oceans. And climate models are doing a very good job predicting the rate at which the oceans are heating up (e.g. see Cheng et al. 2015). 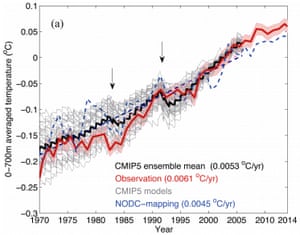 As the statistician George Box said, “all models are wrong, but some are useful.” Climate models are certainly useful, and are doing a pretty darn good job predicting global warming. Their predictions have been far more accurate than those made by climate contrarians, who keep telling us that the Earth will start to cool any day now, as we keep breaking heat records.

The only reason to focus on the temperature of the atmosphere, most of which is far above where humans actually live, which we can’t measure as accurately, and which only accounts for about 1–2% of overall global warming, is because it’s the only data that seems to indicate that climate models might not be accurate. That’s called cherry picking. And even then, to make that argument requires presenting the data in a multiply flawed, misleading way.

Climate models are doing a good job because we understand basic physics. We know that as we keep increasing the greenhouse effect, more heat will be trapped, and the planet will keep warming. Ice will keep melting, sea levels will keep rising, and various bad things will happen, because we’re warming the planet much faster than it does naturally. That’s a dangerous physical reality we can’t escape just by creating cherry picked, misleading charts.