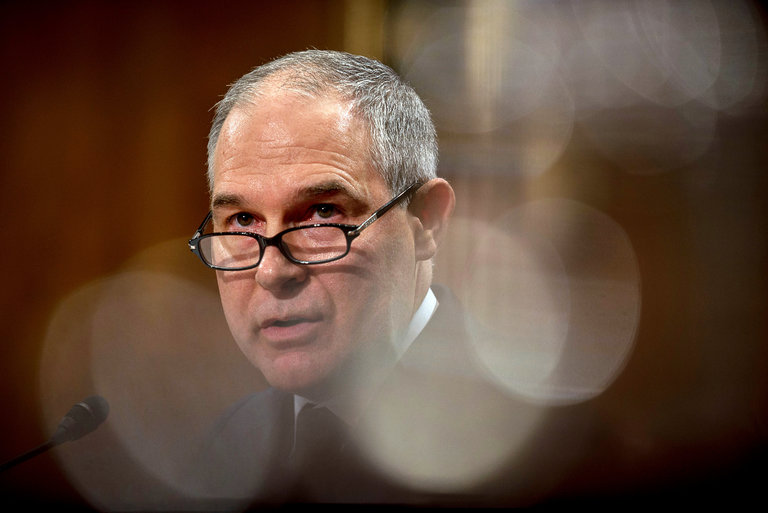 Scott Pruitt, President Trump’s nominee for administrator of the Environmental Protection Agency, answers questions from senators during a confirmation hearing in January. Credit Gabriella Demczuk for The New York Times

But the public began to notice the heat waves and the torrential rains and the tidal flooding. So then we had the “I am not a scientist” phase, with one lawmaker after another fending off climate questions with that formula.

That drew such ridicule that Republicans critical of climate science had to come up with a more nuanced answer. Several variations on the new approach were on display recently during confirmation hearings for some of President Trump’s cabinet nominees.

“Science tells us that the climate is changing and human activity in some manner impacts that change,” Scott Pruitt, the Oklahoma attorney general nominated to run the Environmental Protection Agency, told a Senate committee. “The human ability to measure with precision the extent of that impact is subject to continuing debate and dialogue, as well they should be.”

Let us ponder the craftsmanship of that second sentence.

“With precision” is the key phrase, of course, and it renders the statement almost axiomatically true. Do we have trouble taking the precise temperature of an entire planet and then divining, for a given period, exactly how much of the change in that temperature is caused by human activities?

Anybody who did not know better might come away thinking there is room to doubt whether humans are the main cause of global warming. Mr. Pruitt did not actually say that, of course — nowadays, hard-core climate denial provokes a furious response from Democrats in Congress and mild protest even from a few Republicans.

Thus Mr. Pruitt and the other Trump nominees labored to avoid overt denial while signaling to their allies that there is enough doubt to justify inaction on emissions or even rolling back steps the Obama administration took.

“They’re just trying not to look crazy, because if they look too crazy, then Susan Collins” — a Republican senator from Maine — “and a few of the moderate Republicans might jump ship,” said Raymond T. Pierrehumbert, an American climate scientist who holds a chair at Oxford University, in Britain.

In interviews, Dr. Pierrehumbert and several other experts said the public should not be fooled. The deep consensus among climate scientists, arrived at through decades of research, is that human activity is the cause of most of the planetary warming of recent decades, and probably all of it.

What is the evidence?

For starters, an unassailable body of physics tells us that if you add carbon dioxide and other greenhouse gases to the atmosphere, they will trap extra heat near the surface of the planet, a prediction so basic it was first made in the 19th century.

“People have been trying, but nobody has really shaken the foundations of the theory in all that time,” Dr. Pierrehumbert said.

Emissions have soared in the modern era, and as predicted, the Earth is heating up. That would be obvious just from all the land ice that is melting, but of course, we have had thermometers for centuries now. They show that the Earth has warmed roughly 2 degrees Fahrenheit since the late 19th century, a large number for the surface of a planet.

With just those facts, you have a powerful circumstantial case that human activities are the cause of global warming. But we have more: Sophisticated computer analyses of the climate confirm it, finding that no factor other than the human release of greenhouse gases is large enough to explain the recent warming.

What are the soft spots in the theory?

The biggest is that natural factors could in principle be causing the climate to change, as Mr. Pruitt implied. Suppose, for example, that the sun were to start putting out a lot more radiation; that would definitely warm the Earth.

But we have satellites keeping a close eye on the sun, and it has not changed nearly enough to be the culprit. Scientists have looked closely at all the possible natural factors, in fact, and they are not adequate to explain the warming.

“Of all the natural drivers, and everything we know that works on long time scales that has ever affected climate in the past, all those things have been ruled out,” said Drew Shindell, an atmospheric scientist at Duke University. “Beyond a reasonable doubt, it has to be human activities.”

The most important uncertainties are not really about the cause of global warming — we are the cause — but in trying to forecast how big the coming changes will be.

If emissions continue at a high level but the Earth turns out to be less sensitive to greenhouse gases than currently believed, that would give humanity a few extra decades to come to grips with the situation. But it is not a get-out-of-jail-free card: If we keep burning fossil fuels in that time, scientists say the planet will still undergo profound, threatening changes.