OPENING IN THEATERS TODAY! REVIEW: ‘AN INCONVENIENT SEQUEL,’ WITH AL GORE KEEPING THE PRESSURE ON... 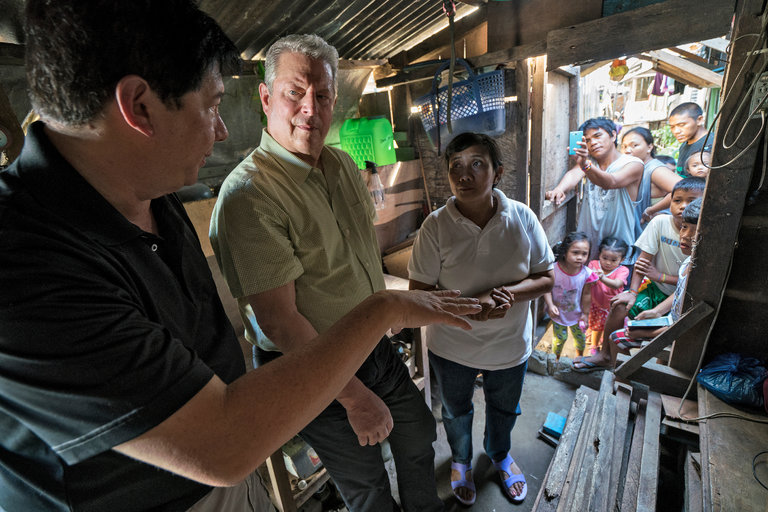 In a summer movie landscape with Spider-Man, a simian army waging further battle for the planet and Charlize Theron as a sexy Cold War-era superspy, it says something that one of the most compelling characters is Al Gore...

An Inconvenient Sequel: Truth to Power

“An Inconvenient Sequel: Truth to Power,” a follow-up to “An Inconvenient Truth,” Davis Guggenheim’s Oscar-winning documentary from 2006, is a reboot that justifies its existence — and not just because Mr. Gore has fresh news to report on climate change since his previous multimedia presentation played in multiplexes.

Now gray-haired and at times sounding angrier in his speeches, Mr. Gore, in “Sequel,” takes on the air of a Shakespearean figure, a man long cast out of power by what he casually refers to as “the Supreme Court decision” (meaning Bush v. Gore) but still making the same arguments that have been hallmarks of his career.

If there is a thesis in this new documentary, directed by Bonni Cohen and Jon Shenk (“Audrie & Daisy”), it’s that a rise in extreme weather is making the impact of climate change harder to deny. The movie touches on Hurricane Sandy, Typhoon Haiyan in the Philippines, the wildfire in Fort McMurray, Canada, and the Zika virus. Mr. Gore visits Greenland and the flooded streets of the Miami area. (He acknowledges a complicated relationship with Florida.)

“The dots are seldom connected in the media,” he says at one point, but events like these are symptoms of global warming.

As positive developments, he notes the 2015 launch of the Deep Space Climate Observatory satellite, and visits a small city in Texas whose Republican mayor has decided that renewable energy makes market sense.

When you purchase a ticket for an independently reviewed film through our site, we earn an affiliate commission. But our primary goal is that this feature adds value to your reading experience.

“An Inconvenient Sequel” delves deeper into the arcane details of compromise than its predecessor, with scenes of Mr. Gore working to find a middle ground between the needs of developed and developing nations. In a group meeting, Piyush Goyal, India’s power minister, pushes back against Mr. Gore’s desire to replicate in India the expanded use of solar energy in the United States. “I’ll do the same thing after 150 years,” Mr. Goyal replies.

During the 2015 Paris Climate Change Conference, Mr. Gore, who wasn’t an official negotiator, tries to persuade Lyndon Rive, then chief executive of the American company SolarCity, to grant India the rights to a patent on a type of solar technology. (The results aren’t clear from the film; India signed on to the Paris agreement without making a deal with SolarCity and still hasn’t made one.)

Mr. Gore likens President Trump’s election to a quip often attributed to Mike Tyson: You always have a plan until you get punched in the face. The movie has been updated since its premiere at the Sundance Film Festival in January to include Mr. Trump’s announcement of the United States’ withdrawal from the Paris climate accord, a decision that probably forecasts another sequel.

An Inconvenient Sequel: Truth to Power