RIGHT-WING MEDIA COULD NOT BE MORE WRONG ABOUT THE 1.5°C CARBON BUDGET PAPER... 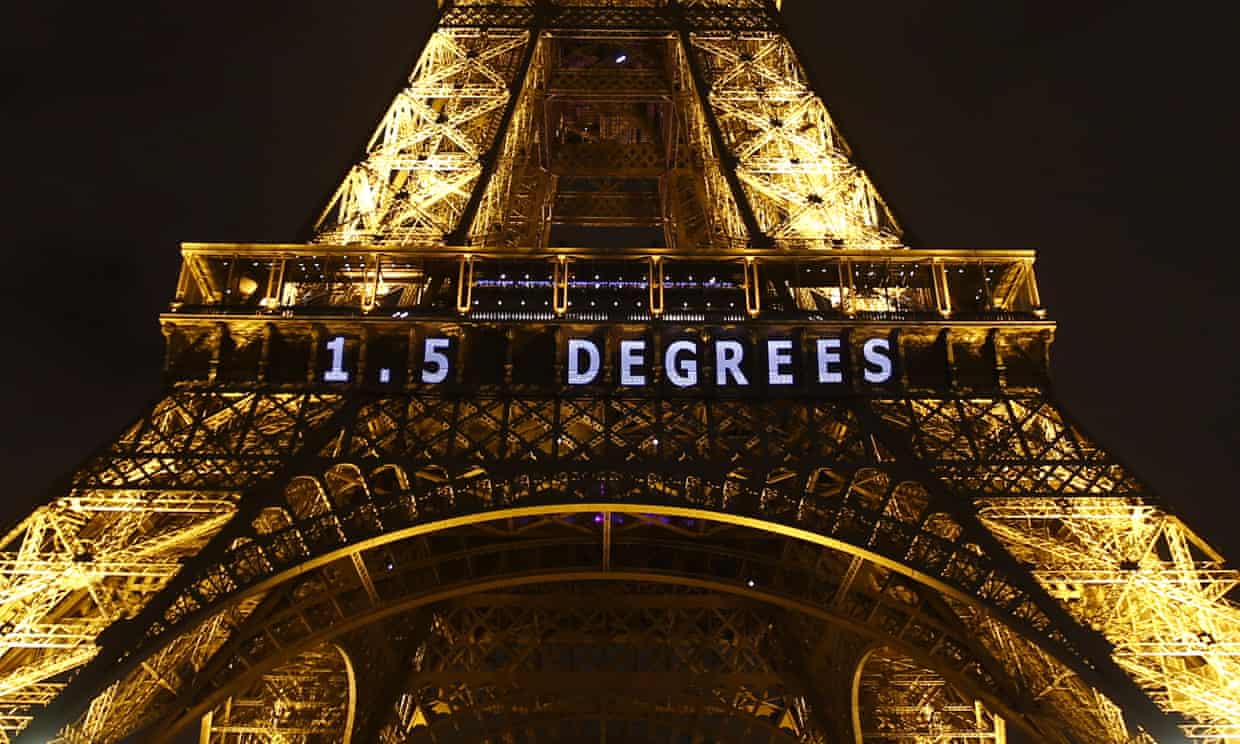 Last week, Nature Geoscience published a study suggesting that we have a bigger remaining carbon budget than previously thought to keep global warming below the 1.5°C aggressive Paris climate target. Many scientists quickly commented that the paper’s conclusion was based on some questionable assumptions, and this single study shouldn’t be blindly accepted as gospel truth.

Conservative media outlets did even worse than that. They took one part of the paper’s analysis out of context and grossly distorted its conclusions to advance their anti-climate agenda.

The study used the UK Met Office and Hadley Centre’s HadCRUT4 global temperature data set to conclude that so far we’ve warmed 0.93°C from the mid-1800s to 2015, compared to the Paris target of 1.5°C above pre-industrial temperatures. Several climate scientists immediately noted a problem here – HadCRUT4 excludes the Arctic region, which is the fastest-warming part of the planet. Hence it’s one of the least globally-representative temperature datasets. According to more globally-complete data sets like Berkeley Earth, the warming we’ve seen is closer to 1.1°C. 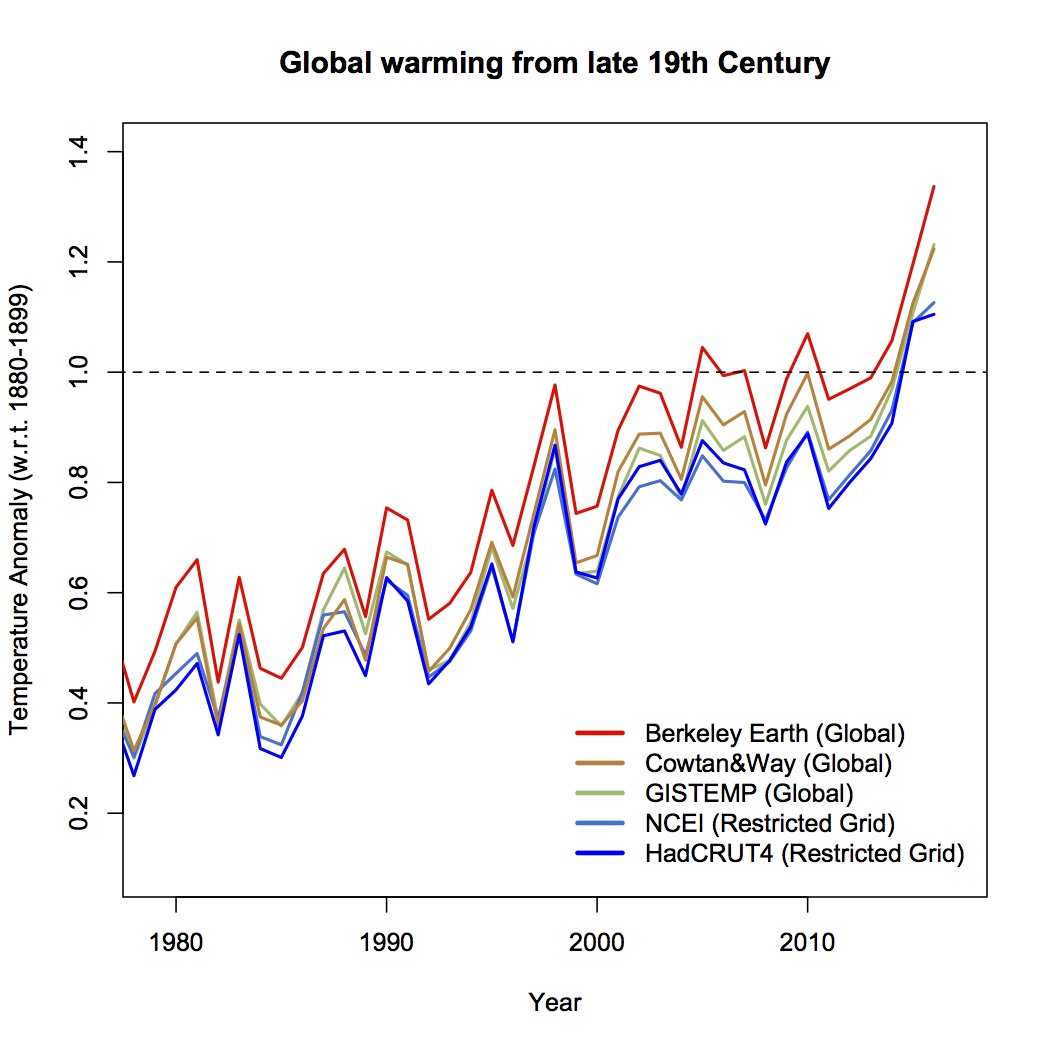 Headline claim from carbon budget paper that warming is 0.9ºC from pre-I is unsupported. Using globally complete estimates ~1.2ºC (in 2015)

Defining “pre-industrial temperatures” is another issue. Humans caused some global warming prior to the mid-1800s; as one recent study showed, as much as 0.2°C.

A third problem discussed by climate scientists Stefan Rahmstorf at RealClimate involves the way the study authors defined the budget itself. They looked at how much carbon will be emitted at the time we reach 1.5°C warming, but because of what’s known as the ‘thermal inertia’ of the oceans, and because sunlight-reflecting pollutants will fall out of the atmosphere as we shift away from dirty coal power, the planet will keep warming after that time.

If we take all these factors together, depending on how we decide to define “pre-industrial” in the Paris target, we may in fact already be committed to 1.5°C warming, and the headline conclusion that “the 1.5C warming limit is not yet a geophysical impossibility” may be incorrect.

But ultimately that’s a relatively unimportant point. Even if limiting global warming to 1.5°C is still technically feasible, it will take immense global action to achieve it. If it’s infeasible, we still need immense global action to try and stay below 2°C, or 2.5°C, or to slow global warming as much as possible to avoid catastrophic consequences.

From a real-world policy perspective, we need all hands on deck whether the conclusions of this paper are right or wrong.

Of course, many conservatives who want to maintain the status quo object to that reality. As we saw with the recent Ipso ruling, many right-wing media outlets will jump at any opportunity to misrepresent climate research in order to advance the climate denial agenda.

Unfortunately, Ben Webster of the London Times appears to have misunderstood co-author Myles Allen’s explanation of their study, and quoted him as saying:

Many climate scientists immediately pointed out this assertion is false. The UK Met Office noted, “The observations lie comfortably within the modelled range.” 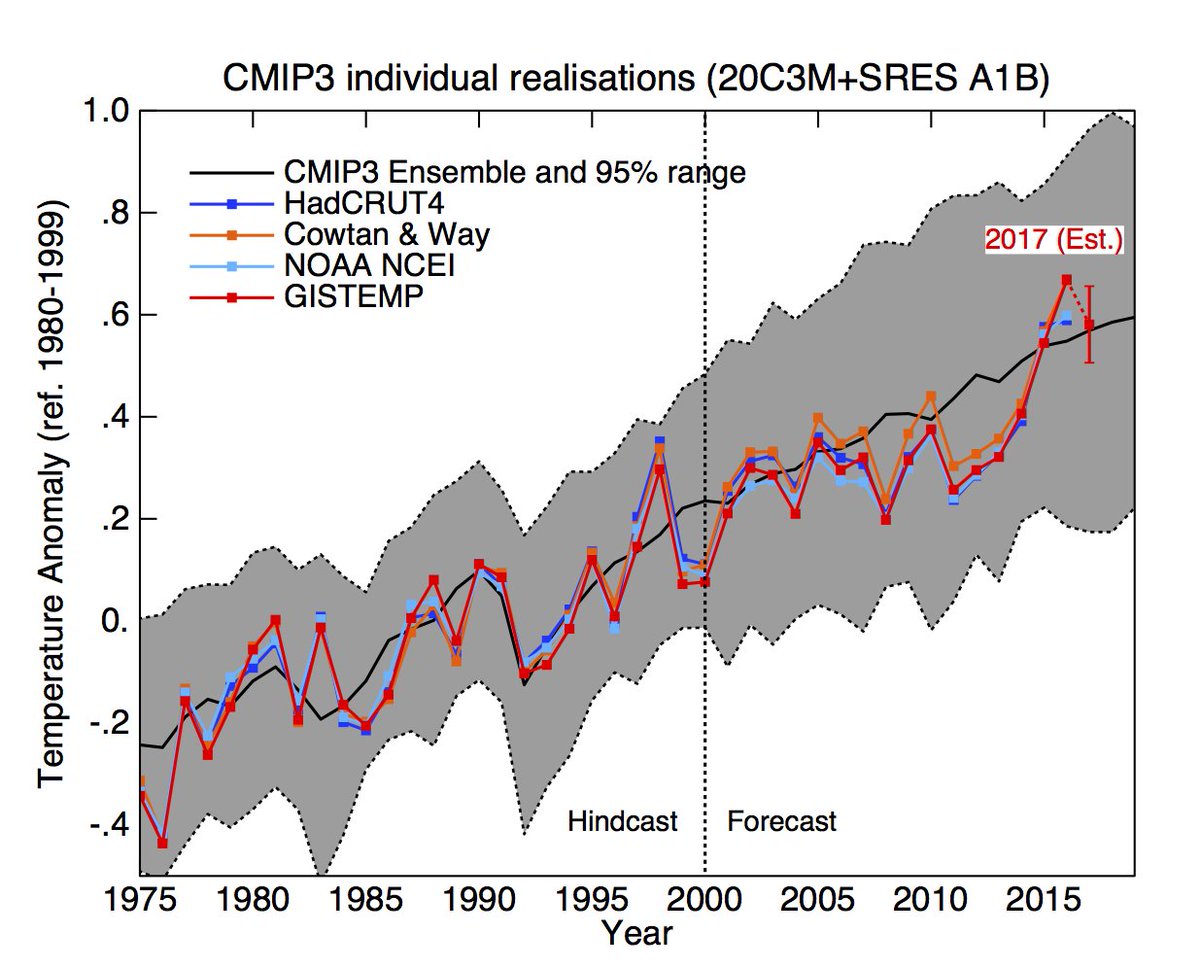 Claim of a substantial gap between model projections for global temperature & observations is not true (updated with 2017 estimate):

The Daily Mail (reliable only for its unreliable climate reporting) subsequently claimed that the paper showed climate models had overestimated temperatures by ‘at least’ 0.3°C, and quoted Allen calling this “a big deal,” although the context of that quote was conveniently omitted. In a subsequent fact check at Carbon Brief, Zeke Hausfather detailed the many misunderstandings that led to this false conclusion. As fellow study co-author Piers Forster told Carbon Brief:

I think some press reporting is misleading as our paper did not assess climate impacts or climate model performance. Rather, our paper confirms the need for much increased urgent action from around the world if society stands a chance of limiting warming to 1.5C.

Myles Allen and study lead author Richard Millar took to The Guardian to criticize the conservative media outlets that had misrepresented their research. I spoke to Allen, who clarified that he was trying to explain that temperatures didn’t seem to be responding to carbon emissions as fast as the models used in the last IPCC report anticipated. Except the reasons for that have already been identified - the actual global energy imbalance hasn’t been as large as in the scenarios input into the climate models, and we have to compare apples-to-apples temperatures. As Allen and Millar wrote in The Guardian:

the IPCC specifically assessed that temperatures in the 2020s would be 0.9-1.3C warmer than pre-industrial, the lower end of which is already looking conservative. Anyone who had troubled to read our paper would have found this “IPCC AR5 Ch11 projection” helpfully labelled on two of our figures, and clearly consistent with our new results.

It appears that Ben Webster didn’t understand Allen’s explanation, and Allen was perhaps a bit careless with some of his words. As a result, Webster quoted Allen saying the models were running too hot. Conservative ‘journalists’ and opinion writers saw that seemingly juicy quote and without speaking to Allen or any other climate scientists, ran with it, completely distorting the actual findings of the paper in the process.

It’s been clear for years that conservative media outlets thrive on any comments from climate scientists that can be construed as supporting climate denial myths (model reliability being among the most popular myths). It’s unfortunate that climate scientists have to be so careful about what they say, but that’s the reality we live in. Biased conservative media outlets aren’t interested in accurately reporting scientific findings; they’re interested in advancing the climate denial agenda of manufacturing doubt in order to erode public support for climate policies. And so the grossly misleading ‘alarmist scientists admit they were wrong’ story was echoed by Breitbart, the Daily Mail, the Sun, the Herald Sun, Fox News, the Daily Caller, and many more.

We’re running out of time to curtail climate damages

The primary conclusion of the study was that if the international community acts extremely aggressively to cut carbon pollution, it might still be possible to meet the Paris 1.5°C target. That conclusion may or may not be true, but if we listen to the conservative media and continue on our current path, there’s no chance we’ll stay below 1.5 or 2°C. Even with the current international climate pledges we’re on a path toward 3°C or more global warming.

While it’s nice to know if the most hopeful targets are still a geophysical possibility, we need much more aggressive climate policies if they’re to become a practical and political possibility. And biased media outlets will always happily distort the science in order to obstruct those policies.