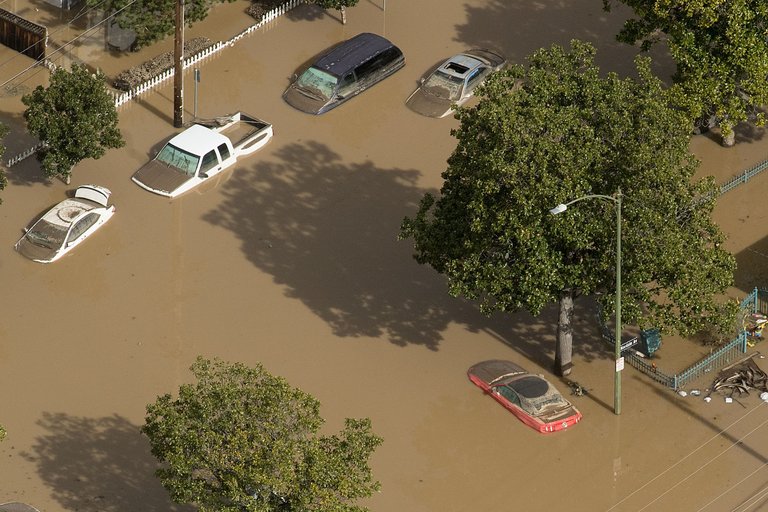 Even more than politics, all weather is local. So, while most of the nation basked in record warmth this week, the West Coast was battered again by a system carrying enough water vapor to equal the flow of about 10 Mississippi Rivers...

The storm was the latest hydraulic dump from an “atmospheric river,” a term usually tossed around only by weather nerds like myself, but now part of daily conversations on the West Coast. These airborne streams originate in the Pacific, sometimes 300 miles wide and up to 2,000 miles in length, and become biblical downpours once they collide with coastal mountains.

The result is what you saw on the nightly news: dams falling apart, bridges cracking, highways under water, houses sliding down hillsides, gusts topping 190 miles an hour, and people trying to find their way through San Jose, Calif., in rescue boats. Snow in the Sierra is at Donner Party depths — 53 feet has fallen at Mount Rose, for example.

But wait — isn’t all this water from bruised skies a good thing? Didn’t California just go through an existential drought for the ages? Is that the same governor, the unsinkable Jerry Brown, who ordered water rationing two years ago, now requesting a federal emergency to deal with too much water?

Yes, and it’s all connected. What we saw over the last seven years — a drought that brought California to its knees, followed by what could be the wettest year on record — is in the climate forecast models of the future. California, and the rest of our poor, fragmented country, is a crippled tangle of old-century solutions to a turbulent new world.

Yesterday’s dams are trying to hold back tomorrow’s climate. And what are we doing about it? We’re building a wall along the Mexican border to fix a problem that’s already taken care of itself. A wall that could cost upward of $30 billion.

After the latest storm, at Big Sur along the road that hugs perhaps the most beautiful coastline in the world, large cracks forced the shutdown of the Pfeiffer Canyon Bridge section of Highway 1. It’s now listed as beyond repair. At least the fracture was noticed before cars tumbled into the ravine. An additional 2,000 bridges in California are considered structurally deficient.

This is the state that gave us Golden Gate Bridge, that sublime masterpiece, that engineering marvel — built during the Great Depression. As bread lines formed in cities and one in four adults were out of work, we constructed Hoover Dam, pinching the Colorado River, and Grand Coulee Dam, backing up the mighty Columbia.

We built bridges and roads and dams to make life easier, to light cities, to invest in tomorrow. Grand Coulee’s original project name was the Planned Promised Land — a Pacific Northwest Eden for all those Dust Bowl refugees.

In the 1950s, under President Dwight Eisenhower, we constructed an Interstate highway system that was the envy of the world. It connected red states to blue, prairie to mountain. It was all part of the American Century. And you can trace some of that farsightedness to the Brooklyn Bridge, built after the United States tore itself apart in the Civil War.

Now, the focus is on a useless wall to salve the delusions of a ranting demagogue. It would be fitting if the only infrastructure legacy of the Donald Trump era was something that did not bring water to a desert, or span a gaping chasm, or electrify a rural state, but was an ugly barrier sending this message: Keep out.

On top of that, Trump is taking measures to ensure that the climate gets ever more erratic, ordering federal agencies to allow major polluters to spit more greenhouse gas emissions into the atmosphere.

It’s no secret that the physical foundation of the country is falling apart. During the campaign, Trump promised a $1 trillion infrastructure investment. That amount was cut in half in the transition. And now it looks like the administration will propose nothing for this year — kicking the can down the road till 2018, if ever.

Their plate is full. In other words, the administration is too busy trying to take away people’s health care, rounding up immigrants and preparing a tax cut to treat our broken system like the national emergency it is.

Well, surely Congress will act. I’m kidding, of course. For Republicans on the Trump train, America First is something you shout at foreigners, not a design for a better country. Republicans hated President Obama’s injection in 2009 of much-needed financial support for all the bandaged bridges across the fruited plain.

And a huge new investment would surely require the one thing that Republicans hate most: a tax increase.

So, we look to the skies, and pray, or curse, or cower. The next big storm isn’t expected to hit California until Sunday. It’s their problem, right? Not for long. All weather is local, until it isn’t.