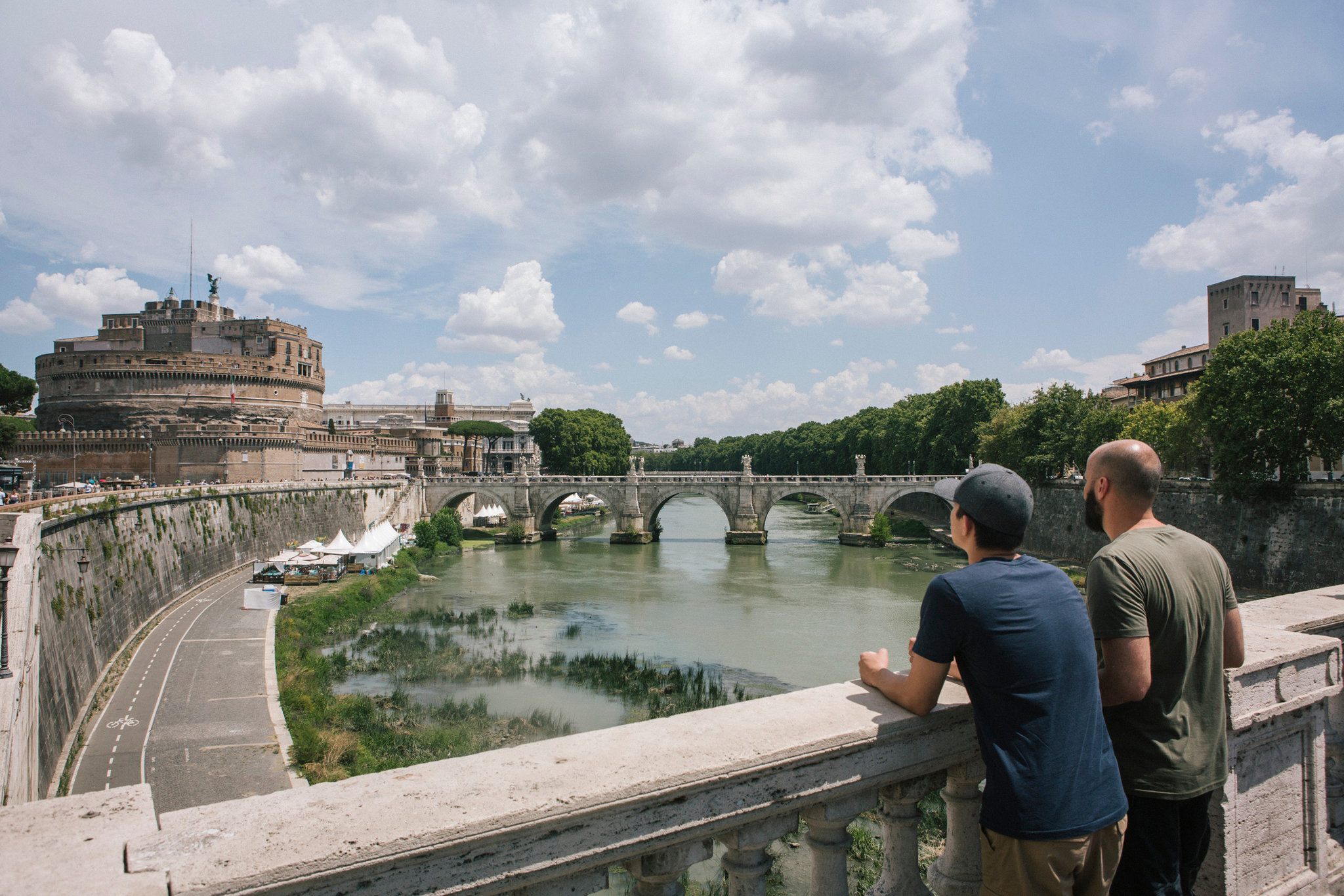 Drought has lowered the level of the Tiber River, and Rome officials are considering rationing drinking water. Credit Gianni Cipriano for The New York Times

ROME — Rome’s cold, clean water has flowed through ancient aqueducts, gurgled in baroque fountains and poured incessantly from thousands of the 19th-century spouts that still grace the city streets. For millenniums, water has symbolized Rome’s dominion over nature, its engineering prowess and deep, seemingly inexhaustible spring of good fortune...

“It’s a sign of abundance, but also it’s a sign of power,” said Guido Giordano, a geologist who specializes in water at University Roma Tre. “Since the foundational myth of Romulus and Remus coming from the river, water is inherent to the foundation of Rome.”

And now it is indicative of its latest fall.

A severe drought and sweltering temperatures have led city officials to consider rationing drinking water for eight hours a day for a million and a half Rome residents.

The water crisis has become yet another sign of man being at the mercy of an increasingly extreme climate, but also of once-mighty Rome’s political impotence, managerial ineptitude and overall decline.

Rome’s embattled mayor, Virginia Raggi, has vowed to prevent the rationing, even as smaller towns have already resorted to closing some taps. Ms. Raggi, whose administration has been widely criticized as ineffective, seems aware that depriving Romans of their drinking water could potentially sink her.

Since May, the city-controlled water utility, Acea, has rushed to repair 2,000 of its 7,000 kilometers of water pipes, recovering a hundred liters of water per second.

Even as the Acea website boasts “Roma, Regina Aquarum” (Rome, Queen of the Waters), its system has become so decrepit that about 44 percent of the water is stolen, spills out underground or pools onto the street.

The city has lowered water pressure to aid conservation, forcing residents of top-floor apartments to lug buckets up to their bathrooms and kitchens. “Faucets at risk. A run on bottled water,” news programs have blared. 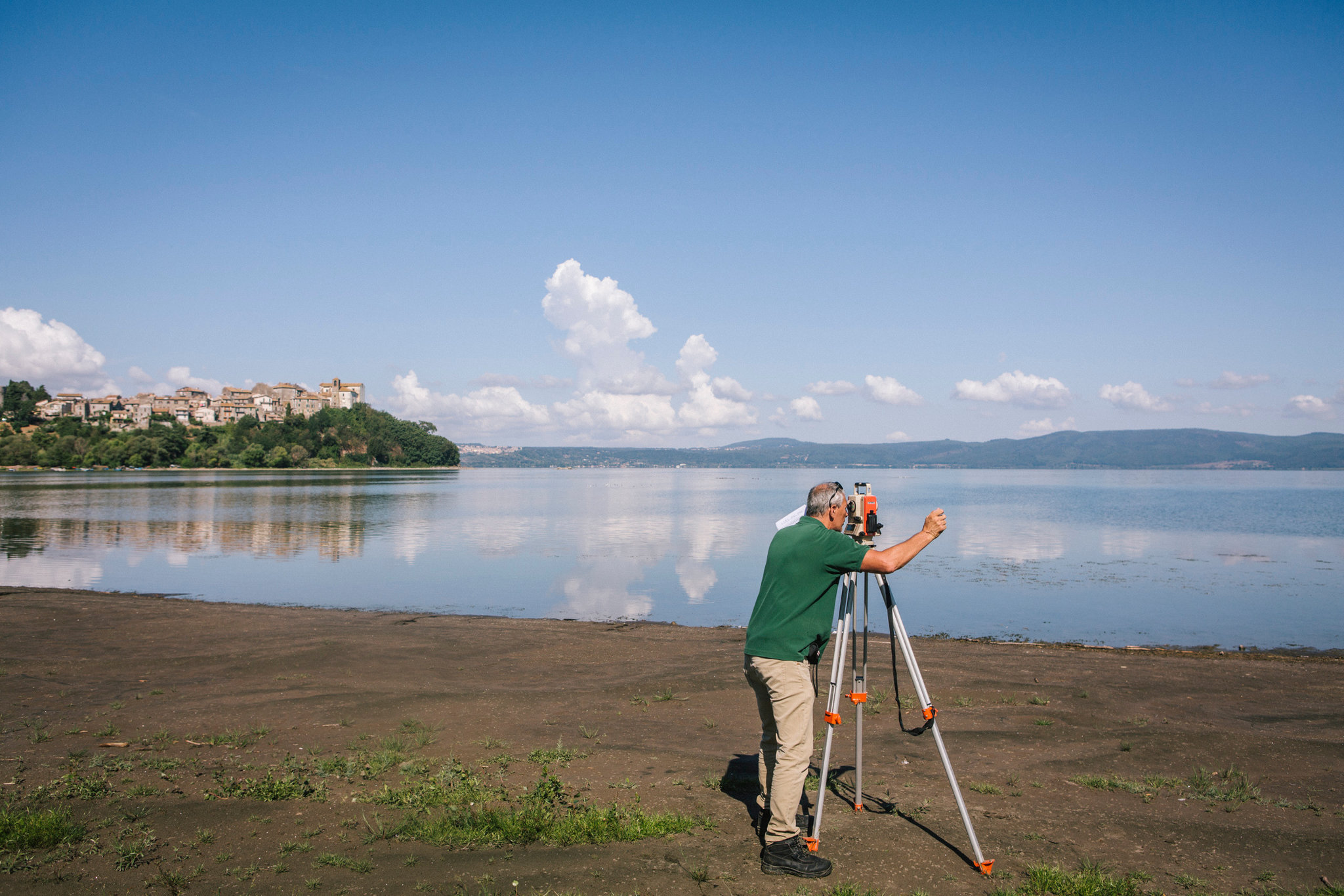 A technician measuring the water level of Lake Bracciano. The lake provides 8 percent of Rome’s water and has sunk nearly five feet. Credit Gianni Cipriano for The New York Times

This week, Italy’s health minister spoke anxiously about the havoc water rationing would wreak on hospitals and the sick. On Thursday, Italy’s minister for the environment appeared in the Senate to express his grave concerns about the drought’s impact on lakes, and suggested that authorities should look into cases of water theft.

On June 22, after criticism of her inaction, Ms. Raggi braved the opposition and decided to start a staggering closure of the 2,500 iconic “nasone” — or big nose — drinking fountains throughout the city. As of Wednesday, she had closed 200 of them, according to the water utility.

The city is also fighting a deadline from the Latium region, to which Rome belongs, to stop draining fresh water from nearby Lake Bracciano. The lake provides 8 percent of Rome’s water and has sunk about 1.5 meters, or nearly five feet.

Wednesday morning, technicians measured the water level in Anguillara Sabazia, a small town bordering the lake. Working under a ruined monument dedicated in the 18th century by Pius XI, the surveyors determined the lake had risen about a centimeter after a Tuesday night rainstorm.

One surveyor shrugged and said the change did not matter, and motioned to the banks around him, where a rowboat was beached on newly exposed earth. “It’s dry,” he said.

Nearby, on a pier, Mauro Noro, 42, cast out his fishing line and said the water was as low as he had ever seen it. “They shouldn’t send anymore water from here to Rome,” he said.

But without Lake Bracciano to help quench the city’s thirst, Ms. Raggi and the water utility are at a loss.

This spring was the second-hottest in the last 60 years, and the driest, with only 26 days of rain compared with 88 in 2016. A recent report by Legambiente, an Italian environmental organization, said that rain had declined 80 to 85 percent in Latium compared with last year. 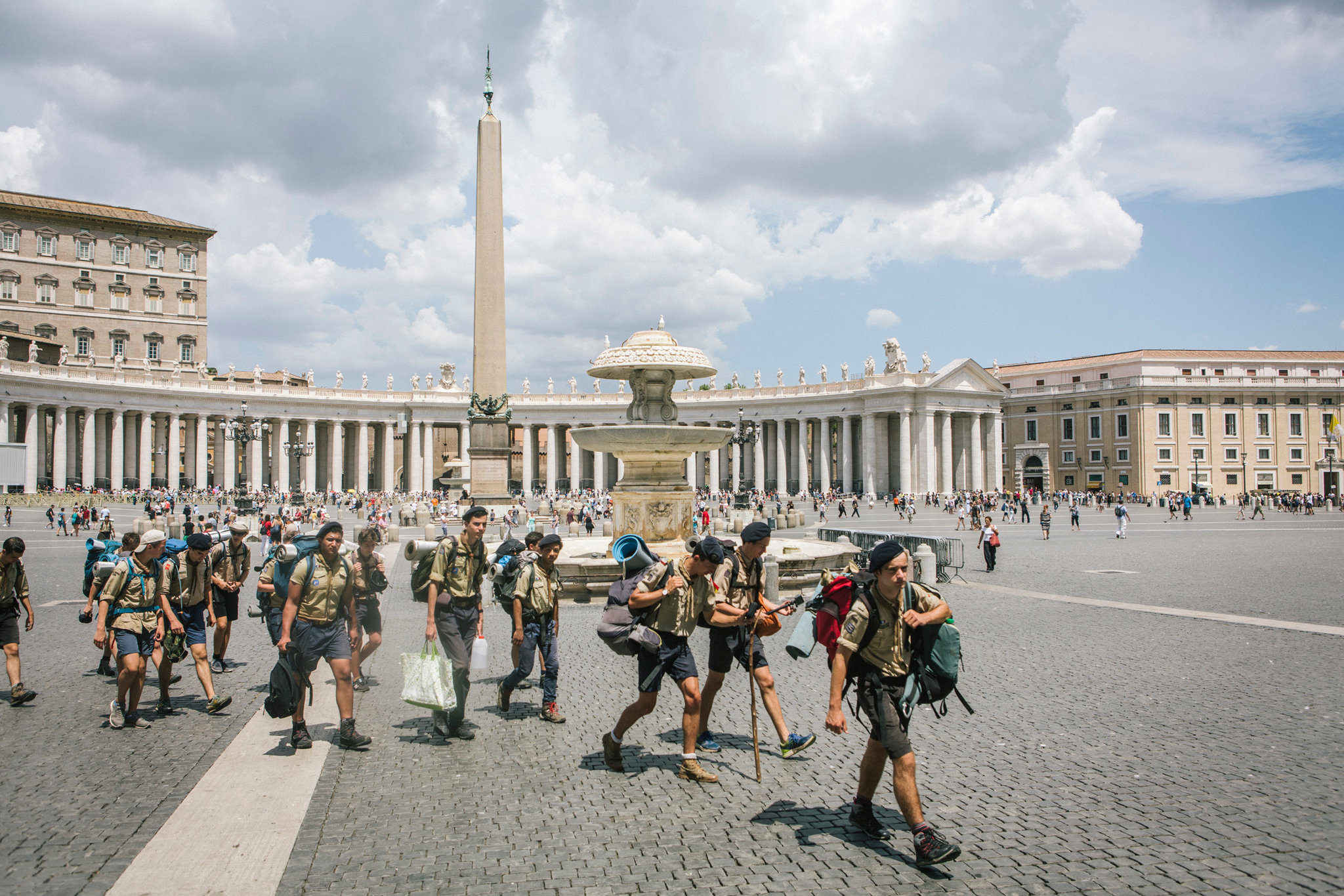 The Vatican decided to cut the water to this 17th-century fountain by Gian Lorenzo Bernini in St. Peter’s Square. Credit Gianni Cipriano for The New York Times

And Latium is far from Italy’s only parched region. Several of Italy’s 20 regions have asked for the declaration of a state of emergency to address deep droughts. The farmers’ association Coldiretti has estimated 2 billion euros’ worth of damage to agriculture.

In May, the regions of Trentino and Veneto in the country’s northeast bickered over water resources. (“The War of Water,” read a headline in the Turin-based La Stampa.)

Some Italians have looked skyward for assistance. This summer, a local agriculture official from Veneto walked from Cittadella to Padova, all the while praying for St. Anthony to open the heavens. In Roscigno Campania, some faithful took the Madonna of Constantinople, known as “the water-making Madonna,” out for a procession.Those prayers have so far not been answered. But the Vatican, for its part, is not letting a good water crisis go to waste.

In an effort to highlight Pope Francis’ emphasis on the environment, the Vatican on Monday began cutting off water to 100 of its fountains, including the famous ones designed by Gian Lorenzo Bernini in St. Peter’s Square.

“It’s not like the Vatican is dying of water problems, but we get the water from the same places Rome gets it from, Lake Bracciano and the aqueducts,” said Greg Burke, the Vatican’s spokesman, who acknowledged that some of the closures were symbolic, as the fountains operated on recycled water.

Making explicit reference to the pope’s encyclical on the environment, “Laudato Si’,” Mr. Burke added, “Sometimes you have to make a sacrifice; that is the message.”

Such sacrifices would have seemed unimaginable a few years ago, or even 2,329 years ago.

In 312 B.C., the city finished the underground Appio aqueduct, and in following centuries, most of the water brought in came from groundwater within a 25-mile radius. The aqueducts poured 186,666 gallons of water a minute into the city, serving more than a million people, according to “The Seven Hills of Rome: A Geological Tour of the Eternal City.” 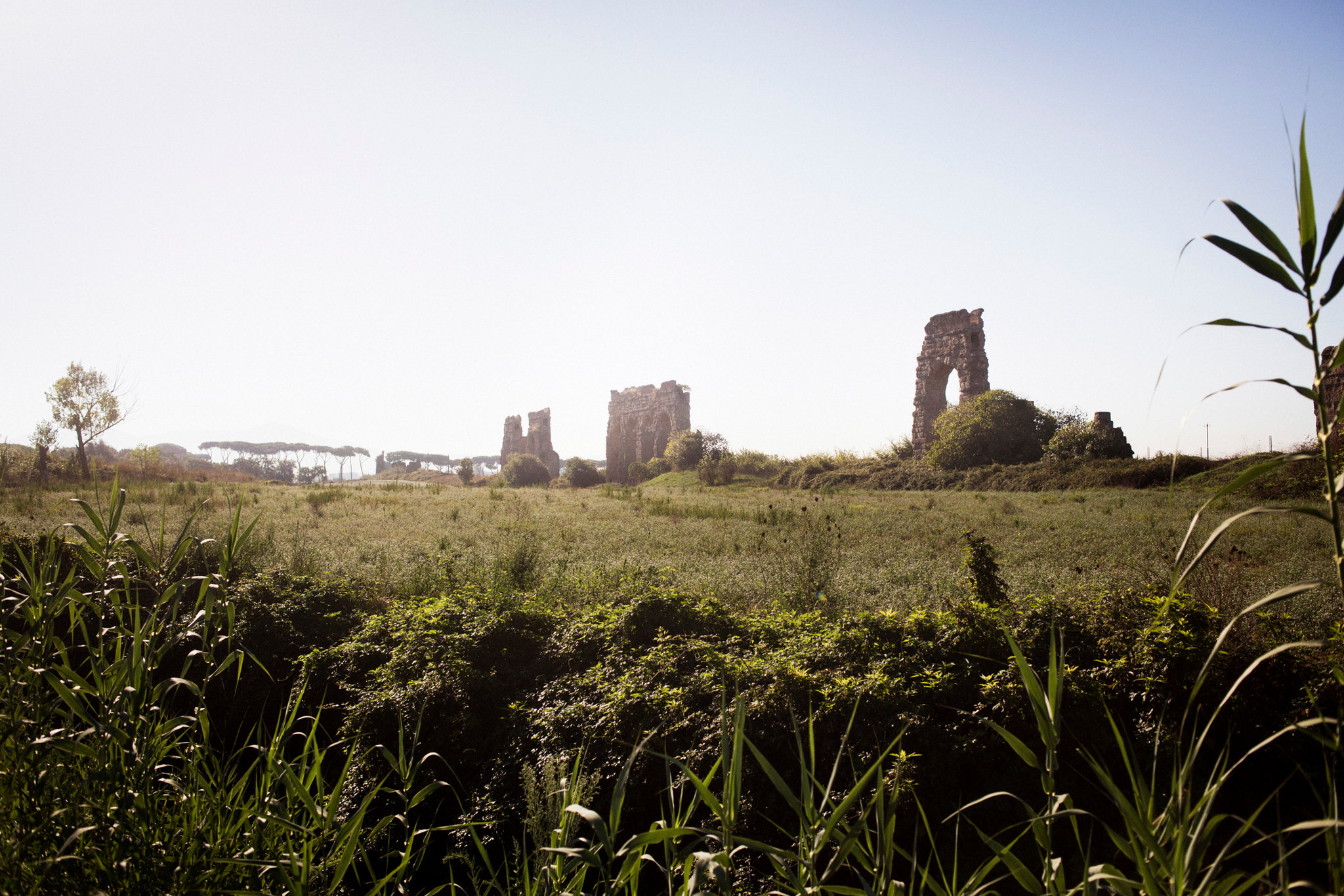 The Park of the Aqueducts in Rome, which includes the remains of aqueducts dating to antiquity. Credit Gianni Cipriano for The New York Times

The ancient Romans had their own version of Acea; Sextus Julius Frontinus served as water commissioner for the emperors Nerva and Trajan. Worried about drought and fires, he oversaw the construction of emergency reservoirs. Water leakage was a problem then, too, but vandals and thieves were punished.

Except for a dry spell in the Dark Ages, the constant current of clean drinking water has for centuries astonished visitors to Rome. The water carried by 35 miles of graceful aqueducts from Lake Bracciano to Rome reminded the 18th-century German writer Johann Wolfgang von Goethe of conquerors returning triumphantly to the city.

“It is the most peaceful of benefactors that enters with a like power,” he wrote. “And is received with immediate gratitude and admiration for its long and strenuous march.”

The campaign has gotten tougher. A general lack of rain followed by short but concentrated storms means more surface runoff and less infiltration into the underground water supplies.

Also, the recent absence of snow cover on the Apennine mountain range that is the main source of Rome’s water means less water has seeped into the city’s aquifers.

Beyond Rome, blistering temperatures have set off wildfires that have driven residents and tourists in Sicily into the sea, where boats waited to evacuate them.

Similar disasters have swept southern France, Spain, Portugal and Croatia in this dry, scorching summer. In Italy, firefighters have doused fires across the country, including in areas around Rome.

“Rome must not be left alone to face this environmental disaster,” Ms. Raggi said as she toured one area hit by fire. But ultimately it is the sky, gloriously and frustratingly clear, that has proved most uncooperative.

Even Mr. Giordano, the geologist who studies water for a living, is having a tough time adjusting to the depletion in this ancient land of aquatic plenty.

“I grew up with the feeling that the water in Rome was always flowing,” he said, adding that when news of the possible water rationing hit, he thought: “Wow. In Rome.”