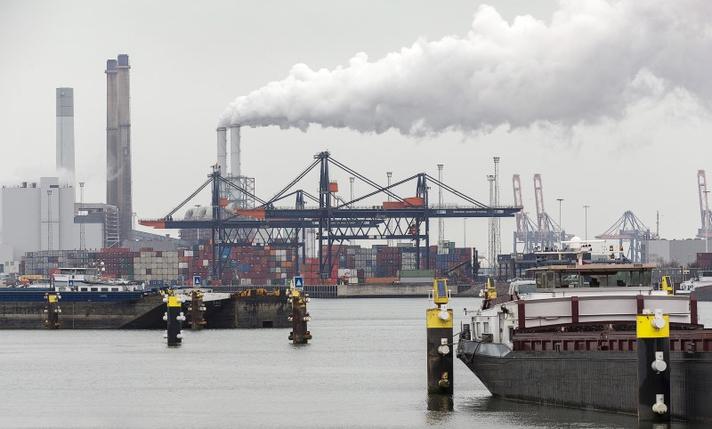 A container terminal is seen in the port of Rotterdam, the Netherlands, March 21, 2016.
Reuters/Michael Kooren/File Photo
A scheme to collect millions of tonnes of greenhouse gases and bury them under the North Sea off the coast of Rotterdam is Europe's best hope of showing it can make carbon capture and storage (CCS) technology work...

Rotterdam, Europe's largest port, is the home to the sole survivor of a dozen European Union pilot plans to test CCS technology that has been thwarted by years of false starts.

Fossil fuel and mining firms need to make CCS work if they are to avoid being left with "stranded assets", or energy resources whose value has to be written off because they fail to meet regulatory rules.

Scientists say the technology is essential if the world is to meet targets to curb global warming because fossil fuels cannot be phased out quickly enough.

However, industry has so far been reluctant to pay upfront costs to get the technology running.

But that mood is changing as industry concedes that CCS is cheaper than abandoning assets and as political pressure grows following December's Paris Agreement on climate change.

Political backing is particularly strong in the Netherlands following a court ruling that it must act faster to cut greenhouse gases.

"We are extremely positive it will materialize," Allard Castelein, chief executive of the Port of Rotterdam Authority, told Reuters, adding he expected a final investment decision on the 500 million euro ($555 million) project this year.

"If there's one port anywhere where this should be achieved, it should be Rotterdam."

Rotterdam has an existing network of pipes that can be used for carbon shipments. Its location makes it easily accessible to Belgian and German as well as local Dutch industry, differentiating it from the abandoned EU schemes.

Future expansion could mean shipping carbon dioxide from international industry through pipes or on tankers into the giant harbor near disused offshore gas fields that could store hundreds of millions of tonnes.

Named ROAD after the Dutch acronym for CCS demonstration, the pilot project would capture around 1 million tons of carbon emissions per year from a local coal-fired power station over a three-year pilot phase. It would compress them, then pump them into a depleted gas field.

The Rotterdam power station is owned by Uniper, the unit into which Germany's E.ON has spun off its coal and gas-fired power stations.

It and French power company Engie have jointly invested 100 million euros into the project. Other funds come from the Dutch government and the European Commission.

Hans Schoenmakers, a director at Uniper and at ROAD, said that backing from the Dutch government and European Commission gave him confidence.

"There is a general belief there is no way around it," he said. "We have to meet targets for CO2 reduction."

However, the definitive go-ahead might take until early next year, he said.

That would allow time for an expected Dutch government decision on a phase-out of coal-fired generation, which analysts say would exempt the Maasvlakte plant integral to the ROAD CCS experiment. Uniper spent 1.6 billion euros on its new Maasvlakte unit opened in May.

Globally, oil-rich Canada has led the push for CCS with Saskatchewan Power's (SaskPower) [SSPOW.UL] Boundary Dam project, which in 2014 became the first large-scale CCS project at a coal-fired plant.

The project draws economic justification from being close to oilfields. That means captured emissions can be injected to help recover more oil, although it triggers opposition from environmental campaigners who say it only serves to prolong fossil fuel use.

In Europe, industry complains it has little incentive to invest in CCS when burning coal, the most carbon-intensive fossil fuel, remains cheap because pollution permits on the EU Emissions Trading System (ETS) are stuck at around 5 euros per ton in an oversupplied market.

As the pressure to act builds, however, it is seeking ways to generate revenue from schemes to lower emissions.

The world's largest steelmaker ArcelorMittal has begun work to create bioethanol from steelmaking emissions at its plant in Ghent, Belgium, by using bacteria to trigger a chemical reaction.

The bioethanol can be used as fuel and hence generate cash, while reducing the carbon intensity of steel-making and displacing fossil fuel.

But once the biofuel is burned, it releases the carbon dioxide from which it was made, meaning projects to re-use carbon still need to be matched with CCS to eradicate the emissions permanently.

Stuart Haszeldine, a CCS professor at Edinburgh University, says it is essential to establish CCS through trial schemes, such as the one in Rotterdam that begin small but can grow to achieve economies of scale and connect to other projects.

"If this does not happen, then, logically, all the carbon extracting companies should gradually become defunct," he said.