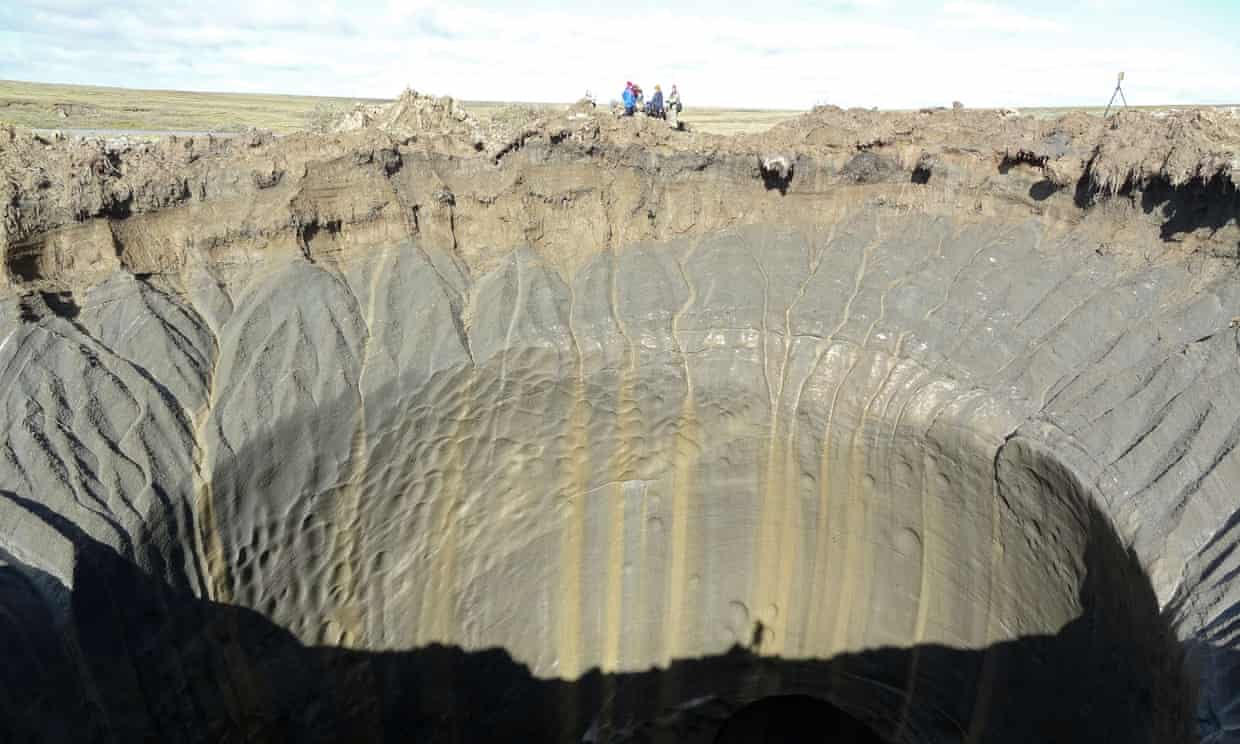 The seven holes discovered are not the work of aliens or meteorites, but rather explosions of methane accumulated as underground ice melts...

(video transcript) It’s called the “Gateway to the Underworld” by local Yakutians. It’s a giant Siberian crater in the coldest area of the world that doesn’t get as much publicity as its more recent counterparts but, because of its size and rapid growth, may be the most dangerous of all. It has spawned scary terms like “megaslump” and “scar zones.” It’s the Batagai crater and it’s making geologists and Siberians very nervous.
Batagaika itself struck my imagination – its size is amazing, the crack itself is perfectly exposed, uncovered, all the layers are perfectly visible and can be thoroughly studied …


Geology professor Julian Murton of the University of Sussex describes the crater as seen on his recent trip to the village of Batagai in the far northern reaches of the Sakha Republic (and thousands of miles east of the Yamal peninsula craters). He is conducting a long-overdue “pilot” study of the Batagai crater, which formed in the 1960's after a loggers cleared the area to make way for a road to an industrial area. The newly-barren land caused the permafrost underneath to thaw and collapse … and collapse and collapse some more. The “gateway to the underworld” is now over 1 km long, 300 feet deep and growing at a rate of over 50 feet per year.

The scary nickname is deserved not just because it’s big and deep … the Batagai crater is making noises too as it consumes large chunks of the area on a regular basis and drops them deep into its netherworld. Professor Murton and his team are cautiously venturing in and around it because he’s concerned that this “megaslump” – a massive void in the permafrost – will continue to sink into the “saturated slurry” underneath. He fears peering into the crater is not just a look into Siberia’s past but also into its future.
I expect that the Batagaika megaslump will continue to grow until it runs out of ice or becomes buried by slumped sediment. It’s quite likely that other megaslumps will develop in Siberia if the climate continues to warm or get wetter.

There’s that word again … climate. Is the Batagai crater a gateway to hell or a symbol of the hell that awaits as the coldest spot on Earth warms and the planet slowing collapses? Is Siberia in a megaslump or are we … striking out at every attempt to get to first base on climate change? Murton has one last thought as he studies what happened during the last Ice Age.
If we can understand how the landscape was altered then, it helps us to anticipate what may happen to Siberian permafrost terrain in the next centuries.
Is there enough time?

Russian scientists have now discovered seven giant craters in remote Siberia, a geologist told AFP on Thursday, adding that the mysterious phenomenon was believed to be linked to climate change. 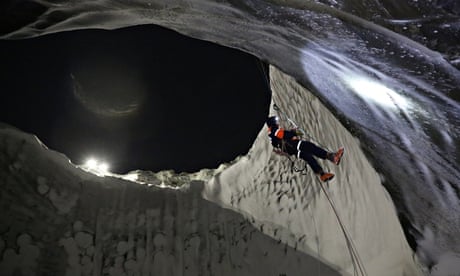 The discovery of an enormous chasm in a far northern region known to locals as “the end of the world” in July last year prompted speculation it had been caused by a meteorite or even aliens.

A YouTube video of the hole went viral and a group of scientists was dispatched to investigate.

“We have just learnt that in Yakutia, new information has emerged about a giant crater 1km [0.6 miles] in diameter,” the deputy director of the Oil and Gas Research Institute of the Russian Academy of Sciences, Vasily Bogoyavlensky, told AFP.

He said this brought to seven the number of reported pits.

“Footage allows us to identify minimum seven craters, but in fact there are plenty more,” he said.

All of the craters have been discovered in the remote, energy-rich Yamalo-Nenetsky region in north-western Siberia.

Scientists say that rather than aliens or meteorites, the holes are caused by the melting of underground ice in the permafrost, which has possibly been sped up by rising temperatures due to global warming.

“The phenomenon is similar to the eruption of a volcano,” said Bogoyavlensky.

As the ice melts, methane gas is released, which builds up pressure until an explosion takes place, leading to the formation of a crater.

The scientists are still trying to estimate what danger, if any, is posed by the holes. Methane is extremely flammable and at least one of the craters is situated near an exploited gas deposit.

An expedition is planned to the latest crater discovered to determine if it was formed in the same manner.

It may be hard to identify other craters which may have formed into lakes over time, said Bogoyavlensky.

“When they appear the craters are empty, and little by little they fill up with water. In the space of two or three years they become lakes and it is difficult to study them.”

He said some may have formed dozens or hundreds of years ago, but went unnoticed in such remote regions.

Current Article on the Weather Channel: Massive Crater in Siberia Is Worsening Due to Climate Change, Scientists Say...