SANTA IN TROUBLE? REINDEER SHRINK IN ARCTIC AS CLIMATE CHANGES... 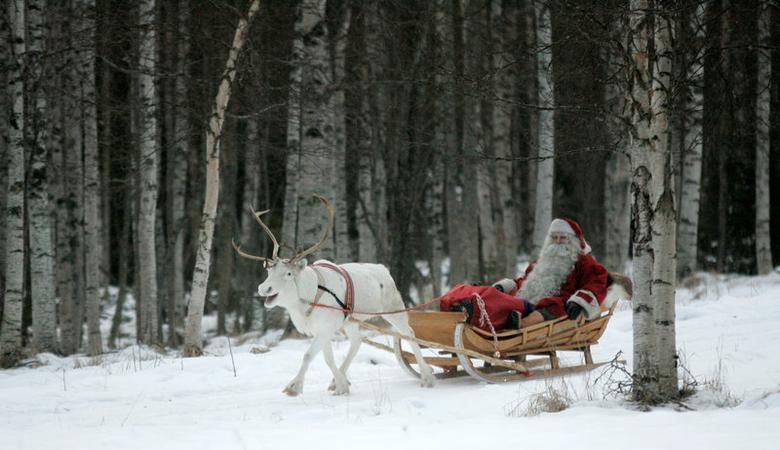 A man dressed as Santa Claus rides his sleigh as he prepares for Christmas on the Arctic Circle in Rovaniemi, northern Finland, December 19, 2007. REUTERS/KACPER PEMPEL/File Photo
Reindeer are shrinking on an Arctic island near the North Pole in a side-effect of climate change that has curbed winter food for animals often depicted as pulling Father Christmas' sleigh, scientists said on Monday...

The average weight of adult reindeer on Svalbard, a chain of islands north of Norway, has fallen to 48 kg (106 lb) from 55 kg (121 lb) in the 1990s as part of sweeping changes to Arctic life as temperatures rise, they said.

"Warmer summers are great for reindeer but winters are getting increasingly tough," Professor Steve Albon, an ecologist at the James Hutton Institute in Scotland who led the study with Norwegian researchers, told Reuters.

Less chilly winters mean that once-reliable snows fall more often as rain that can freeze into a sheet of ice, making it harder for the herbivores to reach plant food. Some reindeer starve and females often give birth to stunted young.

In summer, however, plants flourish in a food bonanza that ensures healthy females more likely to conceive in autumn - a pregnancy lasts about seven months. The wild herd studied had expanded to about 1,400 animals from 800 since the 1990s.

"So far we have more but smaller reindeer," Albon said of reindeer on Svalbard, about 800 miles (1,300 km) from the North Pole. The rising population also means more competition for scarce food in winter.

He noted that one popular children's' book, "Father Christmas" by Raymond Briggs, showed a sleigh pulled by two reindeer. If the animals are smaller and weaker, "will two reindeer be sufficient?" Albon asked.

Arctic temperatures are rising faster than the world average amid a build-up of greenhouse gases in the atmosphere.

Most studies of global warming around Svalbard have focused on polar bears that hunt seals at sea, rather than year-round land residents led by reindeer, Arctic foxes and Svalbard rock ptarmigan birds.

Arctic fox numbers have risen slightly because they thrive in severe ice winters by scavenging dead reindeer, said Eva Fuglei, a researcher at the Norwegian Polar Institute and the Fram Centre who was not involved in the reindeer study.

"All the weak reindeer die - the sick, the elderly and calves," she told Reuters. But that means foxes struggle to feed the next winter because only the fittest adult reindeer have survived.